Gelek Rimpoche passed away in February 2017 at the age of 77. Dimitri Ehrlich remembers his teacher’s generosity. 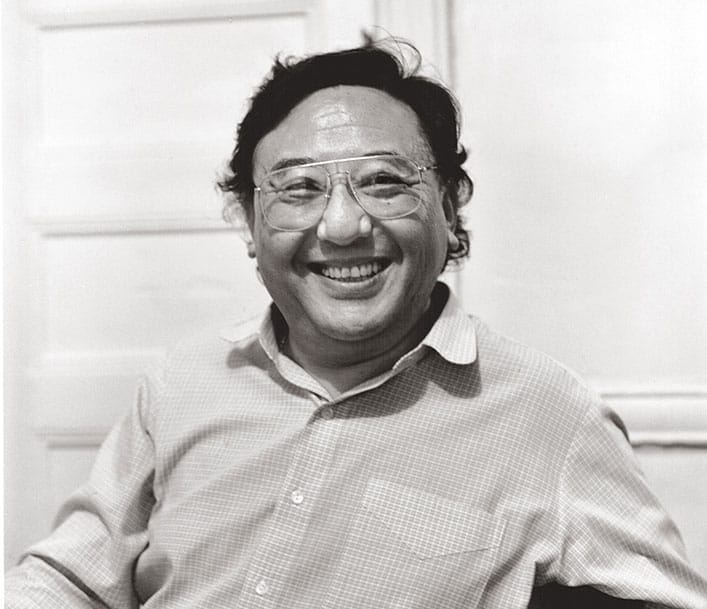 The first time I met Gelek Rimpoche, he took my head in his hands and head-butted me. I had just asked him this question: “Is it true that on some level, pain and pleasure are the same thing, and we just project these labels onto an otherwise neutral experience?”

I can still remember the shock of his forehead tapping mine. Then he said, “Pain is also pain. Pleasure is also pleasure. You have read too many different books. Read one book, do one meditation practice.” Years later I learned that it was an auspicious sign for a Tibetan lama to touch his head to the head of a student. At the time, I was just stunned.

I had the great opportunity to spend the next twenty-nine years as Rimpoche’s student. He called us his friends, but I never had any doubt that I was in the presence of a fully enlightened being.

As a member of the Thirteenth Dalai Lama’s family, Rimpoche was part of a great landowning clan that had enormous wealth and power. Recognized as an incarnate lama at the age of four, he was educated by the last generation of Tibet’s great masters. By the time he was a teenager, Rimpoche was head abbot of Drepung Monastery, with 13,000 monks under his tutelage.

In the wake of the Communist Chinese invasion of Tibet, Rimpoche fled to India in 1959. He lost his monastery, his family, and his country. He arrived in India penniless. He endured hardships and physical abuse and loss on a scale most people cannot even imagine. But he didn’t indulge in bitterness.

In every teaching he gave, no matter how difficult the practice was, the message was always there: relax. Have a sense of humor. Be gentle and precise. Enjoy life. And always be kind to yourself.

Although he briefly visited America in the 1960s and ’70s (he was part of a team of young Tibetans sponsored by the CIA and was first invited to America to study at Cornell), it was not until the mid 1980s that he settled in Michigan and formally founded Jewel Heart. Rimpoche taught tirelessly, offering multiple retreats and initiations every year, sharing everything from Buddhism 101 to the most profound teachings of tantra. He was especially known for his connection to the healing practice of White Tara, which he shared widely.

In every teaching he gave, no matter how difficult the practice was, the message was always there: relax. Have a sense of humor. Be gentle and precise. Enjoy life. And always be kind to yourself.

I can still hear his raspy voice saying these words: “Everything is impermanent. Death is a reality to which none of us is immune. Death is nothing other than a separation of the body and mind.” He always said that the human body is like a rented apartment and the mind is the tenant; eventually the roof starts to leak and the plumbing won’t work so reliably. The building that housed Rimpoche’s magnificent, rare, blazing constellation of a mind—generous and dazzlingly brilliant—had been through a lot in seventy-seven years. Over the past year, although he spent a lot of time in the hospital, he never lost his sense of joy and gratitude for life.

The mind of our teacher is alive and strong within us. Rimpoche is here every time we feel compassion or show kindness to one another. That is his mind at work: playful, brilliant, alert, and always teaching. Always sharing. Always generous.

Dimitri Ehrlich writes for Interview, The New York Times, and other publications. He is a multi-platinum songwriter based in New York City.