As a Zen priest and a neurosurgeon, Dr. Patrick Codd investigates the truth of suffering on a daily basis. 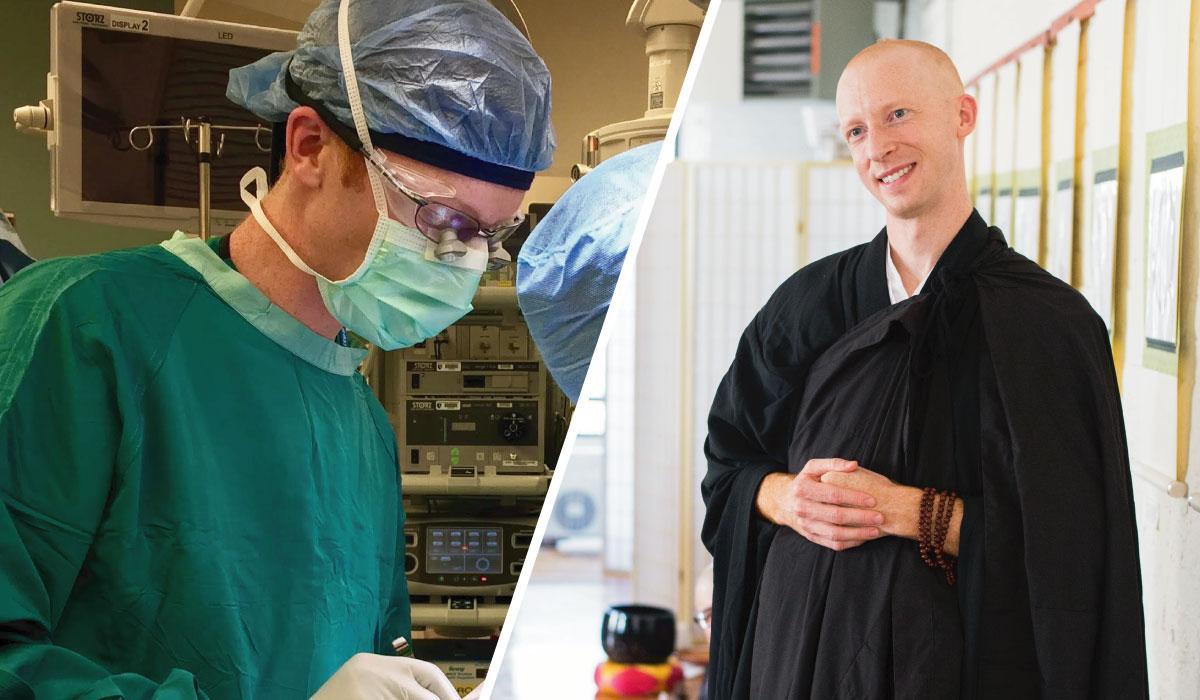 Dr. Patrick Codd in his role as a neurosurgeon (left), and as a Zen priest (right).

Patrick Codd has many outfits: the white lab coat of a doctor, the robes of a Zen priest, and the scrubs of a brain surgeon. Whatever he’s wearing, he thinks about the Buddha’s first teaching: the truth of suffering.

Codd has a clinical practice at Duke University Medical Center in North Carolina, where, he says, his work puts him “on the front lines of human suffering.” Each day, he attends to patients with brain tumors, head traumas, and hemorrhages, tragedies that parallel what he studies in his Zen practice: impermanence and the inevitability of death. Codd says that, together, his medical and Zen practices have taught him — and others — a great deal of compassion.

Codd grew up in Fort Collins, Colorado. Browsing the shelves at his local bookstore, he came across Robert Pirsig’s classic Zen and the Art of Motorcycle Maintenance. The book, he says, gave him an existential crisis. Shortly after, he moved to the West coast for school. An eighteen-year-old feeling scared and lost in a new place, Codd visited the Zen Center of Los Angeles for their introduction to Zen meditation. As he sat in the lobby waiting for it to begin, the center’s abbot, Wendy Egyoku Nakao, walked up to him.

“I’ll never forget the look in her eye,” says Codd, “How incredibly present she was when she stared me down and asked ‘How are you doing?’ … Perhaps that was the koan for the moment. That’s when my Zen practice really started.”

The Zen practice was naturally in tune with dealing with the very difficult things that came up in the hospital.

After graduating Caltech, Codd moved to Boston, Massachusetts to attend Harvard Medical School. He soon found his current teacher Josh Bartok Roshi with the Greater Boston Zen Center where he continued his practice. In Boston, Codd did a neurosurgery residency at Massachusetts General Hospital. It was there that he began to realize the connection between Zen and medicine.

“I was being asked to face a great deal of suffering — very real physical, anatomical, and emotional travesties,” says Codd. “That was when I found that the Zen practice was naturally in tune with dealing with the very difficult things that came up in the hospital — being able to sit and allow what is coming up to come up, and to turn toward it.”

Neurosurgery, says Codd, is a historically conservative field that leaves little room for self-reflection. When the field first started, the mortality rates were so high, says Codd, that people learned to deal with their experience by turning away from their pain.

“I think it’s an intrinsic self-defense mechanism that has been woven into the fabric of neurosurgery,” says Codd, “to select for people who can suppress or push away emotions just to be able to do the work.”

The same hurt, aversion, and disorientation that comes up in clinical practice also comes up in Zen meditation. Buddhism has taught Codd that he must turn towards the suffering with compassion.

“I see a lot of patients who are affected by very severe problems with their brain that have caused aspects of who they think their permanent self is to change,” he says. 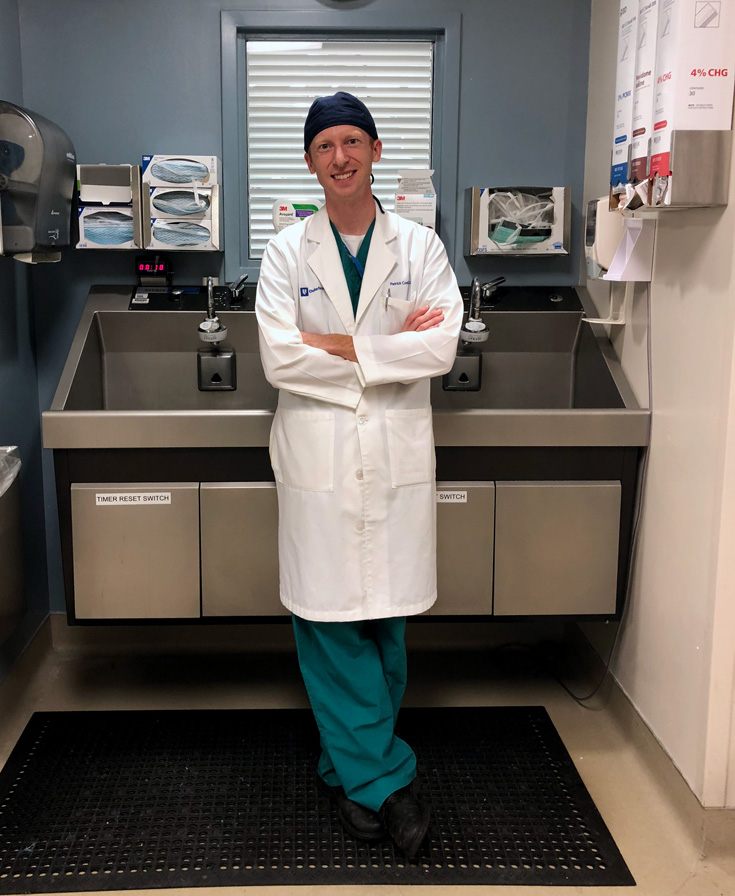 Codd watches his patients directly face the reality of experience: changes to their ideas of normality and morality; how they interact with their family and society; and their physical ideas of time and space.

“It’s always like, Ah, yes, here this is. Here is this impermanent self. The reality of suffering old age, and death,” says Codd. “It becomes a mirror back to me and to my fellow clinicians about how we ourselves can be deconstructed, and how impermanent our ideas of self are.”

When Codd began his neurosurgery residency, he felt that medical school hadn’t properly prepared him for the suffering he and his pateints faced. He had one or two classes that addressed doctor-patient interaction, but nothing had equipped him to sit across from the family of a patient in the early hours of the morning to tell them their loved one had been pronounced brain dead.

“I was in the emergency room for hours at a time, seeing one person after another with devastating neurologic injuries,” says Codd. “I realized that no one seemed to actually care about me at all. I was trying provide compassionate care, but I felt like ‘How could I possibly provide compassion for others if I didn’t feel it myself?'”

Codd wasn’t alone in these feelings, and often found classmates in the stairwells of the hospital in tears.

Today, he also teaches at Duke University School of Medicine, where he aims to ensure residents have a place to voice the suffering they’re dealing with. He created a monthly event for residents to meet and engage in hour-long open dialogue on the difficulties that arise in their daily work lives. Originally, he called the meeting “Encountering Suffering,” but it was changed to the more “medically sterile,” title, he jokes, of “Difficult Case Conference.” In the meeting, Codd invites the residents to acknowledge the suffering they’re experiencing, whether it be the memory of a patient they declared dead the night before, fears around making a decision about patient care that may have led to a negative outcome, or difficulties in their personal relationships due to the strains of their work. Codd simply wants to serve as someone to listen, and to be present with what arises.

“They’re facing all of these new and terrible situations that they’ve never seen before in their entire lives, and there’s no one there to listen to them,” says Codd.

The space has no intention, no direction, and no one is required to be there, says Codd, but he’s always amazed at the attendance. At his first session, he expected to sit in the room alone, but the entire residency showed up.

Often my seven-piece robe is a set of scrubs or white coat.

“We talk about how these things that come up are all extremely important because it reminds them that amidst all of the data, the numbers, the CAT scans, the lab values, and the neurologic exams, that the patients are still human beings. The kindness needs to start with themselves, so that it can then be available for their patients.”

Codd also holds a weekly general sitting group for the Duke community, for anyone interested in learning and practicing meditation. In his personal life, he tries to sit as much as he can — usually at home in the early hours of the morning.

He says one could look at his work as almost a clinical-pastoral role, but the ways in which his Zen priesthood plays into his daily interaction depends on the situation.

“There are moments where it’s appropriate to function as the Zen Buddhist priest, who can discuss aspects of the dharma and sitting,” says Codd, “And then there are moments when it’s absolutely not — when a patient is suffering from a very difficult situation, or their particular cultural or ethnic or religious background makes that inappropriate… In those moments, I do what I can to be what they need. That may not be the robes and malas. It may just be the white coat sitting next to their bed, listening to their heart, doing a neurologic exam, and reassuring them that we’re hopefully going to help their pain. That’s how the practice looks like to me in that moment.”

At Codd’s ordination at the Greater Boston Zen Center last year, he proposed a Zen koan while speaking to those in attendance: “Why do you put on your seven-piece robe at the sound of the bell?”

“Often my seven-piece robe is a set of scrubs or white coat,” he says, “But really, for all of us, it’s the invitation to be the bodhisattva. To be that compassionate person reaching out to the world to help amidst suffering.”