Jaimal Yogis, the author and surfer behind the book Saltwater Buddha, on riding Buddhism’s “three vehicles.” 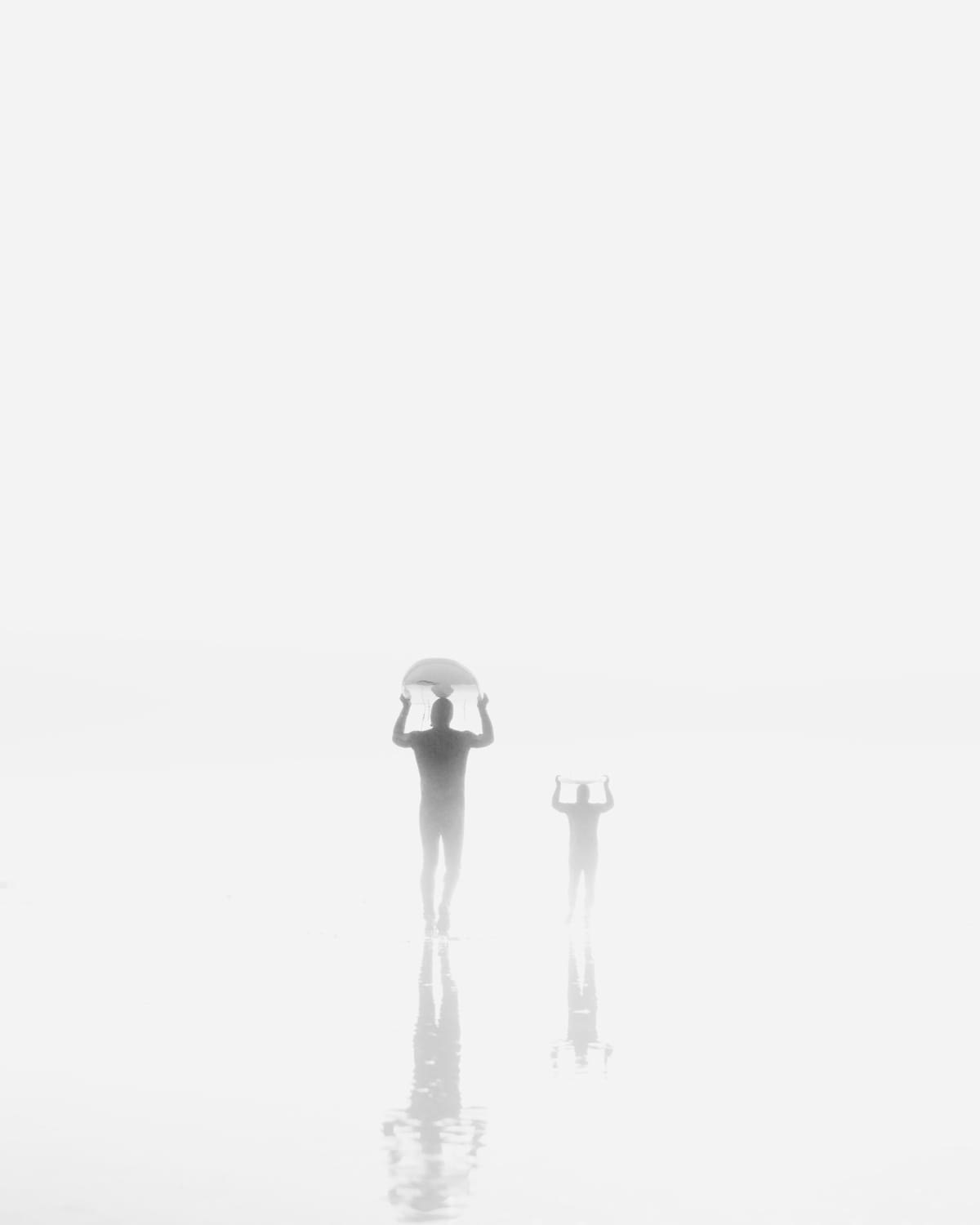 When I was nineteen, I went to live in a Ch’an (Chinese Zen) Buddhist monastery, hoping to become a monk. I didn’t. After about a year of the 3:30 AM wake-up bell and one meal per day, I took on another archetypal path of freedom: surf bum. To keep up my dharma study, I went on to major in philosophy and religion at the hub of east-west wisdom and flip-flop fashion, the University of Hawaii, and ended up developing my own, surf-inspired study aids.

Now, the Buddha’s goal was to help everyone else, too, become a Buddha, meaning that they would experience awakening, and even awake-ness. He seems not to have particularly wanted Buddhism, per se. He referred to his teachings as being like a raft to cross the river of suffering; it’s a tool that we can let go of once we get to the other side, but in the meantime, we won’t get there without it.

Where he spoke in terms of a raft, I speak in terms of surfboards. There are infinite Buddhist paths and tools that can be sorted into three major schools or “vehicles:” Theravada, Mahayana, and Vajrayana. Like different shaped surfcraft — longboard, fish, thruster — these three vehicles have noticeable differences in appearance, feel, and substance. But they have the same goal and offer us helpful ways to navigate life’s wild seas. 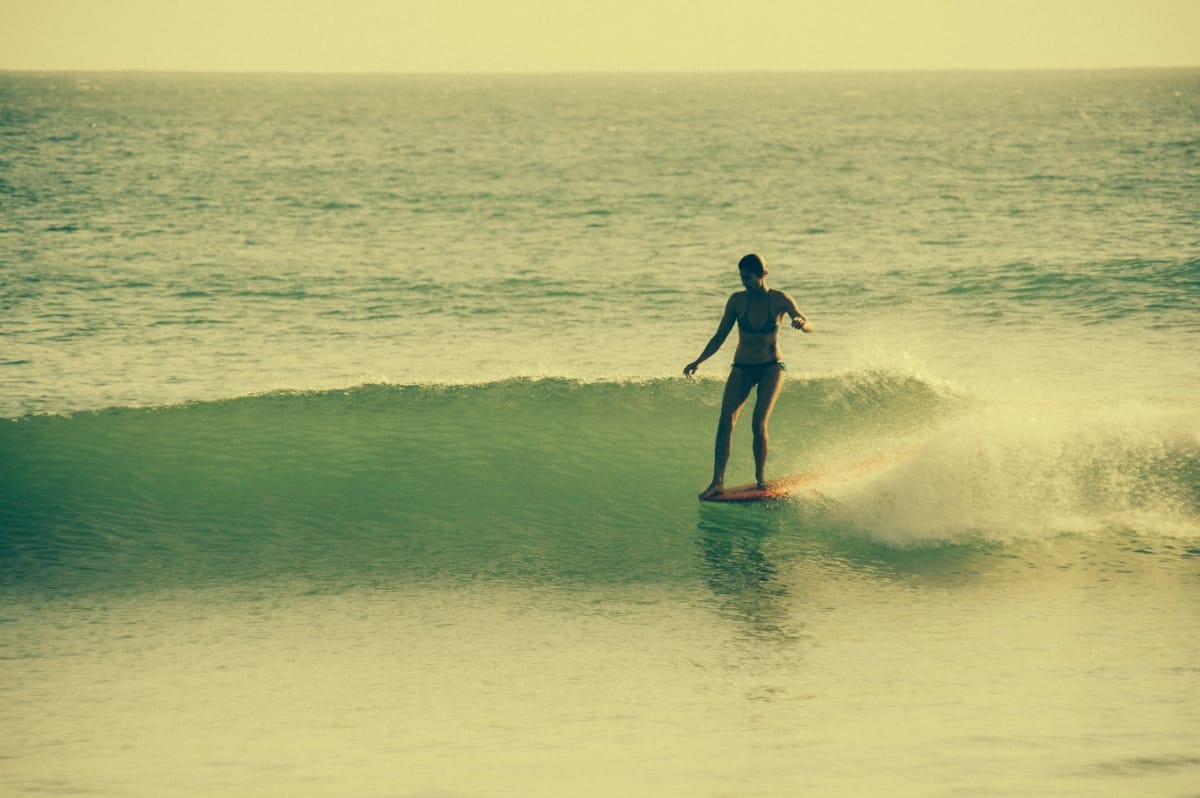 Surfer Belinda Baggs, at ease on the nose of her longboard in Sri Lanka. Photo by Nathan Oldfield.

Theravada: Domain of the Soul Surfer

Theravada, which means “Way of the Elders,” is the earliest form of institutionalized Buddhism. It’s a style based primarily on talks the Buddha gave during his forty-six years of teaching. These talks were memorized and recited (before the internet, people could still do that) until they were finally written down a few hundred years later in Sri Lanka, where Theravada still dominates – and where there is also superb surf. In the US, Theravada mostly manifests through the teaching of Vipassana, particularly its popular meditation technique, mindfulness, the awareness of what is happening now — thoughts, feelings, sensations — without judgment or attachment.

2. Our constant desires make it stressful.

4. Living compassionately and mindfully is the way to attain this freedom.

About those “constant desires”: Theravada practitioners don’t try to stop desire cold turkey. They use mindfulness to observe — and drift in — the waves of desire as they come into being and pass away. As the practitioner learns how these waves of desire, like all thoughts, form on their own, she learns not to identify with them — “I’m experiencing jealousy, so I’m a jealous person” — and those waves stop holding her under. She becomes more fluid and free, more like a surfer: letting bad waves pass, and riding a few good ones before letting those dissolve too.

To do this, early Theravada practitioners often thought it best to take a complete break from the rat race by becoming a monk or nun. So in college in Hawaii, I thought of the Theravada monk as akin to an intrepid longboarder on an old wooden single-fin. This soul surfer looked at the crowds struggling through life’s raggedy swells, competing for position and sponsors, and said, “Y’all have fun with that!” Then it was off to surf an empty cove, communing with anemones and whistling a tune. 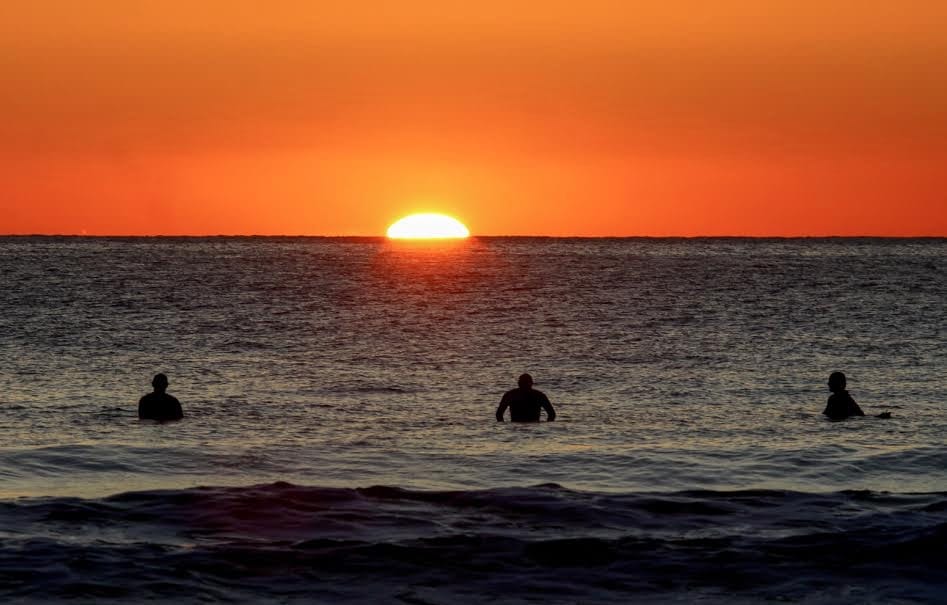 Mahayana, Realm of the Lifeguards

The Mahayana, or “Great Vehicle,” is the Buddhist Airstream, a vehicle large enough to hold a number of boards, ancient and modern. Zen, Pure Land, secret Tantra traditions — they’re all cruising in the Great Vehicle. (The Tantric schools, however, are also a school unto themselves which I’ll discuss in the next section.)

These Mahayana schools are based mostly on Sanskrit texts that went on to flourish in China, Japan, Korea, Vietnam, Tibet, and now the West too. In general, they include the Theravada points while shifting the focus from renouncing the “rat race” of desire to seeing “the world” and “freedom” as one. The Mahayana does this by elaborating, in countless ways, on Buddha’s first words after attaining full enlightenment: “wonder of wonders! All beings just as they are whole and complete! All beings are endowed with Buddha-nature! But because of their deluded thinking, they fail to realize it.”

Becoming a Buddha in this context means going so deep into the fundamental nature of mind in meditation that we experience ourselves – seemingly separate waves with firm boundaries – as what we actually are – the entire ocean.

Mahayanists delve into this paradox and conclude that the only difference between a Buddha and an ordinary person is a shift in perspective from the myopic to the vast, a shift that many Zen masters have explained though oceanic metaphors. Hakuun Yasutani said our buddha-nature “is like the sea, and each individual is like a wave on the surface of the ocean.”

Becoming a Buddha in this context means going so deep into the fundamental nature of mind in meditation that we experience ourselves – seemingly separate waves with firm boundaries – as what we actually are – the entire ocean. Some people misinterpret this “non-dual” doctrine as nihilism, negating individual responsibility, which is not the case. As Buddhist scholar Robert Thurman has written, the Buddha “emphasized selflessness when talking with absolutists and he emphasized self when talking with nihilists.” [This is from Thurman’s intro to the Tibetan Book of the Dead.] The Buddha’s primary teaching on self seemed to be breaking from our fixed, views of self and other so we embrace the fluid, changing nature of reality. Going back to Yasutani’s metaphor, when this oceanic perspective — the view of an enlightened being — is lived from, the wave is still a wave with it own direction, uniqueness. But the awakened wave now moves through the sea without fear; what is death when water simply returns to water? The wave also has nothing but love for all waves – from ripples to tsunamis – because all waves are part of its body. All of which brings us to the most important distinction in the Mahayana – the bodhisattva. 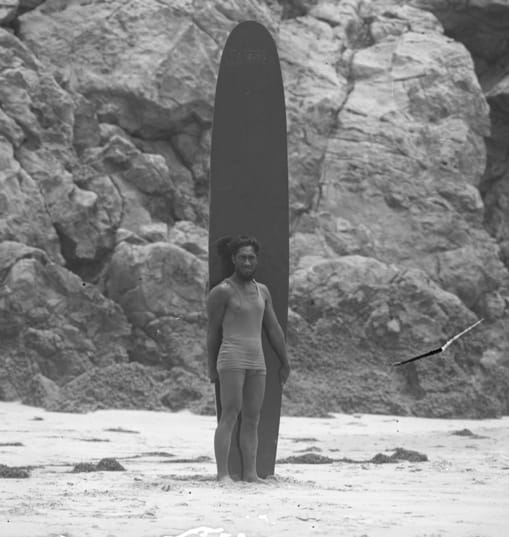 Duke Kahanamoku (1890-1968) not only helped popularize surfing, but modeled the lifeguard’s ideal of selflessness as well. Kahanamoku, who competed as a gold- and silver-medal-winning US Olympic swimmer in 1912, 1920, and 1924, saved the lives of eight fishermen in Newport Beach’s harbor in 1925. The city’s police chief called this “the most superhuman surfboard rescue act the world has ever seen.” Photo: public domain.

If we are all one, nobody will be truly free until we all are (even though — wink, wink — we already are free now). So instead of emphasizing the bliss of individual nirvana, or liberation, the Mahayana Buddhist vows to become a bodhisattva, who, seeing the equality of things, strives to love all beings like her own child.  To be fair, this ideal was discussed by early Theravada Buddhists in the Metta Sutta too, but the bodhisattva takes this vow a step further, vowing to be reborn in suffering realms indefinitely until every being is free. But while she does this, she keeps in mind the paradox that every wave is already ocean. It’s this meta perspective that keeps her both laid back and intensely compassionate, exactly like — going back to my Hawaii study aids — the North Shore lifeguard. Nearly every lifeguard on the north shore of Oahu is at least as good, sometimes better, than the professional surfers. But instead of competing for money and fame, the lifeguard dedicates all that skill to rescuing drowning beings — who, like me when I surf the North Shore, are in way over our heads. 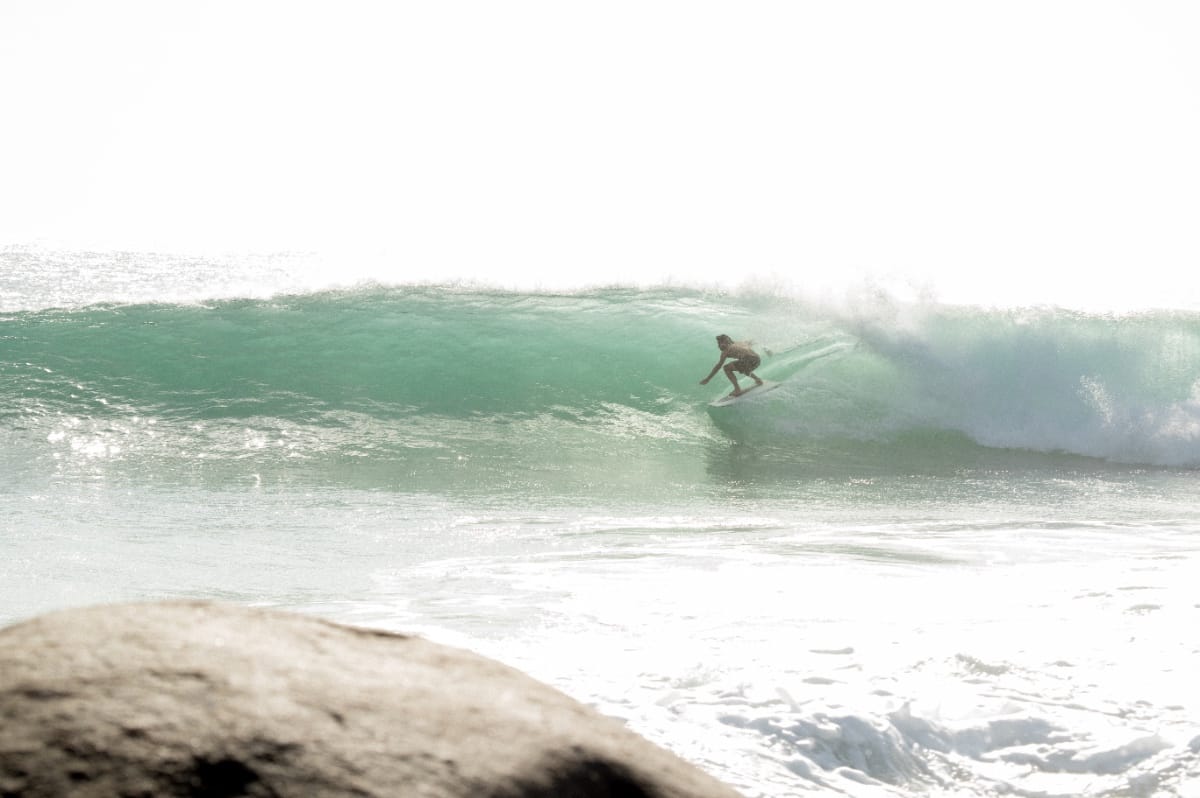 The third major school of Buddhism, the Vajrayana (“Diamond Vehicle”) — which comes to us almost exclusively through the Buddhism of the Himalayas — agrees that the bodhisattva path is ideal. But if the Mahayana highlights non-duality while still generally recommending folks stick to the calm waves of monastery life, the Vajrayana is Buddhism’s X Games. All of those angry deities we see in classic Buddhist art, or the Buddhas and bodhisattvas in amorous embrace with their consorts, are meant to remind practitioners that all of life’s waves — from peaceful to wrathful to lustful — are part of the same sea, all buddha-nature. In many ways this is the similar to the Zen view, but the practice is different. After working at the foundational mindfulness practice and ethics, Tantric practitioners visualize themselves as those various wrathful, lustful, or peaceful buddhas and bodhiattvas. By doing this, the meditator is, in a sense, transmuting the spectrum of worldly qualities and emotions into the non-dual.

All of life’s waves — from peaceful to wrathful to lustful — are part of the same sea, all buddha-nature.

Preparation is key. Just like a surfer shouldn’t go ride forty-foot waves on day one, the Tantric yogi must plunge into the passions gradually and with proper guidance from a teacher. As the modern Tantric master Lama Yeshe pointed out, for “the practitioner of the Highest Yoga Tantra path who has realized the clear light… dirty and clean, avoidance and practice are the same… But if you have not reached this level and try to imitate these experiences, saying that there is no difference between good and bad karma, you become berserk.”

That risk is real. But the goal of Tantra is to see enlightenment in all things, to feel as comfortable bringing mindfulness and compassion into ferocious storm waves or mellow ripples. A tall order, but its seems to be working out for the Dalai Lama, a Tantric monk who maintains the schedule of rock star and politician but seemingly laughs his way through the day. 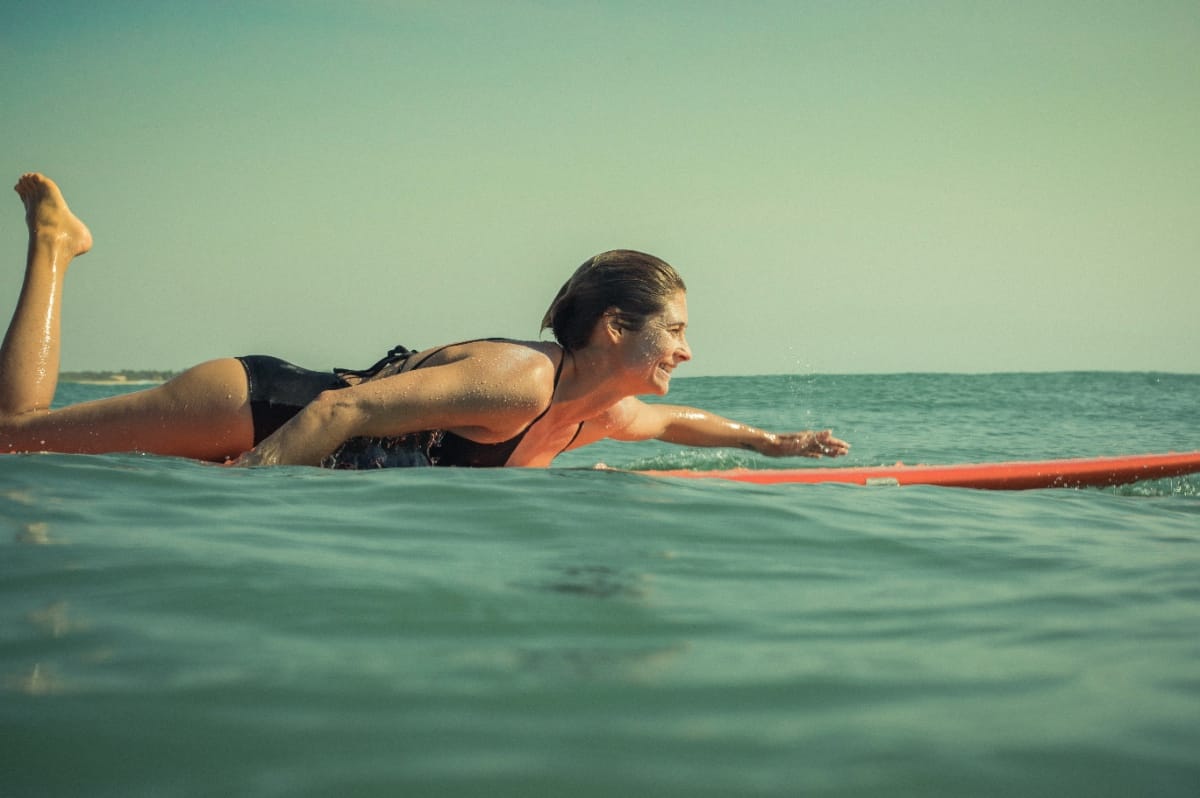 For my Hawaii study aid, I thought of Dave Rastovich as surfing’s Vajrayana bodhisattva. Rastovich is an Australian surfer who lives off the grid, in tune with wilds of Australia. But while he lives off the land, making films about the free surfing life and environmental stewardship, he hasn’t shied away from making his free lifestyle into an image with sponsors and all the rest. But Rastovich uses his fame and surfing for good. Fighting the slaughter of dolphins in Taiji, Japan, he has been there in the bloody seas, putting his own body between the harpoons and the dolphins. In the waves, Rasta shows that all vehicles are valid paths. He is at ease in two-foot waves and in the mouths of twenty-foot tubes.

That was my goal in college — to master all the waves (internal and external) and glean what I could of each dharma vehicle so I might live a happier, simpler life.