If the new film Arrival had you thinking about “Zen circles,” you’re not the only one. Buddhadharma Deputy Editor Koun Franz on the happy accident of the film’s unique approach to alien communication. 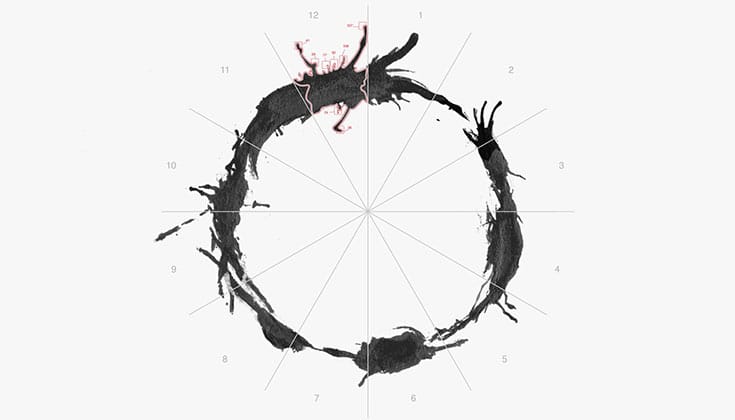 Like perhaps every Buddhist watching Arrival — or at least every Zen Buddhist — I had to smile the first time the aliens revealed their written language, which, it turns out, is the language of enso, the “Zen circle” you see everywhere from classical Zen art to various logos, Buddhist and not.

The aliens, or “heptapods,” use a language that has no word order or punctuation, and as their sentences appear as circles, also no start and no endpoint. According to Eric Heisserer, the film’s screenwriter, each enso-like character is a logogram; These logograms represent words, they represent sentences, and feelings. It’s a total universe within each.”

Part of what’s so great in reading interviews with the author of the original short story, “Story of Your Life,” Ted Chiang, and with Heisserer, is that the filmmakers arrived at their usage of the enso by accident, without any reference to Buddhism — in trying to depict a language that would contain past, present, and future, with no beginning and no end, they stumbled upon a symbol from a religious tradition that holds a very similar view of how time works.

Anyone wanting to dive deep into a Zen conception of time will want to spend some time with Dogen’s Uji (“Being Time”); you’ll find a discussion of this in Dainin Katagiri Roshi’s book, Each Moment Is the Universe: Zen and the Way of Being Time. A sample:

You’ll find a longer excerpt from Each Moment Is the Universe, previously published in Buddhadharma, here.