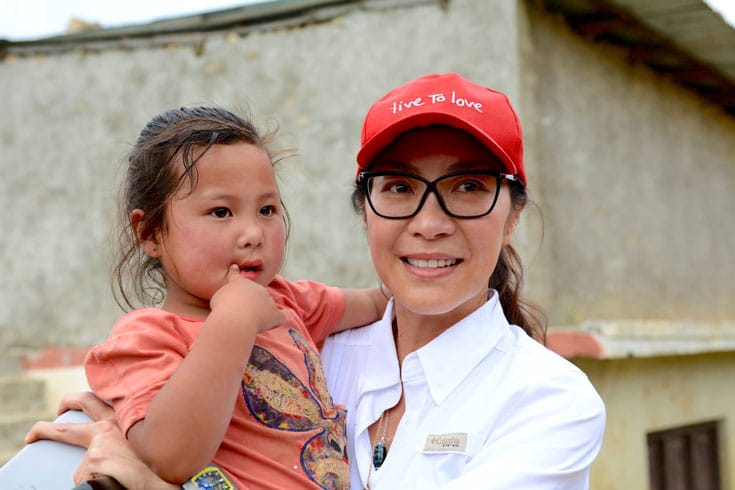 Buddhist actor and activist Michelle Yeoh was in Ladakh last week to offer aid relief in the wake of flash flooding. While on her trip, Yeoh met up with Conde Nast Traveller to talk about her activism and how it relates to her Buddhist practice.

“I think you are always a practicing Buddhist,” she told interviewers. “You are learning every day.”

Yeoh was born into a Buddhist family in Malaysia and maintains a Buddhist practice. “Buddhist philosophy grounds you as a person,” she told the interviewers. “Every one of us, we are always seeking.”

Yeoh — who starred in Tomorrow Never Dies and Crouching Tiger, Hidden Dragon, and has been named one of the 50 most beautiful people in the world and the greatest action heroine of all time — has shifted her focus towards social and environmental activism in recent years. On top of numerous safety and conservation projects, in 2011, she played Aung San Suu Kyi in a biopic by Luc Besson (see our review) and in 2012 she produced a documentary about an epic trek to clear tonnes of litter from the Himalayas.

In April, Yeoh was in Kathmandu when the earthquake hit, killing 9,000 people. “All I could remember was being ushered out of the room where we were,” she told the BBC about the moment the quake hit. “There was no warning. It just hit us.”

She returned two weeks later as an ambassador for Live to Love International, a Himalayan humanitarian organization run by the Gyalwang Drukpa, the head of the Drukpa school of Buddhism.

“I felt there was no need to be afraid,” she told interviewers, through tears. “It was very important to come back, to show appreciation for the people who took care of us. And to show the people in Nepal that we care.”

In Ladakh, as well as raising awareness and working on flood relief, Yeoh visited Live to Love’s animal rescue center and watched shows by local performers.

“It’s very important to appreciate and enjoy what you have, and to share it with others” Yeoh told Conde Nast Traveller. “In Hollywood, you have this very glamorous life, but how do you find balance? You can’t always be materialistic. The spiritual side is the one that balances you and helps you understand that it’s not about the bigger car, the bigger house, or the bigger role. You’re always chasing something. You have to find something.”