Here, Laura MacKenzie introduces us to Adrian Fish, a young Buddhist photographer. While working on a photography project, Adrian Fish says, he is in a state of tension. If he’s satisfied with the result, the tension releases. “And that’s an uncomfortable feeling,” he says, “this state of not having tension.” 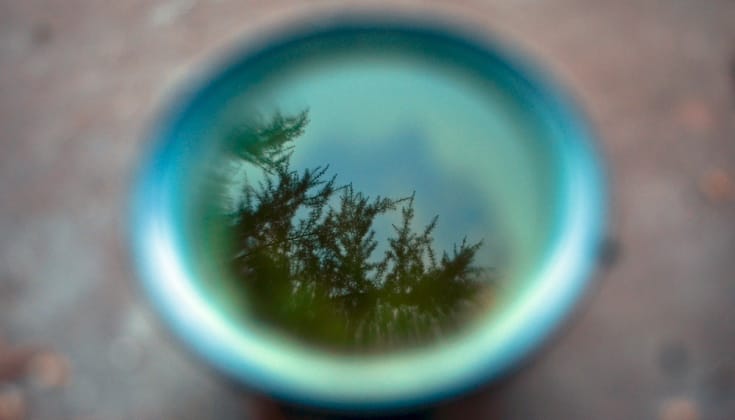 “On the one hand,” Fish says, “we think we don’t want challenge, but when we don’t have that challenge we feel very agitated and upset, and we usually create some challenge for ourselves.”

Fish shot his first roll of film at fifteen, a series of black-and-white photos for a school project. “I was expecting great results,” he says. “I had this idea in my mind of what was going to happen.”

The pictures didn’t turn out as he’d hoped. “I was very disappointed in my own quiet, internal way,” he recalls. “But I figured, ‘I’ve got to learn more about this.’” Having so much to learn was part of what got him hooked.

Fish, now thirty-two, also encountered the challenge of expectation and frustration in Buddhism. He became interested in Buddhism at sixteen, and attended a meditation course that gave him an “easily digestible” introduction to sitting practice. Later, at a retreat, he says he was caught off guard by the “excruciating” schedule of meditation and work. Physically and mentally exhausted, he swore he would never do it again.

That changed. The memory of his discomfort faded in a couple weeks, and spontaneously, he decided to give meditation another shot.

“I think I was a little more flexible in my mind,” he says of his second attempt. “I wasn’t so rigid in what I was expecting or what I thought would happen.” Now Fish is training to be a priest at the Atlantic Soto Zen Center in Halifax, after moving from Toronto in 2004. He’ll be ordained this summer.

Too often, Fish says, people want to see quick, easy results. He has learned that in both photography and Buddhism, the value is not just the end goal— it’s the process. As an assistant professor of photography, Fish’s awareness of process comes through in the way he teaches. He evaluates students’ attitudes and how they deal with challenges, as well as their finished work. He has also learned to give his students the freedom to make their own choices, even when he disagrees with them.

“I can make suggestions,” he says. I can offer a certain degree of challenge. But ultimately that’s not my job—I can’t control what another person does or thinks.”

Fish’s latest project, “Staged,” is a series of pictures taken from the stages of empty theaters, looking toward the seats. He was inspired when he accidentally opened the door to a third-story balcony in an empty, 1,200-seat theater. Fish says this perspective captured the “vastness, emptiness, and even anxiety” he felt at that moment.

Fish says people should do whatever they feel compelled to do to make the world better. For him, it’s a lot of little things; how he treats people, and tries to improve himself. He believes that his meditation and art are ways of effecting positive change, but he can’t explain how. “How am I benefiting people by doing this?” he asks. “Maybe I’m not, maybe it’s completely meaningless. But somehow, deep down, I don’t feel that way.”

Click here to learn more about Adrian Fish and to see his photography.