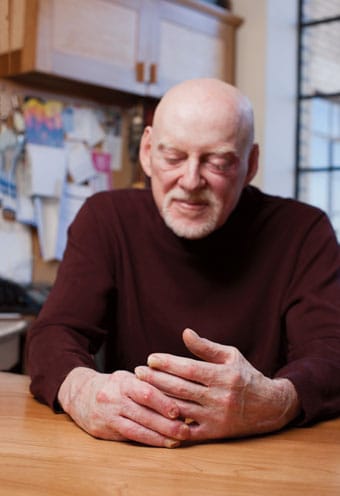 “Over time, my burns will heal,” Lokos told Lion’s Roar in 2014. “The support from the sangha has been phenomenal. I’m very fortunate.” Photo by Donna Svennevik.

In this excerpt from his book Through the Flames, Allan Lokos marvels at the despair, the joy, and the healing process that he and his wife experienced after surviving a horrific airplane crash.

The dictionary tells us that a miracle is a phenomenon that is not explicable by scientific or natural laws, and is therefore often credited to a divine agency. That may or may not be. I, for one, am comfortable simply standing humbly in awe before what is so astonishing. The instant my body was so badly injured, it began to heal. If that is not miraculous, I do not know what is. It brings me to my knees.

Oh, what a beautiful and therapeutic tonic is gratitude. Gratefulness is not the only human experience, however, and like everything else, it is not immutable. Within a couple of days I entered into the most devastating, horribly despondent period of my life. I would not have believed that a basically happy, positive person could feel so miserable and hopeless. The depths of despair seemed limitless and the days endless.

The first morning at home, I stepped onto our scale and learned that I had lost twenty-five pounds. This was undoubtedly the result of two months without real food and exercise, added to the damage done by the severe burns. I was previously in good shape and I was now scrawny and physically weak. For those who might be tempted, let me state clearly that I do not recommend this type of “crash” diet (pun intended). Fortunately, I enjoy food, but gaining back this amount of weight in a healthful manner was not going to happen quickly. It took eight months to gain the first ten pounds and I still have a way to go.

I realized from that first day that my number-one priority, for as long as it took, had to be my healing. More bluntly stated, I had to put me first. It felt like a strange and egocentric view and, I would like to believe, not my usual way of thinking, but the reality was stark and clear. If I did not recover, my life would be miserable and I would be of little use to anyone.

My wife, Susanna, had considerable pain emanating from her broken vertebrae. She should have taken the same approach to her recovery as I did to mine, but my inability to attend to my basic daily needs meant that for the time being, she would be balancing my needs with her own. She was mobile, and other than no lifting or bending, she was able to lead a fairly normal life, albeit hampered by a heavy, restrictive, neck-to-waist brace, which she was to wear nonstop during waking hours.

Of the two of us, I had been the more seriously injured physically, and recovery was going to be challenging on every level—physical, mental, and emotional. I knew this, but I had no idea how formidable the actual journey was going to be. That challenge, the most daunting either of us had ever faced, would weigh heavily on both of us. Throughout the day I would want to lie down, not so much due to fatigue, although that certainly was part of it, but because of what is known as the “freeze mechanism.” There are times when our options are fight, flight, or freeze. There was nothing and no one for me to fight, except myself.

This was no dream, a nightmare perhaps, but not a dream. This was now my life.

There was no place for me to flee and escape. The only remaining option was to freeze, which I did in the form of going to bed often and, I hoped, falling asleep. I did this for about two months, and then I stopped. I did not make a conscious decision to stop. I was just ready to move on.

I did not know at that time how close I had come to death. I was only to learn about that later. So, to be truthful, I was not constantly filled with gratitude. While I would be able in an occasional moment to feel the simple pleasures of life, mostly my days were filled with pain, dread, fear, anxiety, and the constant wish to have my life back. I felt as if I had no life. I thought it, and said it so often, “I want my life back.” It seemed as if there was nothing I could do for myself, and anything I attempted to do resulted in more pain and suffering. My hands were useless. I could not hold a fork or a toothbrush; I could not wash myself, dress myself, or wipe myself. I felt hopeless and life seemed pointless.

I knew from my years of introspective practice, that what I was experiencing were thoughts and feelings, and those thoughts and feelings were powerful, sometimes overwhelmingly so. So many mornings I woke up with the belief/hope that it had all been a dream and I was now back in my real life. Then I would stand up on my unsteady legs or try to use my painful hands and realize that this was no dream, a nightmare perhaps, but not a dream. This was now my life.

One day, in a moment of deep despair, Susanna, who was going through the same kind of experience as I, said, “Now I can see that there are things worse than death. My beautiful life is gone. This life is horrible. It would have been better if we had died in the crash.” I understood how she felt although I never quite reached the point of wishing I had died.

This was the most depressing, heartbreaking period of my life. There seemed to be no way out of the gloom. Perhaps that was the worst of it, the feeling that there was no way out. In the past, when there were difficult times, I was always able to find a solution. This was different. I had been seriously injured, and I was living with the consequences. I felt weak and broken. My vision, usually spacious and optimistic, had been narrowed and I could not see a broader picture. Susanna and I were living with physical pain and the suffering of witnessing each other’s pain. She was hurting and devastated, and during this time I rarely found a way to help either of us. Often, at the end of a day, the best I could offer was, “Well, we made it through another day.” It did not feel particularly positive, but in certain circumstances, survival is a triumph.

Like all phenomena, feelings that arise fade away. Thankfully, for the sake of our equanimity, we could acknowledge that we were extraordinarily fortunate. It seemed odd to have been so unfortunate, yet, at the same time, so fortunate. It was miraculous that I was alive, and that Susanna could walk. A split second, or a centimeter one way or another, could have yielded a disastrous result. Our doctors told us that the possibility of recovery, though far off in the distance, was real, and that did make a monumental difference.

Since the accident I have focused primarily, but not exclusively, on my recovery. One special exception was the morning of April 14, when I returned to teach at the Community Meditation Center, the spiritual home I had founded in 2008. At the suggestion of several CMC board members, I entered the building through a side door so that people would not “be all over me.” When I was introduced, I walked smoothly and briskly to the front of the room, leaped (with a prayer) up onto the platform, and was greeted by the huge crowd with a standing, cheering, and tearing ovation. The more they cheered, the more I teared. It was an indescribable moment.

We admire survivors. We need survivors and those who have overcome the odds. The greater the odds they have overcome, the more we want to see them, to touch them, to hear their stories. We need to know it can be done. That is what I was that day and ever since. I had done it. I had survived.