Are we all alone in this world or at one with everything? Nick Walser shines a spotlight on the paradoxical nature of loneliness. 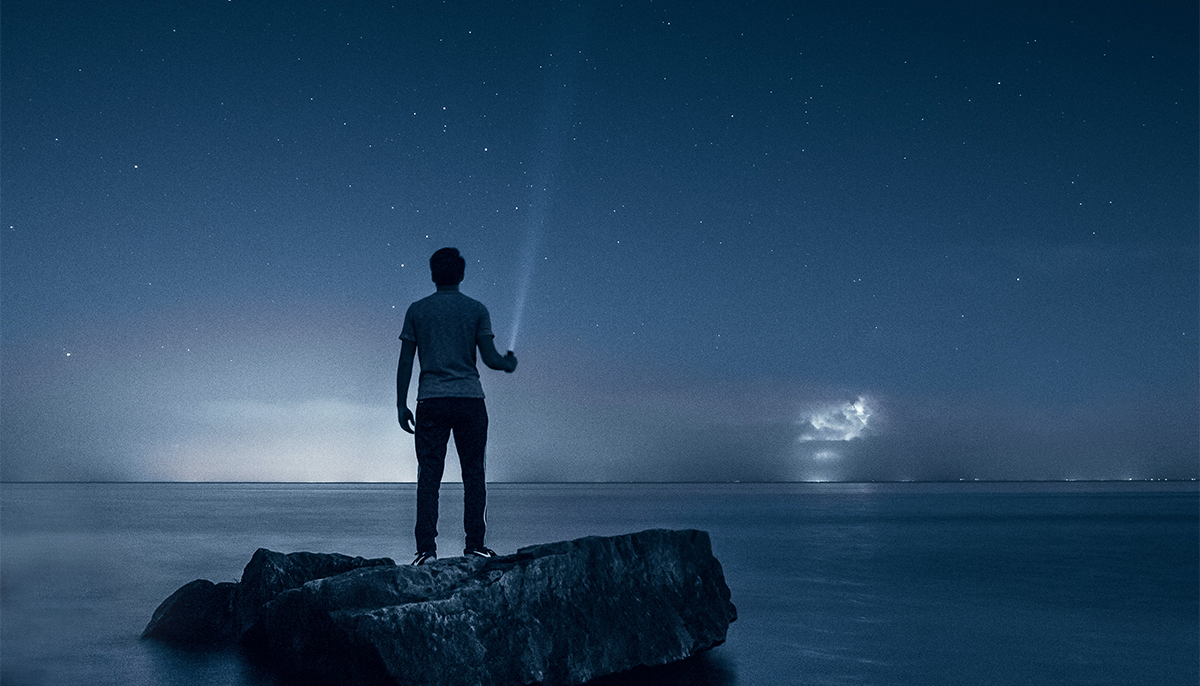 Is Buddhism’s bottom line the oft-quoted “Be a lamp unto yourselves?” This may be a lovely, liberating thought when we are casting off reliance upon external authority. But sometimes being our own illumination can feel lonely indeed.

I have felt most lonely when I have weighed the very smallest idea of myself against the vast grandeur of the universe, and found myself wanting. On many occasions, I haven’t put the time into connecting wholeheartedly with others; I have held myself aloof from life.

It’s easy to do this. Our culture can sometimes give us the impression that we are contained little blobs of stuff, and that within our carefully maintained home environment our needs will be totally satisfied. All our necessities are to be found within our respective four walls. We can have food delivered and films downloaded, and work can be done from home. Our home becomes some sort of delivery-unit, and we become mere open mouths, gobbling up whatever comes our way. Then it becomes easy to convince ourselves that we are singular indeed: self-sufficient and able to fulfill our every whim, because all roads seem to lead to us, and there is nothing like this kind of one-way traffic for reinforcing a strong idea of self. We also have the notion that we need never be alone because of mobile phones, social media and so on. But this kind of togetherness is characterized by a lack of depth, and often by the interventions of corporate bodies keen to sell us their wares. In both states of alone and together, money-making technology inserts itself, adding to our convenience and taking away from our experience. Is interactivity replacing relationship?

So some may suggest the sangha as an antidote to loneliness, but it’s easy to feel lost amidst the dharma busyness that goes on.

Even if we have a wonderful teacher, the teacher has their own life to live. Even if we are part of a supportive sangha those people won’t be present always, and we always have work to do that no one can do for us. The Buddha’s original sangha didn’t apparently spend all their time together, but convened only during the rainy season. The rest of the time they went off according to their own lights, mixing with their own communities who had little or no knowledge of Buddha’s teachings.

So some may suggest the sangha as an antidote to loneliness, but it’s easy to feel lost amidst the dharma busyness that goes on. What we find is that even when we are in relationship with people, loneliness still can be present. Loneliness isn’t always about being alone, but rather about feeling out of step with others.

There is a Zen story, where monk Ken complains to his senior Genjoza after they have been traveling together for some time: “I’ve been practicing for years, and still have nothing. Roaming in the country like this, I’ll never attain enlightenment.” Genjoza answers thus: “I will take care of you on this trip. But there are five things I cannot do for you. I can’t wear your clothes for you, I cannot shit for you, nor can I piss for you. I can’t carry your body around, and I cannot live your life for you.”

On the one hand, this idea of ultimate responsibility for ourselves induces in us a kind of vertiginous loneliness. At the same time, it can instil a sense of “I will do my practice and attain awakening for myself.” I think a lot of loneliness bears down upon us if this is how we approach the dharma, and I would hazard that most of us go through a stage like this. Again, all roads lead to our self and make it concrete, limited and dependent on outward circumstances. Loneliness seems to thrive where the self hardens, and where we suffer is where we are clinging.

When I feel lonely, it’s because I have pictures of myself being more loved than I am, more surrounded by close friends than I am, or having a lover who gets me more absolutely. But these are exactly just pictures and projections. I am looking for praise and reassurance, kind words, and looks of admiration.  But all the time I am chasing after these, I am expecting others to live my life for me. I am basing my happiness on outer circumstances, and in doing so forgetting the thousands of unsung connections and hands of support that this universe deals me every day.

There was a time when I wanted my practice to be super-charged; I wanted to do it, to get awakened, to become a Buddha in the same way that monk Ken wanted to. It was about my efforts, and how I measured up. I was casting around for teachers or practices that would get things moving faster. I admired the lone-wolf characters from Zen history like Layman Pang or Ikkyu. I was using my practice to separate myself from others.

If you have any experience of practice, then you’ll know what I eventually experienced. I was disappointed. At the same time, because the cosmos is kind indeed, I had a clear realization: the more self-obsessed we get, the more we actually rely upon others to live our lives for us. So much for the lone wolf.

If someone says “I’m having trouble with my wife,” then a certain sort of person might be given to say “All is impermanence” and leave it at that. But that isn’t the human response.

How about “oneness?” I’ve always admired the fact that most Buddhists don’t get too mystical about it. When the Dalai Lama didn’t laugh at the Australian presenter’s “One with Everything” pizza joke, I liked that. It’s all too easy to order one with everything, and many people will deliver it for you. More difficult is to live through particularities. If someone says “I’m having trouble with my wife,” then a certain sort of person might be given to say “All is impermanence” and leave it at that. But that isn’t the human response. In Zen, when faced with personal dilemmas, some people get stuck in old koan responses like “Go drink tea” or “Chop wood, carry water” as if to say “human concerns are trivial” or “ worries are pointless.” I certainly went through a stage of feeling like I was transcending all the human nonsense. But actually I was just being aloof, and I wasn’t connecting with things. One with everything is not an antidote to loneliness.

Neither alone, nor together, it is possible to respect our place in the universe, as an expression of that universe. This means living through particulars. Differences are sacred. This is responsibility. It means connecting, and being human. Whilst respecting the particulars, we can then blow up the self and make it as huge as possible, and this means intimacy with all things, including loneliness. Sameness is sacred.

The wonderful and fortunate thing about life is that often, even when we are being complete fools, we still get to see some wisdom. In the midst of my lone-samurai heroics where contrarily I was seeking outside myself for some sort of awakening, this thought occurred to me with some force: no teacher or teaching was ever going to “do it” for me. I was the doing already; there was not some separate self to whom dharma would dramatically happen, like lightning striking a rod. But all the time I was making a strong practice-self, and wielding the dharma like any other mask I had constructed, I couldn’t see this. So I made real loneliness for myself.

This brings to mind Dogen’s encounter with an old monk, of whom he asks: “Old man, why are you working so hard at these menial tasks? Wouldn’t it be better to be sitting zazen or doing koans?” To which the canny senior citizen replies “Who else can do this work? I am not others and others are not me. You know nothing.”

There’s no one else to do it, and yet at the same time, there’s no-one there to do it. Not alone, and not together.