You may be lonely, but you’re not as alone as you think. Sometimes, says Jane McLaughlin-Dobisz, you have to put your phone down and stop to taste the cookie dough. 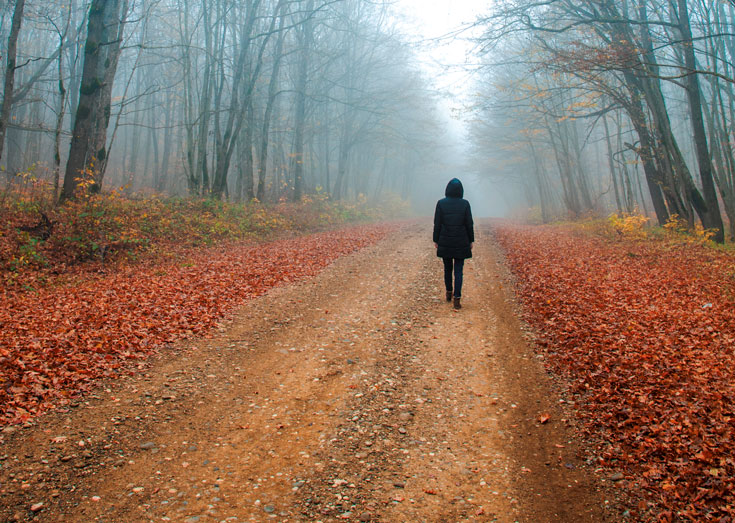 A long time ago in Korea, a student asked Zen master Man Gong, “What is the most important and precious of the three jewels? Is it the Buddha, the dharma, or the sangha?” Without hesitation, Man Gong answered, “Sangha.” When I first heard Man Gong’s answer, I was surprised. The way I saw it, without the Buddha there’d be no dharma, and without the dharma, there’d be no teaching at all.

After some years of meditation, I now see that Man Gong was pointing to our practice. We’re all in this together. We’re part of each other, for each other, and all made from the same cosmic cookie dough. The moon and stars, all animals, flowers, and trees are the sangha. The ground, air, sun, and water are the sangha. All beings and all things are included.

The moon and stars, all animals, flowers, and trees are the sangha.

Another great Zen master, Thich Nhat Hanh, spoke about our interconnectedness in this way: “In the paper, there is a cloud.” At first, one may wonder what in the world that means. There’s no cloud in the paper! But with this profound teaching, Thich Nhat Hahn is inviting us to see the whole picture: the paper is made up of many non-paper elements. Without the cloud, there’s no rain. Without the rain, there’s no tree. Without the tree, there’s no paper. Everything in this world is interdependent.

A third teaching pointing directly to sangha is from Shakyamuni Buddha. Once, at Vulture Peak, many followers were assembled, waiting for him to speak, but the Buddha sat silently for several minutes. Finally, wordlessly, he held up a flower. Only his disciple Mahakashapa smiled. In that moment, Mahakashapa perceived that the whole entire world is contained in that single flower. He smiled because he recognized our common, universal substance.

If we’re so wholly connected, why is there so much loneliness and alienation in our modern world? This sense of separateness comes from feeling disconnected from the community of all beings, and in a more concrete way, from our local communities, families, friends, and our own selves. Sometimes this lonely feeling comes from living in a new country or state. It can come from having been abandoned—whether due to the death of a loved one, being left as an elderly person in a nursing home, or being bullied or ostracized from the “in” group as a teenager.

Sometimes loneliness is simply a state of mind: “No one likes me” or “I’m not good enough” or “No one understands me” or “I’m all alone in this.” My teacher, Zen master Seung Sahn, used to call this state of mind “not-enough mind.” He’d say, “If your mind is complete, the sun, the moon, the stars… everything is complete. If your mind is not complete, then the sun, the moon, the stars are not enough. You will feel as though there is something missing.”

That’s how it is for a lot of folks nowadays—it’s become somewhat of a global epidemic. There are commissions on loneliness and campaigns to end loneliness. In the United Kingdom there’s even a Minister for Loneliness. According to some articles, loneliness affects young people more than the elderly. Others say just the opposite. Some studies claim one out of every two people surveyed are lonely. Others say it’s one in three. Research is being done by Harvard, Cigna, The Wall Street Journal, The New York Times, AARP, CBS, the BBC, USA Today, and so many others. It would seem that being lonely is somehow a by-product of our modern industrialized society, perhaps related to our use of social media, perhaps a result of living longer or of no longer living in extended families or tribes.

Not only does loneliness affect our mental health and well-being due to its associated raised levels of stress hormones and inflammation, it’s also correlated with physical issues too, such as heart problems, dementia, depression, diabetes, and suicide.

Here’s the thing; loneliness is a huge societal issue. In our modern world, as wealth grows and lifespans increase, so too does our isolation. The more connected we become with our phones, computers, and virtual relationships, the less we look each other in the eye or have actual conversations. We represent ourselves on social media almost as a self-marketing strategy, posting only the most positive and stylish aspects of ourselves. This creates a new kind of loneliness, particularly for those viewing others’ seemingly perfect lives while perhaps making comparisons to something not quite so perfect in their own lives. Somehow in all of this, we’ve completely forgotten our interdependence and how much we need each other not only to be happy but also just to survive.

We can look at this issue and ask ourselves the obvious question: “How does practicing meditation get to the root of loneliness, as well as to the root of all the other feelings we experience?”

Sometimes, in order to become comfortable with the thing you’re most afraid of, such as being alone or lonely, you have to go straight into it, facing it head on rather than running away from it. While it may seem counterintuitive to cut oneself off from the world in order to find true connection to it, Buddhism has us do exactly that. Whether it’s on the cushion for half an hour or on a longer retreat, we remove ourselves from external distractions and let the opinions, conditioning, and expectations of our habitual minds settle down.

Our minds are like glasses of murky, muddy water, making it hard to see, hear, and perceive clearly. Practicing is simply the act of putting that glass of muddy water down. When we stop shaking it up, the mud slowly sinks to the bottom of the glass. By allowing the mud to settle, the water clears. It’s the same process when we practice meditation. Our thoughts settle down, and our minds clear. With this clear mind, we can be just where we are, with things just as they are. We return to the breath that connects us to life. We become still enough to hear the sound of the wind, feel our bodies touching the earth, and become aware of the thoughts and feelings that come and go. When we pay attention in this way, inside and outside become one. We can finally taste for ourselves that cosmic cookie dough of which we’re all made and feel ourselves part of and connected to the entire universe. From this place we have a chance to experience what the Buddha taught when he said,  “All things are created by the mind alone.” And that, of course, includes loneliness.

Those of us who are privileged enough to come across this teaching have our work cut out for us—to digest the depths of its meaning and to pass it on to anyone we can. This “pass it on” mindset is itself what connects us back to each other.

In order to stay alive, we need the sky, earth, oceans, and rivers, and now they need us too.

Over the last decades, I’ve been blessed with many opportunities to practice meditation on solo retreats. In such solitude, we can appreciate “small” things, like the pleasure of tasting rice, the sound of a creaking pine branch, or the smell of the fire at dusk. On a solo retreat, even though we may be physically alone, miles from anyone, we may feel more at peace than ever before. In the spaciousness of that solitude, many kinds of mind appear and disappear: bored mind, sleepy mind, afraid, jealous, doubting, angry, desiring, hungry, loving, trying mind. Beginner’s mind. There are certainly some times of feeling lonely too, but solitude’s grace allows loneliness to come and go, without pushing it away or clinging to it. We realize no one is in any of it. “Nobody home,” as it were.

“Nobody home” means that no matter how much you reduce yourself down to the cellular level—the electrons, the quarks, whatever the smallest part is that you can reference—it’s moving and changing. There’s no constant “self” that’s experiencing any of this. As basic as this notion may be, it’s the ever-elusive essence of the Buddhist path. This is the point we keep coming back to over and over. Why does it require so much time and energy? Because our habit of approaching the world from “my” point of view is so deeply embedded in us that it’s difficult to remember that my is just smoke and mirrors. In this context, loneliness, like all the other emotions that come and go, is no problem.

On the other hand, loneliness, when not experienced in this rarefied retreat atmosphere, or you could say “loneliness left untreated,” is altogether a different thing. It’s a destructive state that changes our brain chemistry and even its formation. Think of the millions of abandoned children left to languish in orphanages around the world, with no loving, protective relationships. Their loneliness isn’t just an existential loneliness, it’s a day-to-day reality of knowing there’s not one soul out there who has their back. Not everyone has the luxury, the free time, or the life situation that allows them to pursue a meditation practice.

So how do we put this all together? What role does Buddhism have in this larger setting of global connectedness and well-being?

In my Korean Zen tradition, we wake up early every morning and before doing 108 bows we recite the four great vows together. The first of these four vows, “Sentient beings are numberless, we vow to save them all,” takes us back to Man Gong’s point that the sangha is the most precious of the three jewels. We numberless sentient beings all need each other. Not only us humans, but also the paper needs the cloud and the flower needs the bee. In order to stay alive, we need the sky, earth, oceans, and rivers, and now they need us too, more than ever.

The second vow is, “Delusions are endless. We vow to cut through them all.” Practicing helps us get to the root of that biggest delusion of all, the sense of a separate “I.” Once we make “I,” we make “not I,” and this is where all manner of opposites begins. Without a separate “I,” there’s no such thing as loneliness.

The third vow says, “The teachings are infinite, we vow to learn them all.” Though it’s not possible, we set our minds on all the various teachings of wisdom, love, and compassion. We try to learn about truth, forgiveness, and clarity. We learn from our elders, from each other, books, and life itself. There’s no end to the lessons, yet we vow to learn them all anyway. This means learning never stops.

Finally, the fourth vow says, “The Buddha way is inconceivable. We vow to attain it.” The Buddha way brings it all together and represents our path. If you live your life with these four vows in mind, you may be lonely once in a while, but you’ll know exactly what to do with loneliness when it appears.

Jane McLaughlin-Dobisz is the guiding teacher of the Cambridge Zen Center and the author of  One Hundred Days of Solitude: Losing Myself and Finding Grace on a Zen Retreat.