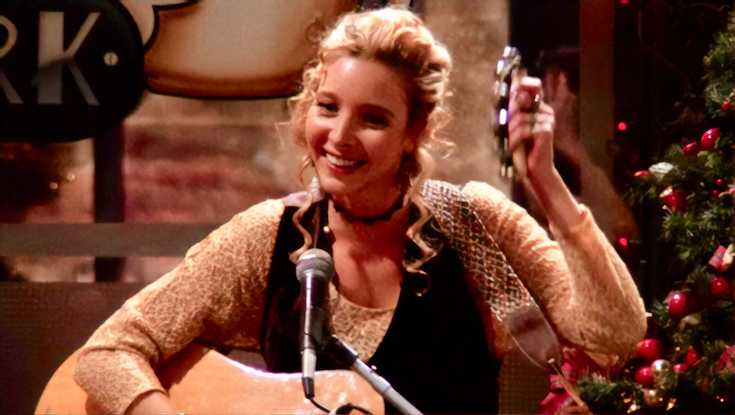 As Jennifer Aniston “breaks the Internet” by joining Instagram and getting 1.4 million followers in the first five hours, causing the site to crash, and as millions of fans around the world celebrate the 25th Anniversary of the television series Friends this fall, there’s one thing worth noting.

I, like many other Buddhists, did not like the show. To us, it was a rolling mental health crisis — neuroses squared. Perhaps that was the intent.

As a group, the “friends” are siloed city apartment dwellers who don’t travel or relate to anything outside their area, and seem to have little or no social conscience or charitable ambitions and aspirations. They are often petty and immature, have little or no health consciousness or environmental concerns, and don’t seem very creative or talented.

They are rarely if ever “in the moment.” (And Joey doesn’t share food!)

The exception is the loving-kindness-filled Phoebe. Phoebe, though cast as the group’s airhead, is free and unedited, spontaneous and delightful. Goodhearted. Perhaps the best “Buddhist” term that might apply to her is the famous and controversial “crazy wisdom” that the Buddhist pioneer Chogyam Trungpa Rinpoche coined in the ‘70s.

We are forever indebted to Phoebe for the terrible “Smelly Cat” song.

Phoebe has what Tara Wagner of “The Daily Positive” calls “radical honesty.” When faced with a direct, challenging question, she would never sugarcoat her answer to avoid making the other person uncomfortable. Instead of taking responsibility for their emotions and reactions, she was radically honest, with the philosophy that the truth will set you free — even if it pissed her friends off first. (“Your collective dating record reads like a who’s who of human crap.”)  Who hasn’t wished they could say that to someone they care about to save them further travail?

And she clearly had great karma.  In “The One With the Thumb,” when Phoebe’s bank gave her $500 and a clock radio by mistake, Phoebe tried to give it back. When the bank refused, she gave the money and the clock to a homeless woman. The woman bought Phoebe a can of soda as thanks. The soda contained a severed thumb, and the soda company gave Phoebe $7,000 in compensation. Talk about “what goes around, comes around.”

It’s hard to quantify karma, but the general principle of sowing what you reap applies. Who the “you” is and in what decade or lifetime is part of the mysterious equation. When I was living in a Tibetan cloister in France in the ‘80s, a friend of mine was over-credited 2,000 Francs by her bank. She asked the head lama what to do, and he said, “Keep it unless they ask for it back. Use it generously for good deeds. You must’ve done something to receive this little boon.” And so with Phoebe.

Perhaps this boon was in return for the loving-kindness she showed by acting as surrogate mother for her half-brother and his wife’s triplets, or for the great care she gives to animals. One of the most relatable things about Phoebe is her passion for animals. She is not only a vegetarian, but she’s also against fur — unless it’s a family heirloom, of course. And we are forever indebted to Phoebe for the terrible “Smelly Cat” song.

As to the other stuff, Phoebe clearly had some major Buddhist beliefs. In “The One With The Cat,” Phoebe found a cat she believed was the reincarnation of her mom. Reincarnation is not only a major tenet of Buddhism, but of Hinduism and many New Age spiritualities. It was nice to get a shout out to all of these traditions (even if the writers meant it jokingly).

I confess. I’m talking kind of tongue in cheek. For the most part, Buddhists don’t find Friends to be too objectionable. I just hope that if they ever do a reunion show, we will find that they have, like Lin-Manuel advised in a recent tweet, “looked up and decided they wanted more.”

Gmorning
In your routine
Look up and notice one detail
You never noticed before
-The flag on that fire escape
-The subway conductor’s smile
-Your neighbor’s headphones
-The speed of the clouds today
(Okay I gave you four.)
Be present for just a second: you’ll want more.

Lama Surya Das is the best-selling author of Awakening the Buddha Within and a leading voice in Western Buddhism. The founder of the Dzogchen Center in Cambridge, Mass., his latest book is a children’s book called The Yeti and the Jolly Lama. Tibet's Dalai Lama calls him "the Western Lama."