Reflecting on the second anniversary of the police murder of George Floyd, Buddhist practitioner and beekeeper Marcella Prokop shares her account of working with the stickiness of suffering, and what the bees have taught her along the way. 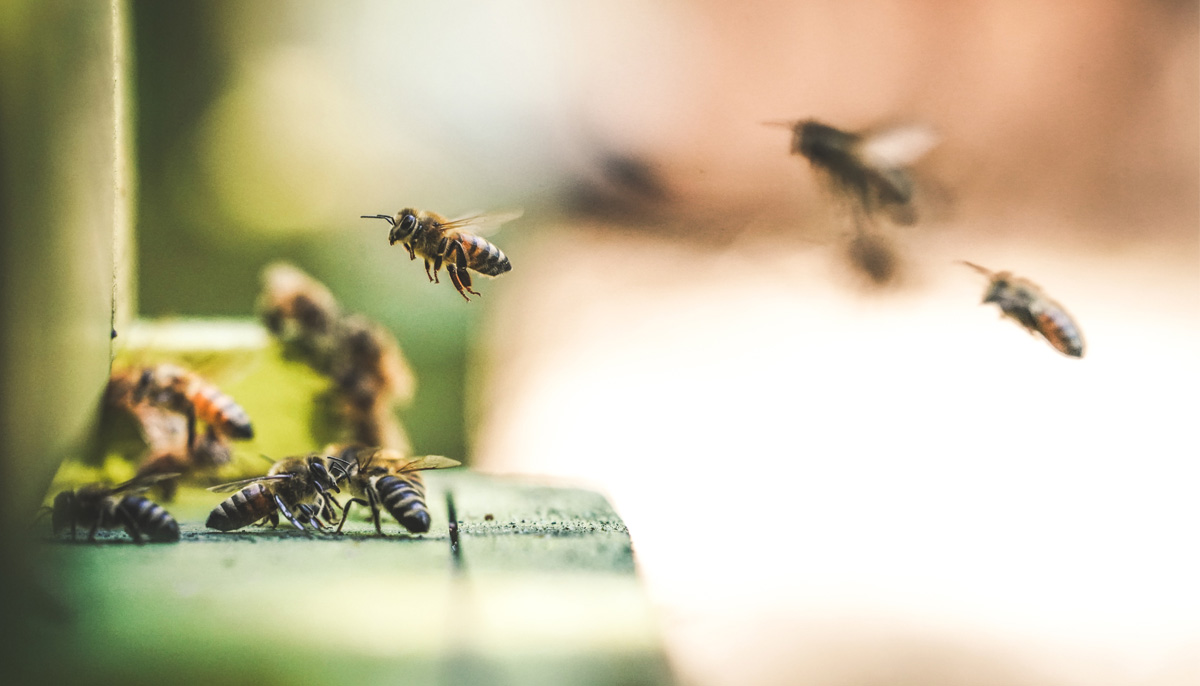 One late June afternoon in 2020, my two-year-old called out a question in his sing-song voice:

“Momma, what is happening?”

I looked up from my spot in the green bean patch and saw a shimmering cloud sparkling in the sky. It was a colony of honeybees, swarming above us. I’d never seen a swarm take shape, and even though it meant a loss for my apiary, there was something powerful about watching the thunderhead come together.

As I watched so much anguish around me, it seemed dismissive to say to myself, ‘All life is suffering, but this too shall pass.’

As I swooped my toddler into my arms and ran to the house, I explained what I thought the bees might be doing, knowing, as I did with all the questions of the year, I didn’t have a complete answer.

On the day my bees swarmed, twelve years after I first came to the Buddhism, I was caught up in the misery of having no good answers for anything. I was questioning how to breathe and be in my body. I rarely sat in practice, overwhelmed by work and motherhood and lingering postpartum depression. When my Buddhist mentors told me “Your son is your greatest teacher right now,” I couldn’t hear them.

Compounding my personal woes, COVID-19 had been decimating the world’s most vulnerable populations. And along with COVID deaths, all spring, the world had witnessed multiple murders of Black people: On February 23, white supremacists chased and killed Ahmaud Arbery in Georgia. On March 13, police fatally shot Breonna Taylor in her home in Kentucky. Then, on May 25, four hours from my farm in Minnesota, police murdered George Floyd in Minneapolis. As I learned of each assault, the question that came up was the same one my son would ask in June: What is happening?

As a Latina, I knew brown and Black bodies are always disproportionately impacted by scourges and systems, but for the first time I became aware of the magnitude of my privilege. I hadn’t lost my father or husband or son to illness in a meat-packing plant, like so many other Latinx people. I hadn’t received news that my child or parent had died at the hands of another human. I wanted to take refuge in The Four Noble Truths, but as I watched so much anguish around me, it seemed dismissive to say to myself, “All life is suffering, but this too shall pass.”

When would it pass?

When I came to Buddhism and the practice of Vipassana in my 20s, I was recovering emotionally from a stroke and backpacking through Thailand. At that time, I learned insight meditation uses the sensations of the body to cut away the clutter of the world. By observing what is happening, acknowledging it, and letting it drift away with the breath, the practitioner experiences the reality of the moment — and the power of The Truths as I came to understand them:

I had struggled with bodily perception as a light-skinned Colombian growing up in rural Nebraska, and the sense of who I was post-stroke further fractured this duality. Learning that I was creating my own suffering through a desire for “the way things used to be” or dreaming of a future when I’d feel “whole” helped me come into my body in more ways than one. Watching my breath and acknowledging sensation was a challenge, but this work gave me a tool for mindfully viewing my lived experience and desire. For me, Buddhist practice became a process of investigating and asking questions about my observations to get to the truest truth: All we have is this moment, and the sting of suffering or salve of joy are as fleeting and impermanent as the body. Through this practice, I attempted (sometimes successfully) to live in equanimity as I rode the ebb and flow of life’s ups and downs.

But in the summer of 2020, I could not find peace in meditation, or this knowledge. I could not say to myself, “This too, shall pass,” about anything. As other brown and Black bodies experienced incredible trauma all around me, I was caught up in feelings of helplessness and anger. And I could not find the space to question how much of my situation was clouded by my desire for change.

Honeybee colonies, unlike most modern human societies, are completely eusocial. Bees work together, caring for larvae and maintaining hygiene in the brood box while young, and then foraging and defending the hive as they get older. Although this communal nature exists, bees will swarm and leave their queen, or kill her. In either instance, her daughters rear a new leader. Bees do all this for the good of the hive, an inherent desire to sustain life compelling them to fulfill responsibilities at every age so the ecosystem can thrive.

I became a beekeeper because these beings and their systems intrigued me, and over the years, beekeeping has become another meditative practice. Every sting is its own pop of enlightenment stitching me to the moment. In 2020, I knew bees don’t swarm because they are angry or because they want freedom — they swarm because conditions are poor or they need more space. But the human brain is contradictory, and I sought answers in both the metaphors of swarms and space and systemic failure, and the logic of other humans.

“Were my bees angry?” I asked my beekeeping mentor. “Did that influence the decision to swarm? What do I do now?” “Sometimes it just happens,” was his equanimous reply.

Other beekeepers told me it had to be the weather, or a dearth of pollen. Someone said there was just something in the air. It was hard to sit with the uncertainty because I wanted answers to my questions. But observation and acceptance were what I got.

On the day my colony lifted up and drifted away, the bees weren’t swarming out of anger or fear. They were just moving, instinctively transitioning because it was what they perceived as necessary for their survival. Every spring since then, I have welcomed new colonies of bees to my farm.  I’ve begun to recognize the intersections of being a beekeeper, being a human and being attuned to injustice are cyclical experiences. Bees come and bees go. Thoughts arise and thoughts fall. My heart aches for others and slowly heals. Part of Buddhist practice is recognizing humanity within ourselves and others, watching conflict swell and spill, and letting it go. To begin anew each day, I strive for this acceptance of what is, logically and metaphorically.

Paired with this acceptance is the fact that we are experiencing a period of great loss societally. It is important that we acknowledge the losses and injustices enacted on communities of color. But we must also recognize the power that is coalescing, and appreciate it without desiring something else of it.

With The Four Noble Truths as a guide, we can understand that freedom isn’t confined to physical relationship. Freedom comes when we can discipline the mind enough to let go of any craving created by it. It is this detachment that moves us from asking when and allows us to say in this moment.

It’s been two years since George Floyd was murdered, and although the legal process has delivered procedural justice, for many, there still exists a longing for the righting of past wrongs. There also is a desire for an equitable future and a greater communal commitment to doing more. As I prepare for a new season of beekeeping, and a new season of reflection on where we are, collectively, since Mr. Floyd’s death, I know my human desires for closure and justice and comfort will keep me bound up in the stickiness of suffering, if I let them. If, instead, I can view equanimity as one part of the path to equity, perhaps I can continue to ask, “What is happening?” in a way that frees me enough to let my attachments drift off and splinter like bees seeking a new home.

Marcella Prokop (she/her) began her study of meditation and Buddhism in 2008. As a Colombian-American writer and educator, she is passionate about helping students find their voice, and she has been working to advance access to higher education for BIPOC communities for more than a decade. Marcella seeks to be a student of those she serves and has found that years of creative training and mindfulness practice support all parts of her being.