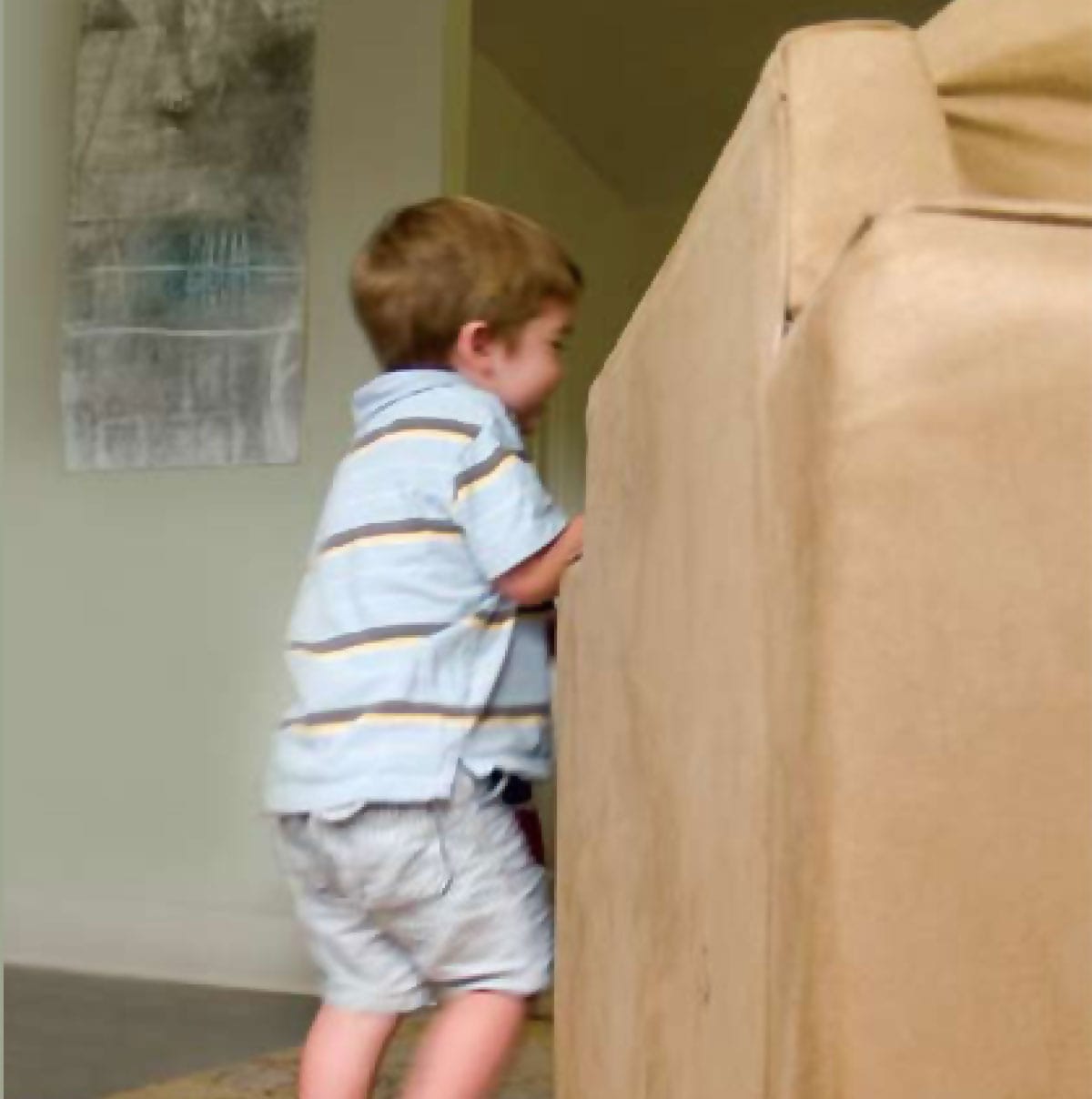 “No, Mama, no! I going draw on the couch!” When “Burmese Lessons” author Karen Connelly loses her cool in a battle of wills with her three-year-old, she learns valuable lessons about mindful parenting.

“Timo, will you please give that to me?”

Timo, a three-year-old master of the universe, stands on the other side of the sofa, an open challenge animating his small face. His dark eyes sparkle with pleasure. From his point of view this is a game we’ve played many times before, chasing each other around the sofa. Naturally, he knows that he has something he’s not supposed to have, something that I want, but that only adds to the excitement. Like many parents, I’m often distracted as I engage with my child; the phone needs to be answered, the rice on the floor needs to be cleaned up, this one newspaper article has grabbed my attention—just this one, please, just a minute, just a minute!—as he stands beside me at the table or crawls on my lap or shouts for me to come now and I pretend to engage with him while simultaneously ignoring him. He always knows when I am ignoring him.

Ha! Now he knows I am genuinely involved. No wonder he’s thrilled.

I’ve followed him from the kitchen to the living room, a distance of twenty feet. We are just steps apart now, but I don’t want to make another wrong move. His left hand is outstretched, like a runner about to sprint; his right hand clutches an extra-thick permanent black marker, which is poised above the tawny back of the sofa.

This is a moment for practical as well as philosophical parenting concerns. Why is that leather sofa dark yellow? What were we thinking when we bought it? Why was that permanent marker left in the kitchen drawer, among the washable kiddie felts and crayons? Why must I care so much?

Because Timo has wrecked the CD player, dug up the houseplants with his bulldozer, and ruined every lipstick I own. He searches out the lipsticks, crawls up bathroom shelves, hunts for them in my overnight bag, ferrets them out no matter where he goes. After drawing all over his face, the walls, the stairs, or, most recently, the bedspread, he smushes them to a pulp.

“Timo!” Unconsciously, I have raised and sharpened my voice. The effect of my harsh tone is instantaneous. The game look on my son’s face hardens into anger. It’s always like this. He gives me back the emotion I have just sent out to him. My reactions set the tone of the conflict that is to come; I am the adult, after all. Drive all blames into oneself, says one version of the lojong slogan for mind-training, which isn’t a recipe for more mother-guilt but an admonishment to examine the nature of power and responsibility. I have power over my child. Yet I so easily misuse it. I do the precise opposite of that other Buddhist meditation practice, tonglen. Instead of sending out calm breath, I shoot a javelin from my mouth. We love each other, this boy and I, out of necessity, so that javelin always finds its mark.

He responds, equally sharply, “No, Mama, no! I going draw on the couch!”

“Please don’t do that Timo, or Mama will be very…” What will I be? I want to say angry, a word he knows well. And I will be angry. But beneath the anger is usually a feeling of disappointment, even defeat, especially when the disagreement turns into a protracted battle. The threats may turn into reality—he will be hauled up to his room, have his toy taken away, or not go for the walk at all—but the tears come and the mood is unhappy for both of us. Don’t bring things to a painful point suggests another lojong slogan. I am increasingly conscious of the times when I could have done it differently, and arrived at a happier outcome.

It’s true that day-to-day parenting is full of snap decisions; sometimes we’re in a hurry. Modern life requires an adherence to schedules, a tremendous degree of organization. Because my husband and I are self-employed, we are much freer with our time than many others, but we still need to manage busy timetables and juggle responsibilities. Children have to learn about that, with parents who encourage their participation but also train them in the difficult quality of patience. The big choices rarely involve children at all, at least not while they are small; the parents decide where to live, what to eat, what school the child will attend, when to go to the doctor, what morality to instill. What example to set.

All our lives, we learn about being human by watching what other people do, but during childhood, it is our first and deepest form of education. Children want to do what their caregivers do; they want to be like us. Very little escapes their sensibilities. Our actions pass through them like electrical impulses, subtly or overtly influencing their behavior, flavoring their essence. In everyday conflicts with my child, I know that slowing down will add lightness to the air, a moment of breath for both of us. This black-haired boy resembles me in so many ways; he has the same quick temper, the same readiness to laugh. When I remember to play more, even through my anger, he responds in kind. But I often forget to play. I tighten up, clamp down. I want my will to be done, like the old Christian God, I, too, want to be a master of the universe, and of my child. But I am not. And he knows it.

We all know it. None of us can rightly cling to the arrogant notion of our dominion over the earth, not with the plethora of intractable wars, abusive governments, environmental and economic crises, injustices committed with impunity even in democratic countries. The only hope for our complex, fragile world is human consensus and negotiation, forms of dialogue that continue to be unpopular because they are unwieldy, time consuming, and often dull. I know, because I try to employ them on a regular basis with my kid, and often we don’t get to the end of the conversation. I just pull a dictatorship on him, throw him over my shoulder, and let him scream.

But he’s getting too big and too smart for me to do that anymore, and I am too aware of how my tyrannical methods are doomed to failure because they poison our little society with bad feelings. When arguments escalate, especially around dinnertime, Timo will refuse to sit or eat; then my husband and I will fight over the right way to socialize a three-year-old while the meal gets cold and we lose our appetites.

Viewed from a distance, these moments can be funny, and instructive, but when I’m in the moment, anger holds me in a vise grip. Other negative emotions are there, too, but anger is the heaviest. It keeps me from moving freely; it keeps my mind from loosening up enough to understand that the boy likes it when we are utterly focused on him. It’s what he craves. We’ve usually been away from him all day; dinnertime is a perfect opportunity for him to arrange his starring role in a big drama. If we take fifteen minutes to play and chat with him before one of us disappears into dinner-making mode, he is usually ready to come and sit down with us again by the time the food is ready to eat.

Even though I understand this mechanism, I forget it. My anger fills the space quickly, like a brushfire, igniting whatever it touches. Anger is an important emotion; it can be the flame that wakes us to injustice and the need to speak out, inspiring us to be brave. But when I’m angry at my young child, I am usually stuck in old patterns of reaction, which is a form of laziness. In Thailand, where I’ve lived and meditated in the Theravada Buddhist tradition, the expression for quick-tempered anger is jai-raan (hot heart). Likewise, when someone tells you to calm down, they say Jai yen-yen (cool your heart).

Jai yen-yen. Like most wise advice, it’s hard to implement in the heat of the moment. “Angry! I will be really mad, Timo, if you draw on the couch! So give me the marker!” With that, I lunge over the cushions and try to grab the felt pen out of his hand. But with reflexes quicker than mine, he easily eludes me and hops into a run, clearing the corner of the sofa and dashing back into the dining room. Where there are white walls all around (albeit much finger-printed).

He stands beside the antique blue china cabinet, holding up the black marker like a knife. His face teeters between a frown and a laugh. “Come on, Timo. Please don’t draw on the cabinet. Mama will be very sad. Let’s get your markers out. We’ll draw something together.” With that, I turn my back on him and go into the kitchen, where I noisily rummage through the kiddie drawer, praying he will follow my lead.

Beside the kiddie drawer is a glassed-in shelf lined with bottles of liquor and wine. What will happen when my spectacularly willful and charming child is fifteen, curious about alcohol and drugs, surrounded by other teenagers who have never heard stories about the Dalai Lama and the importance of loving-kindness? It’s just a black marker now, a stain on the furniture, a line on the wall, but who will he become when his own peers make him furious, or when a girl doesn’t want to have sex with him?

I don’t know who he will become. I only know who is he now. Pure in impulse, pure in power, perfectly honest in his response to the world and to me. I am still so much of his world. That will change swiftly—is already changing.

“Mama, are you sad?” He sidles around the edge of the fridge, with the marker flush against his chest. He’s wearing his favorite Thomas the Tank Engine shirt; a black stain, already two inches wide, spreads like blood below his sternum.

Another lojong slogan: Abandon all hope of fruition. “I am a little sad.”

“Why are you sad?” His voice is like a flute, high and silver, bright with concern.

“Because I don’t like it when you don’t listen to me. And because your shirt is all dirty now. Lift up the marker.”

He holds it away from himself and awkwardly peers down at his chest. I expect him to burst into tears but he smiles. “Look, Mama! What a mess!” He does a spontaneous little jig of delight and offers me the marker, which I take quickly, lest he change his mind. “Thank you, Timo.” He pulls the shirt away from his skin so he can see the damage better, and laughs.