For times troubled with everything from Wall Street meltdowns to very inconvenient truths, Alice Walker gives us her recipe for finding equanimity. 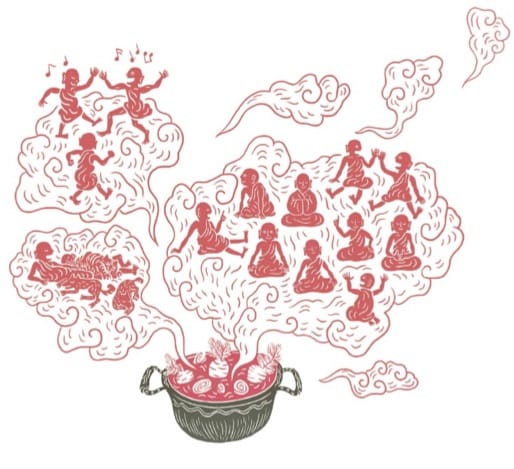 In the recent election we chose leaders who will be required to stand with us through perhaps the most difficult period, for humans, in planet Earth’s history. No matter how much faith we might have in the country’s new leadership, our anxiety about the situation is understandable, because we know that no matter what we do we cannot avoid the karma that is coming—especially the karma that is coming to the United States. Even a cursory meandering through our history and a glance at how our government has treated others, for centuries, would make us throw in the towel, climb into our beds, pull the covers over our heads, and wail.

I would be remiss, as an elder of the planet, to remain silent at this point about some of the ways to deal with this period of emotional, psychological, ideological, and financial instability. For I have by now lived relatively long, compared to some of you who are mere children, though you might be in your twenties and thirties. I am definitely at a plateau that makes the teenage years seem doable. The late twenties and all of one’s thirties are hellish for everyone, as far as I can tell, but at least you’ve been warned. And so I wish to offer a medicine that I take myself (which is the only kind I offer): Anxiety Soup.

Anxiety Soup keeps growing and expanding; it is eclectic, it is self-choosing, and it is already within your reach. The main thing it assumes is that you are coming to it in your right mind—that you’ve put the liquor bottle back on the shelf, said no to drugs of all kinds, and made the manly or womanly decision not to pick fights. In fact, it assumes you consider yourself free. That being so, you are ready for ingredient number one.

Ingredient number one is dance. Actually, it is a toss-up between dance and meditation, but for me, during this period, I find dance trumps meditation, at least sitting meditation, because while listening to the news I find it increasingly difficult to sit still. That is when I put on one of the most instructive, intelligent, historical, and danceable CDs ever made, Back on the Block, by Quincy Jones and a host of fabulous musicians who tell us the wonderful history of our most soulful American music while rocking us into a drenching sweat. I also use this Medicine CD, along with Tina Turner’s astonishingly mature, dark-souled, and survival-oriented Twenty-Four Seven, to pump me through five or six miles on my exercise bike. There is also Deep Forest, the reassuring CD that features the voices of our rainforest ancestors, and almost anything by Oliver Mtukudzi.

But you will make your own list, and many of you, feeling the need for this medicine, have already done so. Having made the list, use it. The best time for dancing and biking, I find, is the morning. If I can get up early enough to spend at least an hour enjoying this medicine, I can listen to most troubling news with a relatively detached mind.

Ingredient number two, in other times, would be ingredient number one: sitting meditation. In my experience, nothing beats meditation, for everything. No matter what the problem, my opinion is: meditation is the solution. I share this belief with a lot of people, most of them more disciplined than I am. I began meditating as a child—and it still seems to me the most natural human state—and learned formal meditation in my thirties. It has saved my life.

For this, any private corner of your house or car will do. When I lived in Mississippi, and the Klan occasionally left its card in our mailbox, I used to meditate in motel rooms. What I like best about meditation is an experience that we can also achieve by sitting on the ground and allowing ourselves to drift into the trees: the taste of eternity. It is this taste that reminds us we will be around longer than however many years we face of anxiety, confusion, and the consequences of our national karma. In fact, once we slip out of mere time and into eternity, fear leaves us entirely. We become aware that we’ve always been, in some form; that we’re not likely to be going anywhere, since the universe, though vast, is probably a closed system. So we might as well relax. There may well be catastrophies in our future, but who dies, ultimately? No one. Of course you and I might, and that would be regrettable, but after a million years, even plutonium will be turned into fertilizer and I’ll probably see you out of the eye of an amoeba. Whatever that eye looks like by then.

Ingredient number three: I just read a statement from my financial planner, who happens to be a good writer, luckily for me. While dealing out the horrid news of financial loss from the Wall Street meltdown, he mentioned one stock that had not gone down, but, in fact, had gone up: Campbell’s Soup. And that brings me to ingredient number three of Anxiety Soup, which is actual soup. But it is soup you make yourself, from scratch. Soup is an amazing food because, like salads (using only fresh ingredients for those), you can make it out of anything: dead or dying lettuce stalks, shriveled up tomatoes and potatoes, crinkled-up mushrooms, sour-pussed rutabagas and turnips, dried-out beans. Whatever you have on hand will do. And soup, no matter what’s in it, always tastes good. No old shoes! But this is a part of soup’s magic: you can only go wrong if you have no sense of taste whatsoever and put in a cup of cumin when you should add a pinch.

Choose your biggest pot, concentrate on cleaning out your entire refrigerator. If you don’t have anything in there, go out and shop. Buy lots of different vegetables, even some you’ve never seen before. Spend an hour chopping off heads and splitting things down the middle; this will relieve tension you weren’t aware you had. Put in lots of onion and garlic; you want to have strong breath. Let your tears fall into the pot—you’re crying for your country. Put on music as you chop and stir, or use the time to do silent meditation, thanking the vegetables for appearing in your kitchen, ready to sacrifice themselves for you. Invite someone to share the soup with you; ladle it out in big earthy bowls. Add brown rice or quinoa if you have it, nutritional yeast (for your nerves), and if you can, eat it in front of a nice homemade fire.

And now, for the last ingredient: snuggling. I have friends who sleep with their dogs who laughed at me because I didn’t understand why the band Three Dog Night called itself that. My dog was always too heavy and hot for me to feel comfortable sleeping with her, but I have enjoyed sleeping with my cat, which is perfect except I become so conscious of her comfort I cease to move, leaving me with various cricks in the joints.

The best snuggling is often with a human; this I have found through much trial and error. So if there are animals around, or a human, you are in good shape. And if your person or animal isn’t a snuggler and you are, this is serious business. You want someone who adores a big fluffy bed, someone who likes the look of lamp or candle glow, someone who enjoys the sound of rain and turns over and smiles when you say I think it will snow. Snuggling is the best ingredient of all for Anxiety Soup because it is free, it is fun, it goes well with old movies, it goes well with pizza, it goes well with two people reading great novels or listening to great tapes. It goes really well with drowsing and snoozing and hugging and cuddling and the flinging over of arms and legs and the intermingling of delicious breaths and the deep peace of happy snoring!

And so, here is a recipe for Anxiety Soup! May we continue to be a hardy race that outlives our tormentors, as one of my grandmothers outlived a century of people who thought they owned her. She did this simply by living to be a hundred and twenty-five. As we might, for all our problems. Part of her Anxiety Soup was the belief that we must never cover up the pulse at our throat, and even in deepest winter she left her own throat bare. Proving, during one of the darkest periods of our Republic—when people were owned by regular folks they saw every day (and were often related to), and not by faceless corporations that hide behind their advertising—that a good Anxiety Soup can be made out of anything.