This past year has seen a disturbing rise in anti-Asian violence across the United States, while the Black Lives Matter movement, particularly following George Floyd’s death, has given America a profound racial reckoning. In this piece, three Asian American and Black Buddhist teachers reflect on healing, solidarity, and how Buddhists of color can work together for greater racial justice. —Nancy Chu, associate editor, Lion’s Roar

A Bridge of Understanding

When we know each other’s stories, says Myokei Caine-Barrett, we open ourselves to understanding and love. 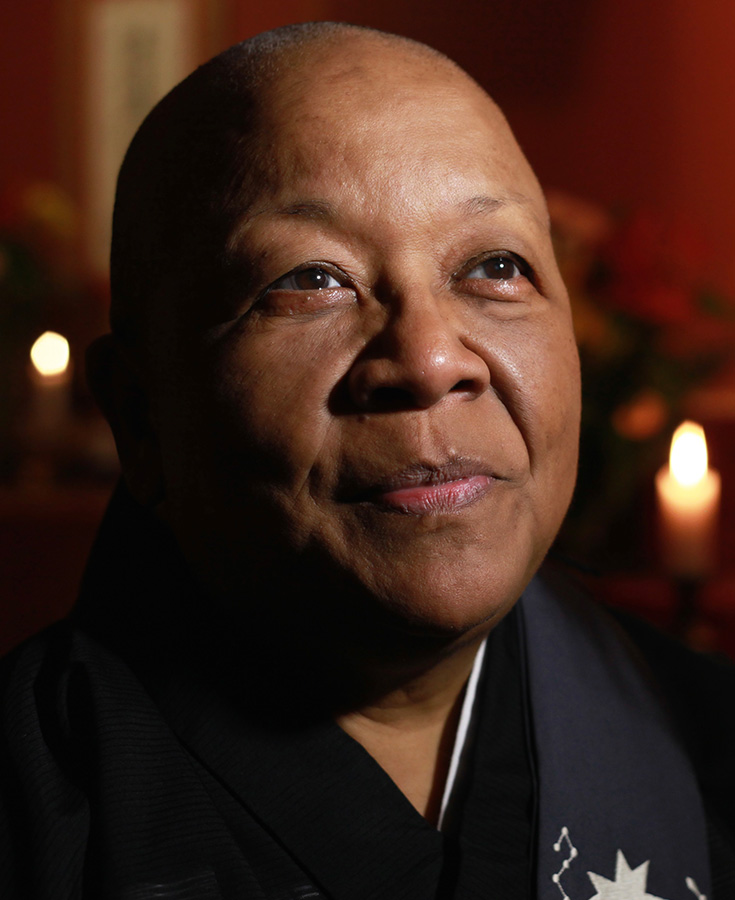 Myokei Caine-Barrett is the first woman and the first Westerner to hold the position of bishop in the Nichiren Order of North America. She is the Chief Priest of the Myoken-ji Temple in Houston, Texas.

I exist because of death and destruction, born after war to a Japanese mother and a Black American father. This duality meant there was no real welcome in Japanese or Black communities, only in those mixed ethnic spaces inhabited by war-born families. I have always been either invisible or exotic, the target of those bold enough to either ask or to advance their own ideas of who I am. I share my story so it is understood that I have skin in this game; because I have lived the racism toward Asian and Black Americans. My family today includes also Latino and white, differently-abled as well as LGBTQIA folks—a range of cultures, and religious and philosophical ideas—all grounded in absolute acceptance and love of kinfolk.

As a Buddhist, ethnicity has little to do with how I show up in the world, except as I choose to embody life as purpose. Buddhism tells us that we are all one, that what affects you affects me. If we take this to heart and practice living this way, we can and will change the world. Many of us have seen this in action as we have witnessed folks coming together to chant and meditate together for the sake of justice and humanity. We have witnessed the coming together of diverse individuals motivated simply by their love of the humanity that binds us all. We live in a time dominated by greed, anger, and ignorance and their elevation to the acceptable. We have also learned from indigenous folks that “Mitakuye Oyasin” [all my relations] is the truth of all our existence—we are kin, relatives, family.

I can be a bridge of understanding for Asian and Black Americans; I know the stories. When we know each other’s stories, we are open to understanding and eventually, to love. That is transformative and we have to take the chance to be a bridge. Despite all efforts to the contrary by our social systems, we are not meant to be separate. The Buddha land of Tranquil Light can only be born when we join hands and hearts.

Whose Liberation Am I Serving?

Minna Jain on the importance of dismantling white supremacy, honoring grief, and living in joy together as Buddhists of color. 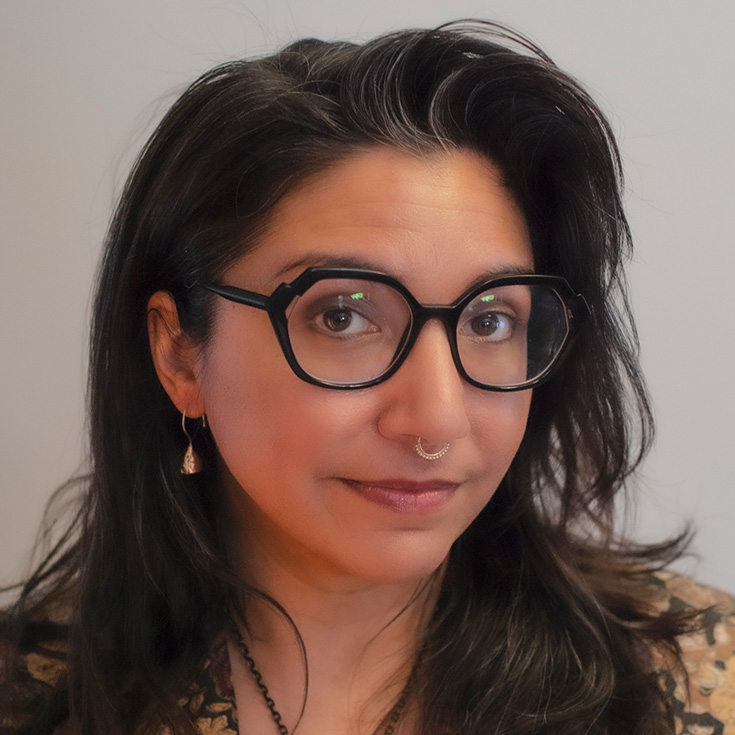 Tensions between Asian American and African American communities are woven into the racial fabric of the United States, with their deepest threads in economic and immigration policies that have long set our communities against one another by design. The heart-rending events of the last 18 months have opened many of these subtle interracial wounds in our Black, Indigenous & People of Color (BIPOC) communities. This is an especially complex tangle in BIPOC Buddhist spaces where we come together in part because of the injuries of racism, but we routinely sideline the fact that Buddhist convert communities in the US have a history of Asian erasure and cultural theft.

Sangha can create the conditions for healing Sangha.

Racism against Asians is an often-overlooked fact in the United States. Grazing the surface, the Chinese Exclusion Act, Japanese internment, the Asian Exclusion League, and the recent surge in anti-Asian violence can attest to this. However, if we are to weave a truly cross-racial tapestry —if we are to be supported equally by the Sangha jewel— we must also candidly face the power relationships between Asian American and African American communities. We must lean into not only our shared experiences and historical solidarity, but also the truths of our differences. We cannot practice together for liberation without acknowledging how systemic greed, hate, and delusion have fabricated a racial hierarchy in the US that privileges Asian Americans more than African Americans.

For me, practicing in BIPOC Buddhist Sangha can sometimes feel like a dance between centering and silencing. I chafe against an Asian American inheritance of invisibility and religious appropriation. It can hurt to feel those conditions reiterated in Sangha. And still, it’s vital that I, as an Asian American Buddhist, acknowledge the US’s racial hierarchy, and engage in the knotty heart-mind yoga of centering African American experiences without forgetting or silencing my own.

Sangha can create the conditions for healing Sangha. Chanting, bowing, sitting together as Asian Americans and African Americans and coming back to our guts, to our centers, where fear lives and lets itself go. This is where we meet the moment, ourselves and each other in our full complexity. Transformative justice occurs within the cultivation of genuine relationships, and commitments to inter- and intra-community care and growth. It’s a slow, messy practice. Over time, it’s gotten easier for me to ask myself, “Whose liberation am I serving?” I continue to hope that it’s ours, dismantling white supremacy, honoring grief, and living in joy together.

We Are in This Together

Coming together to take small, meaningful action is crucially helpful to step toward racial healing, says Bo-Mi Choi. She shares how the community at the Cambridge Zen Center is doing just that. 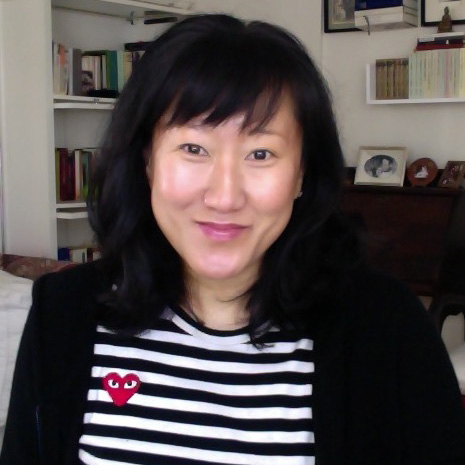 Bo-Mi Choi is a Senior Dharma Teacher in the Kwan Um School of Zen and serves in the capacity of Director of Development and Outreach for the Cambridge Zen Center. She also leads a weekly student meditation group at Harvard University where she teaches philosophy and critical theory in the College.

The Zen Peacemaker’s tenets — “not knowing, bearing witness, taking action” – are as concise as they are wise. They have been a helpful reminder to me in the slow yet steady work we’ve been doing with the Social Justice and Diversity Initiative at the Cambridge Zen Center for the past three years. Back in the summer of 2018, a handful of socially engaged residents and sangha members felt an urgency about confronting the reality of racial injustice in the wake of the Black Lives Matter movement. We also became acutely aware of the lack of diversity within our own practicing community: mostly white with some Asian sprinkles. With the support of the only African American monk in our Zen school, Kwan Haeng Sunim, who had yanked me out of my personal racial slumber during the winter retreat of 2017 when I listened to his dharma talk about his experiences as a Black monk, we started formalizing the initiative by creating two separate groups, BIPOC and Unpacking Whiteness, not with the intention to further divide us but to allow for safe spaces to discuss potentially painful topics.

By literally coming together, we remind ourselves that we are in this together.

As a Korean woman who grew up in Germany but who has lived in the US for over twenty years, I am part of the Cambridge Zen Center’s BIPOC group. Regularly attending the bi-monthly meetings for the past several years has enabled me to start digesting some of my own undigested experiences as a person of color. More importantly, it has given me the chance to listen to other BIPOC members’ racial experiences, to intimately share in their struggles as an African American, Hispanic, Southeast Asian or racially mixed person within a world that is organized according an often visible but also strangely subconscious code of racial hierarchy.

The fruitful tensions we keep addressing as a group seem to coalesce around the question of how we can voice and embrace the differences among BIPOC groups, including social and historical conflicts between racial minorities that are real and undeniable; yet at the same we also ask ourselves how to best keep our minds and hearts open to the human condition we all share, which, as the Buddha clearly stated, is fundamentally rooted in suffering. This shared suffering is what substantively connects us all, and from a Buddhist perspective, it is a sufficient cause for standing in solidarity with those suffering because of their race, gender or any other perceived difference.

For me, the BIPOC meditation group has been a great source of comfort and support during these turbulent times of racial reckoning, especially this past year of global awakening in the aftermath of George Floyd’s murder. As we prime ourselves for taking “bigger” action on the political fronts, by communing twice a month we are “taking action,” albeit in small yet meaningful ways right here and now. These small actions are crucially helpful in counter-balancing the sense of isolation and helplessness when confronted with painful incidents of racially motivated violence. By literally coming together, we remind ourselves that we are in this together. And it is proverbially the first step we can take in the long and difficult, yet rewarding, journey ahead of us, a journey we must embark on with each other if it is to take us towards racial healing.

Myokei Caine-Barrett, Shonin, was the first American woman and the first person of African Japanese descent to receive full ordination as a Nichiren priest. Today, she is the bishop of the Nichiren Shu Buddhist Order of North America. Based in Houston, where she is the guiding teacher of Myoken-ji Temple, she also leads two prison sanghas and has been active in Healing Warrior Hearts (a program for veterans returning home) and The Gathering: Buddhist Teachers of Black African Descent.

Bo-Mi Choi is a Senior Dharma Teacher in the Kwan Um School of Zen and serves in the capacity of Director of Development and Outreach for the Cambridge Zen Center. She also leads a weekly student meditation group at Harvard University where she teaches philosophy and critical theory in the College.