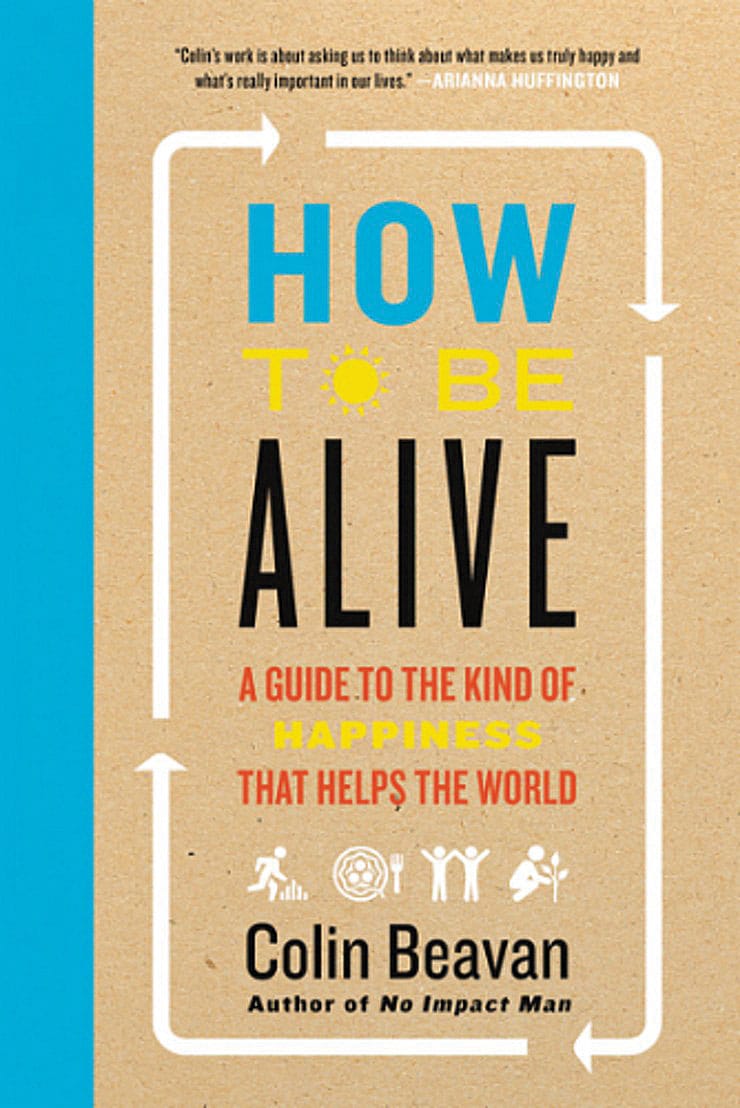 How to Be Alive

A Guide to The Kind of Happiness That Helps the World

How to Be Alive isn’t the usual self-help book. Colin Beavan, known as the “No-Impact Man,” is an American writer and activist who in 2011 gave up gasoline-powered transportation, shipped-in food, and a host of other twenty-first-century conveniences to reduce his carbon footprint. In How To Be Alive, he issues a clarion call to eschew the standard life choices to join the growing group of freethinkers seeking a new path forward. Beavan, who is also a dharma teacher in the Kwan Um School of Zen, says one way to do that is by simply waking up—to ourselves, to what makes us truly happy, and to the world’s dangers and opportunities. Serious stuff, but the former magazine writer leavens his advice with enough real-life anecdotes to make the journey a pleasant one. 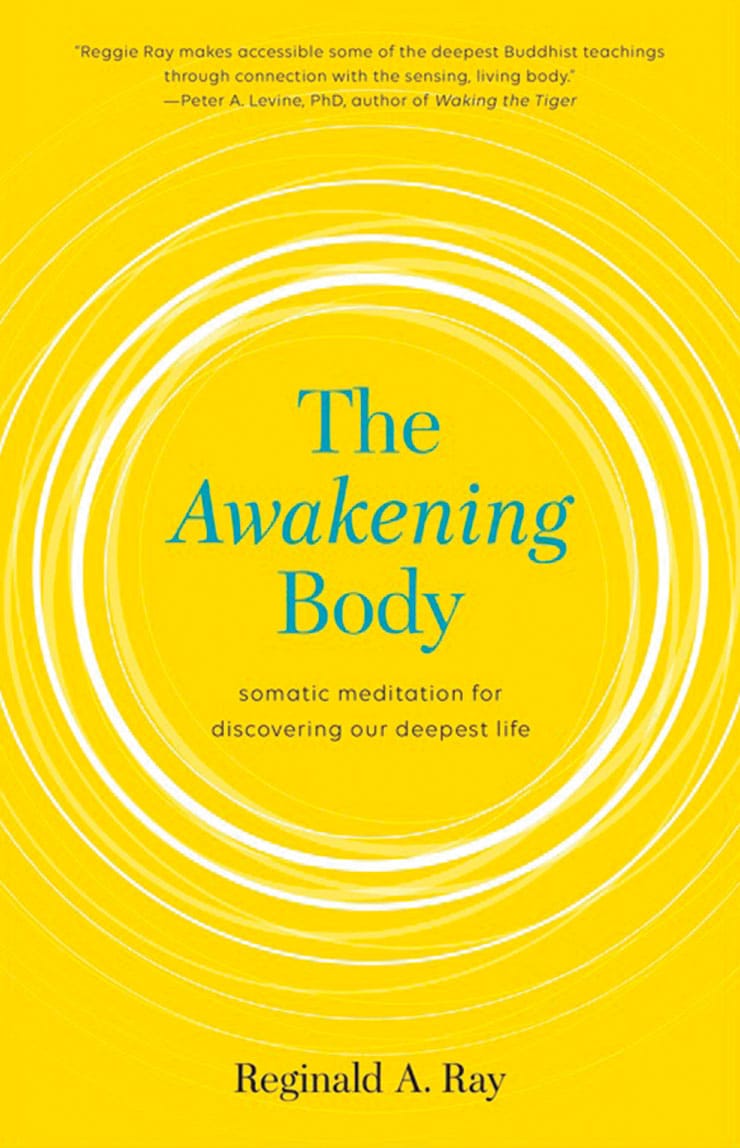 While much Western Buddhist thinking focuses on the mind, Buddhist teacher Reginald Ray argues that the human body plays an important role in connecting us to what matters. In a step-by-step teaching, he describes how practicing six somatic meditations transforms the most basic aspects of the human experience into “sources of insight, freedom and joy and revelations of the deepest mysteries of the universe.” Ray also explores how these meditations may even put us in sync with the imperatives of the human genome, which he feels is predisposed to seek spiritual realization. 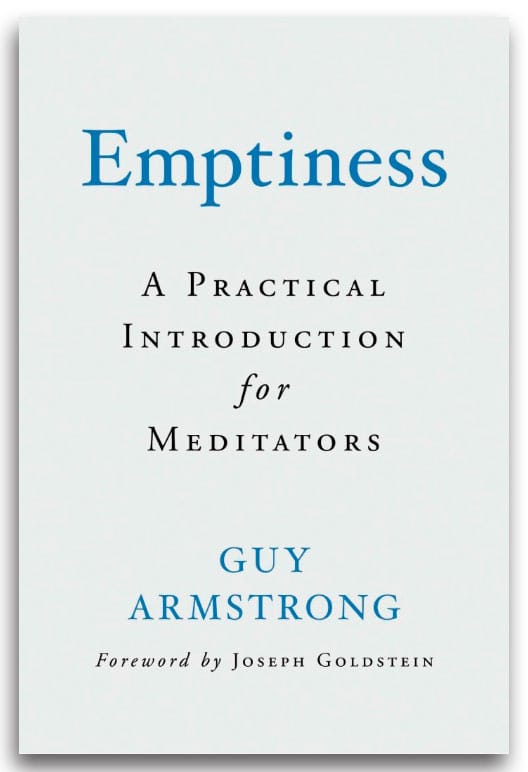 A Practical Introduction for Meditators

Over the centuries, the term “emptiness” has taken on a number of meanings in Buddhism. It is also widely misunderstood, leading people to see Buddhism as nihilistic or life-denying. In Emptiness, Guy Armstrong, a guiding teacher at the Insight Meditation Society, unpacks this concept in a straightforward and practical manner, inviting readers to discover its liberating truth through their own direct experience. “If you keep emptiness at the center,” he says, “it will show you the way to the greatest freedom, and that will open the doors to a heartfelt connection to all of life. When emptiness is possible, everything is possible.” 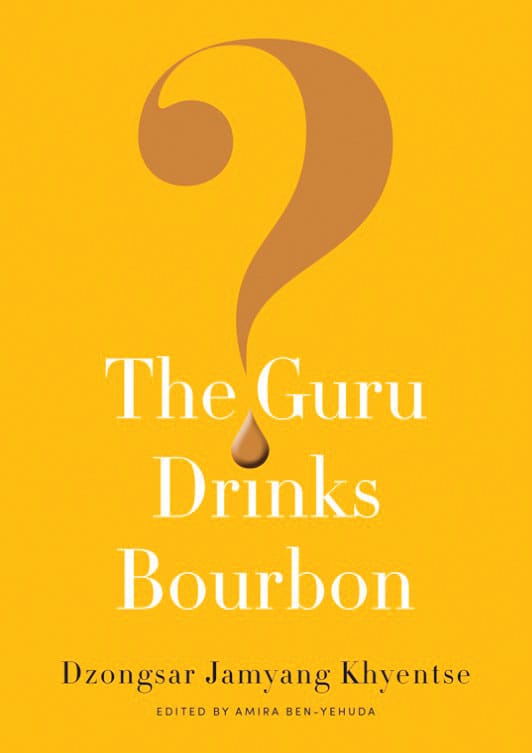 Dzongsar Jamyang Khyentse Rinpoche writes, “Deciding to follow another human being—not a god, not a machine, not nature, not a system of governance, not the sun or the moon, but a shower-taking, sleeping, yawning, shitting, moody, bribable human being—is either the most stupid thing a person can do, or the most rewarding.” It’s a gift, he continues, to have the inclination and tenacity to study with a guru, but this isn’t a gift everyone has. While the guru–disciple relationship is paramount in Vajrayana Buddhism, it flies in the face of Western individualism. The Guru Drinks Bourbon? covers three main topics: choosing a guru, following a guru, and taming your mind. There’s also a bonus section for anyone bold enough to think they might be guru material themselves. 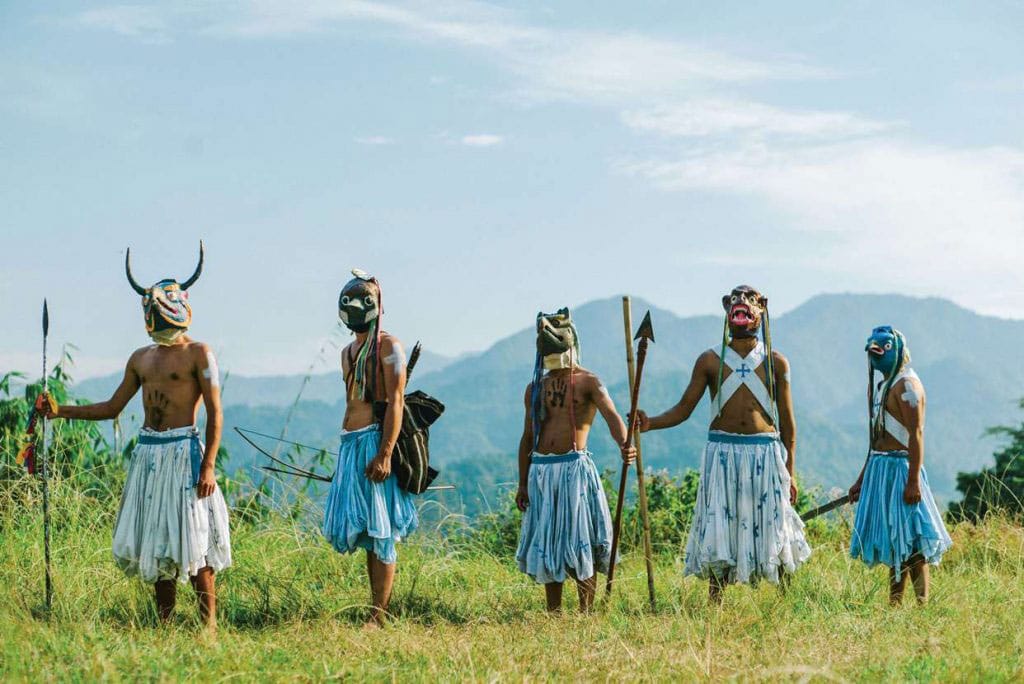 Sing Me a Song While I Wait

A film directed and written by Khyentse Norbu

Dzongsar Khyentse Rinpoche is an accomplished filmmaker as well as a Buddhist teacher, directing under the name Khyentse Norbu. His debut was Bhutan’s first feature film, The Cup, a comedy about young Buddhist monks who are crazy for soccer. His second film, also set in Bhutan, was Travellers and Magicians, a darker film with echoes of Tishigahara’s Woman in the Dunes. Now we have the visual feast of Hema Hema. It opens in a nightclub with a hostess counting the tips she has hidden in her fishnet stockings. Then it cuts to a remote forest in Bhutan. An elder has selected a group of men and women unknown to each other to form a temporary community and discover who they are when they are masked and anonymous. The participants quickly become drunk with the freedom their masks afford them. At the end of the film, we are hauntingly brought back to the nightclub, where we discover the hostess’ connection to the events in the forest. 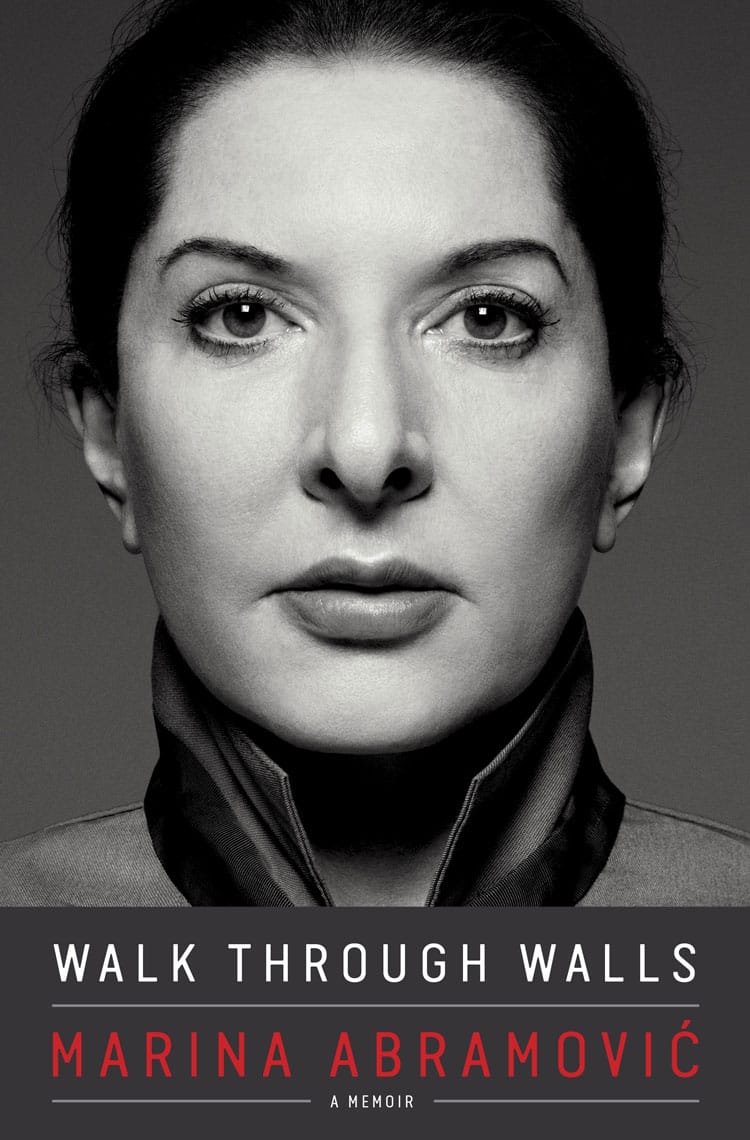 Performance artist Marina Abramovi´c is famed for sitting in a chair for 700 hours at The Museum of Modern Art while people waited in line for the chance to sit opposite her. In her memoir, Walk Through Walls, she reveals how deeply Buddhism guides her life and art. It’s a sweeping saga that begins in postwar Yugoslavia and continues through her formative artistic years spent travelling throughout Europe in a van with Ulay, her former lover and collaborator. A chance encounter in India with Ling Rinpoche, a teacher of the Dalai Lama, opened Abramovi´c’s heart to the lessons of the dharma. Afterward, vipassana meditation became a cornerstone of her performance method, one that tests the endurance of both performer and audience. Casting free-spirited, wayward Tibetan lamas in her works gave Abramovi´c—a performer literally willing to shed blood for her art—humorous lessons in the importance of detachment. These are tales even non-Buddhist readers can enjoy. 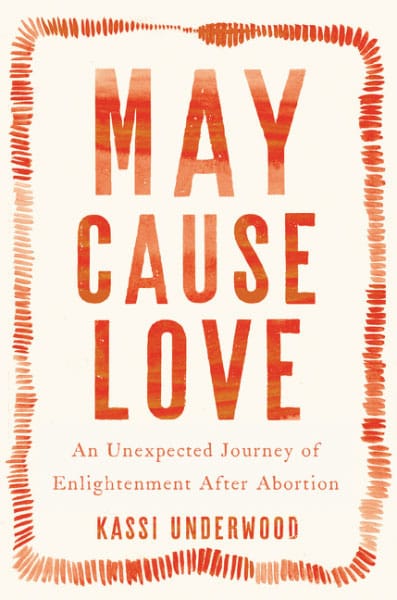 An Unexpected Journey of Enlightenment After Abortion

One in three American women will have an abortion before age of forty-five, yet almost no one speaks openly about the experience. Kassi Underwood is out to change that. She’s firmly pro-choice but knows from personal experience that it doesn’t matter which side of the political divide you’re on; an abortion can be emotionally painful, and our collective silence around it only exacerbates that pain. Underwood had always wanted children, but then she got pregnant and it wasn’t the right time or the right partner. Underwood aborted. Years went by and she got sober, finished her studies, got a lucrative job, and travelled. Yet she still felt deeply troubled. In an effort to face her grief, she embarked on an intentional journey of healing that included various post-abortion religious ceremonies, including a mizuko kuyo at a Shin Buddhist temple. This Japanese ritual, which invoked Jizo Bodhisattva, the protector of unborn babies, at last gave Underwood relief from her reoccurring nightmares. 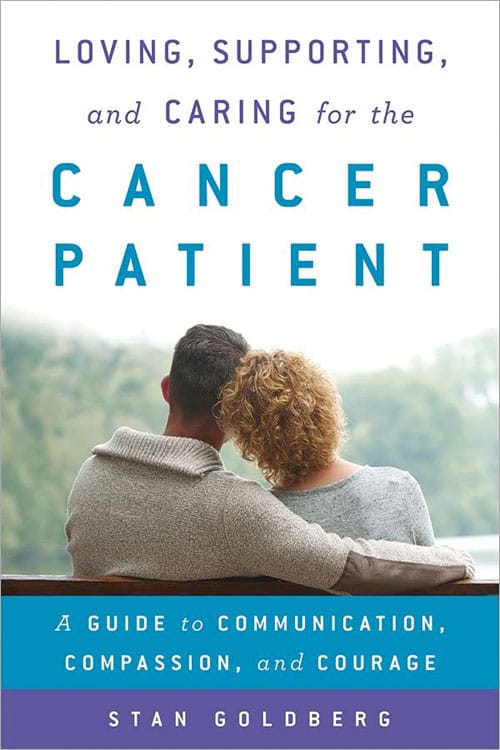 Loving, Supporting, and Caring for the Cancer Patient

A Guide to Communication, Compassion, and Courage

Every year, fourteen million people in the world are diagnosed with cancer. Given this number, it’s inevitable that at some point in your life, at least one friend or family member will tell you, “I have cancer.” You will, of course, want to do and say the right thing. Yet if you’re like most people, the C-word will strike such fear in you that you’ll be at a loss for the right actions and words. In Loving, Supporting, and Caring for the Cancer Patient, cancer survivor and hospice volunteer Stan Goldberg explains what it’s like to have cancer and how people respond to it differently. He offers practical, mindful advice for turning your compassion into helpful action. The book is divided into eighty-three pithy sections on topics such as “Accept and Support Treatment Decisions,” “Witnessing Pain,” and “Living in the Present” that cover all the stages of this disease. ©