After the Muslim ban was instituted, Buddhist scholar and priest Jeff Wilson vowed to renounce his attendance at conferences in the USA. As a society, he says, it is imperative that we stop hiding behind borders. 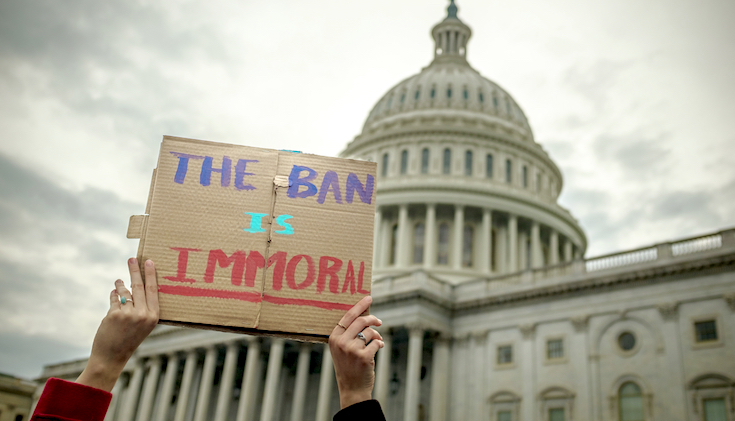 Protstors at the US Capitol hold a sign at a Mulsim ban protest in January, 2017. Photo by Ep Jhu.

In November I didn’t go to the annual joint meeting of the American Academy of Religion (AAR) and Society of Biblical Literature. It’s a four-day conference of about 10,000 Religious Studies scholars, where we present our research and reconnect with friends from around the world. It’s exciting to engage in the latest discussions in Buddhist Studies, and I founded the AAR’s official research group on Buddhism in the West. With the possible exception of my family’s annual camping trips, the AAR is my favorite event of the year. I don’t go anymore.

In January 2017, shortly after taking office, President Trump announced a travel ban on citizens from seven Muslim countries, and a ban on all refugees for several months. Modified a bit, the anti-Muslim travel ban remains in effect, and the United States has taken in dramatically fewer refugees than usual. Among the results, families are torn apart, schools and businesses struggle with the loss of workers and customers, and the most imperiled people in our world — the majority of them children — are stuck in situations of misery instead of reaching safety.

With a racist ban against certain people, the United States is no longer academic free soil.

America’s border policies also impact scholars’ ability to conduct our work: we need to freely assemble and share information with peers around the world, in order to understand and analyze complex religious and social phenomena. Beyond the loss of colleagues from the actual banned countries, many scholars worry about attending the AAR because they could be targeted for extreme vetting at the border. Put simply, with a racist ban against certain people, the United States is no longer academic free soil.

I’m a dual American and Canadian citizen, able to enter the U.S. smoothly without anxiety. And my minority status as a Buddhist priest isn’t perceptible to border agents: I’m light-skinned, I have an English name, I don’t travel in my robes, and border agents don’t recognize my closely-cropped head as a monastic hairdo. So I don’t run into the hassles that Muslim friends regularly report. Nonetheless, the border poses its own challenge to me: given the suffering caused by the ban, the way it entrenches racism in American policy, and how it harms academic scholarship, is it right for me to exercise my privilege and go to the AAR?

Shortly after the ban was instituted, I vowed not to attend international conferences in America so long as colleagues from arbitrarily-targeted countries are excluded.

Boycotts aren’t unusual among politically-concerned people. But in my own mind, at least, I don’t conceptualize staying home as a boycott. After all, I’m not opposed to the AAR or other scholarly organizations: their work is more important than ever in the current climate of fake news, intolerance, and anti-intellectualism. Rather, for me, it’s an act of renunciation — a central form of Buddhist practice — and the manifestation of a vow, another primary Buddhist action.

Boycotts often follow a familiar pattern: righteous indignation, swearing off of some activity, initial enforcement, flagging enthusiasm, and eventual abandonment of the boycott. It’s a natural cycle, one I’m vulnerable to just like everyone else. I really want to go to conferences. But religious commitments have a greater chance of long-term success because they’re carried out not just from momentary anger, but grounded insight into the need for action — and renunciation is truly an action in Buddhist understanding. Indeed, because it’s a conscious action renunciation plants positive karmic seeds that help maintain your vow.

Borders manifest in part because of a failure to recognize that no-self applies as much to countries and cultures as it does to individuals.

Vows have very real power in Buddhism: in fact, they’re the root causes of all successful journeys toward full wisdom and compassion. For example, in my tradition of Pure Land Buddhism, Amida Buddha’s vow to liberate all beings guarantees the eventual Buddhahood of everyone. And this universal embrace of the Buddha also serves as an example of how we should feel toward our fellow beings.

Of course, the vow not to go somewhere is only the stable foundation on which my border-related activism rests. My vow also prompted me to write and call my Congressional representatives many times about border issues, to begin raising consciousness about border and refugee issues in my Dharma talks, and to lobby the AAR to move its annual meetings to Canada, where international scholars can still attend without fear. And I organized a panel to discuss the matter at the local AAR chapter’s meeting held in Canada. The vow also causes me to briefly report my renunciation and its reasoning each time I am asked to come to the AAR by colleagues (a frequent occurrence), because this gives me the opportunity to remind them that others also won’t be there.

The Muslim ban was only the first in a long chain of shameful border policies under the Trump administration. It was followed soon enough by family separations for undocumented border crossers, the cancelation of the DACA policy, termination of protected status for hundreds of thousands of legal immigrants, costly militarization of the border as a political campaign stunt, denial of asylum rights, and many other reprehensible actions. Sadly, each week brings new outrages, such as tear-gassing children, which help to keep my vow strong. All of these cruelties manifest from an attitude deeply affected by the three mental poisons of hatred, ignorance, and greed.

Borders are social phenomena, not real things. They manifest in part because of a failure to recognize that no-self applies as much to countries and cultures as it does to individuals. The impulse to hide behind walls is the most literal manifestation of deluded self-attachment that I can imagine. Until some sanity and compassion is restored to American border policies, I hope my absence can help remind my colleagues of who else is missing.