When Diana Reynolds Roome brought home a thangka of Manjushri from Nepal she wondered, “How could I bring this great bodhisattva into my humdrum existence?” 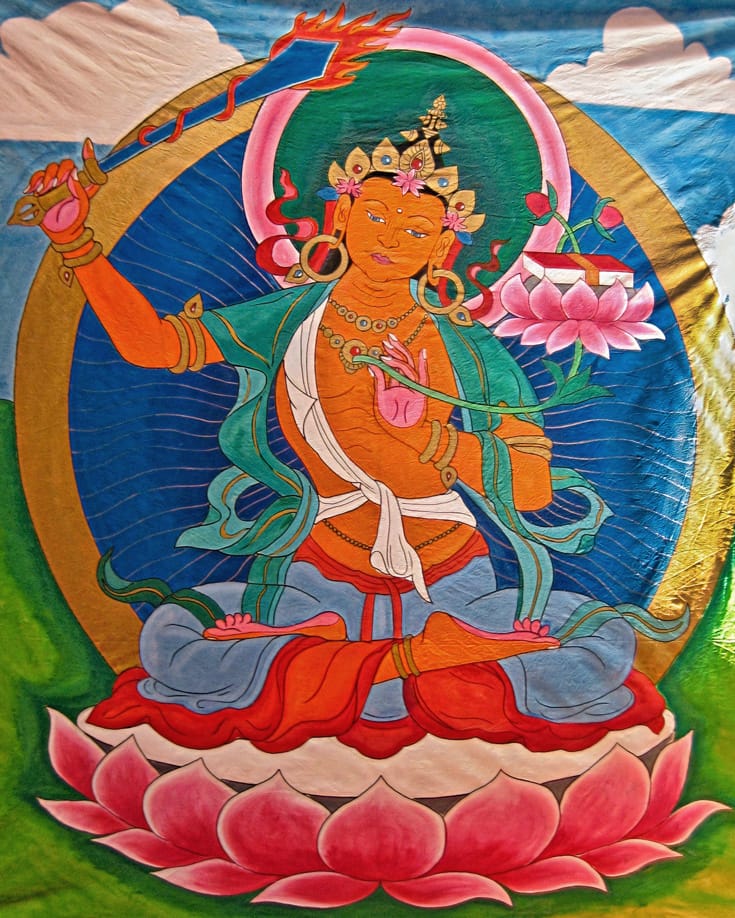 A Manjushri thangka, painted by Cecilia at Buddhafield Festival 2006. Photo by John Wigham via Wikimedia Commons.

On my last trip to Nepal, I purchased a thangka of the great bodhisattva Manjushri in a tiny shop on the eastern edge of Kathmandu. I carried the sacred artwork through a series of airports on a two-day journey home to Oregon. When I arrived home and safe, I found myself unable to unwrap it from its traditional brocade. I’d longed for this image for fifty years, but how could I expose it to the light of the Western world? How could I bring Manjushri, this great bodhisattva, into my humdrum existence?

I first encountered Manjushri five decades ago while teaching at a school in Nepal near the city of Patan. The school was near the Chobar Gorge, where legend says Manjushri slashed through the mountains with his flaming sword. In doing so, he drained a great lake and created the Kathmandu Valley. Geological studies concur with this scenario – though they leave out the tale of Manjushri’s part in it.

I still have black-and-white photographs of the children and teachers, who have all long faded from my life. One photo shows me sitting on a rock playing a violin. It’s the only image I have of myself during that year in Nepal — the only proof that I was there at all.

The Chobar Gorge seemed unimpressive back then and it still does, considering the myth of what took place there. Today, a small, swaying footbridge stretches over the rush of water that drains into what’s left of the lake – a grey expanse of water with a temple on its edge.

Manjushri is also associated with the Swayambhunath Stupa, which sits on the western edge of Kathmandu. According to tradition, the bodhisattva founded the sacred site after a lotus sprung from the lake, holding the Prajnaparamita Sutra in its jeweled petals. The tale of Manjushri and his personification of wisdom and knowledge stuck with me.

Weeks after returning from Nepal with Manjushri, I continued to find excuses to leave the thangka in its wrappings. I was recovering from a deep cough resulting from the pollution and dust that choked the Kathmandu Valley. I was still tired from my long plane journey home — the list went on. As I recuperated and readjusted to my regular routines, the thangka remained unopened.

I paced the rooms of my home in search of a suitable space. Each crevice, door, and wall seemed to be already crammed with pictures and books. I felt as though my home was rejecting the startlingly different view of reality that Manjushri brought with him. I considered leaving him rolled up in his gold and scarlet wrappings until I could change my life enough to accommodate him.

Manjushri was finally here, in the warm, early summer air of Oregon.

So there he sat, in subtle colors on a lotus throne, Himalayan snow peaks gleaming in the distance. A flaming sword was lifted in one hand and a volume of the great Prajnaparamita Sutra in the other. Would it diminish the power of this mythical figure to hang him anywhere other than a shrine dedicated to him? I felt I should at least hang him amongst other sacred images, as “good Buddhists” manage to do in even the smallest of homes.

It felt awkward to tell my husband that I’d brought home an image of the great bodhisattva. It almost seemed necessary to ask his permission to bring this presence into our shared space. It wasn’t simply a picture to hang on the wall. The energy that emanated from the thangka meant we couldn’t walk past without affect. Manjushri surely couldn’t share the same space as our oil paintings of Venice, the delicate watercolors by my mother, or masks from Nepal and Mexico.

To me, Manjushri represented a reality so profoundly different from my own everyday one that the perceived clash of truths wedged a disconnect in my mind. What was illusion and what was reality? I reminded myself that at its core, Buddhism embraces all life. What did it matter anyway?

Finally, I felt strong enough to let the image out. I cleared the dining table of its usual clutter and with some trepidation, placed the scroll on its top. I unrolled it with care, revealing the golden fabric that covered the image. With a special pleating movement shown to me by the owner of the thangka shop in Nepal, I slowly lifted the curtain. There was the lotus throne, and the upturned feet revealing a perfect lotus posture. There was the graceful torso, and the hands lightly holding the stem of a lotus that supported a sacred text. There was Manjushri’s sword shooting flames, and the hand that held it with graceful determination, completely absent of violence.

I threaded the folded fabric into the loop at the top to make a rosette, crowning the image with an air of ceremony, then stepped back instinctively and bowed, hands together at my heart, breathing with relief. Manjushri was finally here, in the warm, early summer air of Oregon.

I looked at the tiny stylized peaks of the Himalayas behind him, thinking of the path it took for this image, idea, and philosophy to travel through time and space to the twenty-first century on my side of the world. It seemed profane to dangle his eminent form from a regular brass picture hook on the door to my office, but that’s exactly where I put him. After all, a bodhisattva’s avowed mission is to stay with us humans as we toil and flounder through this material universe. There’s a special generosity in refusing to turn away from chaos, sin, and suffering — never being above it all.

Manjushri may appear to be sitting up in the clouds, but he’s also right here, in the mundane world with me.

Diana Reynolds Roome, writer and editor, has been a student of the Middle Way ever since first encountering Buddhism in Nepal fifty years ago. Since then she has tried to keep learning and practicing in England, California and Oregon.