To truly wake up, writes Kimberlyn David, we must expand our understanding of freedom like the Buddha did. 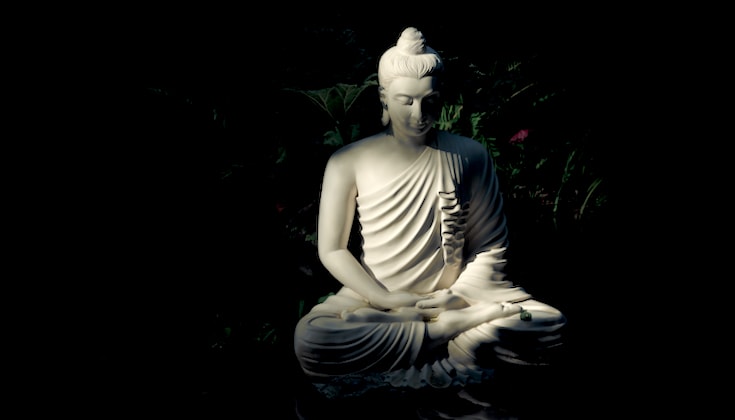 After six years of compassion-based meditation practice, I don’t call myself a Buddhist—and I’m not sure I’ll ever feel inclined to label myself with the “B” word. Still, it’s the path of Buddhism I walk because the dhamma opens my eyes and speaks to my heart in ways that no other spiritual approach has or can. It has shown me where and how to clear boulders blocking the road to mind-body healing. It continually teaches me that, try as I might, there’s no running from present circumstances—and that I can love every messed-up part of myself. Above all: It grounds me in the reality that where there’s a dearth of compassion for ourselves and others, there’s a depth of suffering.

Like anyone else who braves the waters of meditation, I come to the cushion to navigate life’s ups and downs with greater patience, skill, and peace. That cushion is where I continuously slough off layers of internalized racism and patriarchy. It’s where, as a woman, I practice remembering that I’m a good-enough human, despite feeling boxed in by a culture obsessed with superficial, gendered “norms” of appearance and behavior. It’s where, as a gig-economy worker, I practice remembering that I’m not a failure and that overworking is a trap. It’s where I remember that I’m not alone in grappling with modern life; that we’re all participating in and affected by a mind-boggling system that sows and thrives off division, inequity, and greed.

“We don’t have the monopoly of crazy in our modern world,” says Professor Amelia Hall in a video lesson on the first and second noble truths. Her words energize me. There’s no denying we live in unnerving times. But the Buddha lived in nutty times, too. That’s an encouraging reminder that we can steer our ship in a much saner direction. It’s this kind of down-to-earth perspective I hoped for when I enrolled in the Three Turnings of the Wheel, a four-course series by Lion’s Roar and Naropa University. As Professor Hall notes, “Buddhism didn’t originate from some sort of blank space.” I signed up for this course, in part, to see how the spiritual and social history of Buddha’s time could be made useful to our present.

I’m familiar with the well-known story about Siddhartha Gautama glimpsing reality outside the palace walls and then venturing beyond his privileged life to seek enlightenment. But until taking the first part of the course series (First Turning of the Wheel: The Nature of Mind and Emotions), I hadn’t learned about the broader context of his liberation. While he awoke to the personal suffering that can arise from sickness, old age, and death, he also sought to transform the collective suffering we create through social exclusion and other structural injustices. Through Professor Hall’s teaching, I come to interpret his quest as a bold response to the day’s spiritual and political conventions, including the caste system.

The Buddha didn’t liberate himself only to hibernate in a bubble of joy. Post-enlightenment, he bucked social convention by offering the teachings to anyone who sought them, “untouchables” and women included. Thus, he challenged the power structures that excluded entire groups of people from pursuing a spiritual path, let alone freedom from an unfair political system. The Buddha was, in today’s parlance, a radical. He was a rebel with a supremely good cause: peace and happiness for all. Why this matters for us today: To go against the grain of social “norms” that perpetuate cycles of suffering takes nothing short of a rebellious streak.

Freedom is a practice, and that practice isn’t the sole domain of Buddhism.

The phrase “social change” may not have been used during the Buddha’s time, but it’s nevertheless relevant to compassion-based meditation practices, then as well as now: racism, sexism, ageism, classism, and all forms of other-ism create immense levels of harm. If the point of practice is to expand our capacity for acknowledging and transforming suffering wherever it exists/whenever it arises, then surely social change is a part of our program. With the rise of exclusionary rhetoric and actions from religious and political leaders, how could it not be?

Any compassion-based meditation practice involves connecting dots between past and present circumstances. I was born and raised in the United States, where the Fugitive Slave Acts of 1793 and 1850 legalized the recapture of escaped slaves while also criminalizing anyone who provided them a safe haven. Just a couple of months ago, a jury deliberated whether a humanitarian aid volunteer named Scott Warren should get a 20-year prison sentence for the “crime” of giving undocumented migrants crossing the Sonoran Desert water and food (they deadlocked, leading to a mistrial). Here in Europe (I currently live in the Netherlands), nationalistic governments push for legislation to make it illegal to rescue endangered refugees at sea. We are criminalizing compassion.

As a brown-skinned woman, I literally owe some of the freedoms I enjoy to the many courageous (and non-Buddhist) people who took on miles of suffering in their fights for liberation. Because of their resolve, I can: vote; earn my own income; speak my mind without the threat of being lynched; marry whomever I love if I so wish; if that marriage was to crumble, file for divorce on my own terms; walk down the street without fear that I will be nabbed and sold into slavery. None of these freedoms I take for granted. Freedom is a practice, and that practice isn’t the sole domain of Buddhism. It has been, and still is, struggled for by people the world over, in extraordinary ways and often under horrendous circumstances. These people can be our teachers too.

I’m often inspired by Frederick Douglass, who upon being freed from slavery tirelessly advocated for the emancipation of all slaves. His work included running one of the most successful abolitionist newspapers in the United States, and he was an early supporter of women’s rights. Through his fiery writing and speaking (made all the more astonishing by the fact that, as a slave “owned” by a brutal “master,” he risked death to teach himself how to read and write) he consistently championed a truth: No one is truly free unless everyone is free.

The history of the Buddha’s enlightenment offers us the deepest understanding of freedom, but by broadening our scope and informing our practice with other histories, we can be crystal clear on why compassion in our time absolutely matters. Douglass once said, “We have to do with the past only as we can make it useful to the present and to the future.” We must continue the work of freeing others from subjugation and maltreatment, so that we can all be free.

The Three Turnings of the Wheel course is giving me a theoretical backdrop that had been missing from my sitting practice. I’m looking forward to the second part of the course with Professor Phil Stanley, because it promises to dig into the relationship between compassion and wisdom. For now, I’m ruminating over Thig 1:3 Puṇṇā, a sutta that reads to me like a message of love for humanity:

Puṇṇā, grow full with good qualities
like the moon on the fifteenth day.
With discernment at total fullness, burst
the mass
of darkness.

Kimberlyn David is a freelance writer, editor, and content producer. After living outside the United States for about a decade, she now hangs her hat in the Netherlands.