Siddhartha taught that moral responsibility was an important tool for the prevention of dukkha or suffering. But, says Zachary Bremmer, clinging to the five precepts as law can cause more suffering than it prevents. Instead, we should approach the five precepts as training wheels to guide our practice. 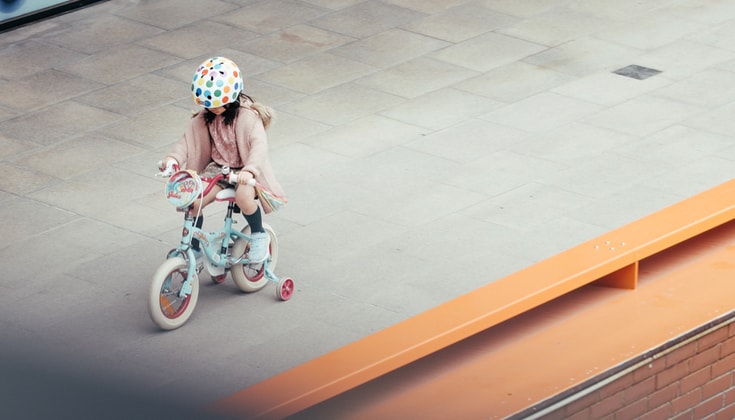 On a bright May morning, I made a promise to my 6-year-old self. I was tired of all the scraped knees. I was finished picking gravel out of my hands. And, being the eldest son, I had to make sure that my younger brother did not show me up. As I finished my breakfast, I took the most sacred vow of my young life: by the end of the summer, I would get rid of my training wheels and ride my bike like it was meant to be ridden—on two wheels.

Over the next three months, I logged more hours on my Huffy than most CPAs put in at the office during tax season. Through everything that a Pennsylvania summer had to offer, from 100° heat, blaring sun and 100% humidity to powerful thunderstorms and screaming winds, I endured it all. My goal was set and nothing was going to stand in my way. By August, I felt that I could not practice for one more minute. All of my energy had been honed and focused over the last few months toward this final test. I was ready.

The first time I tried to ride without my training wheels was a disaster. I managed to make it a mere five feet before falling face-first onto the searing asphalt. A little worse for wear, but full of fortitude I got up, brushed myself off and got back on my bike. I was not about to let one fall stop me. Not surprisingly, though, that one fall quickly turned into two, then three, then four. The rest of my afternoon was spent in much the same way. By the end of the evening, I had become completely disheartened and was ready to throw in the towel. I had spent a whole afternoon practicing and to what end?  I had nothing to show for it but some nasty road rash and a pair of torn jeans. I reluctantly told myself that I would try one more time before I gave up for the day.  And that is when it happened.

I remember that moment to this very day. It was as if something finally clicked inside of me. After all of the effort, all the pain and frustration, I had finally done it. I was riding on two wheels! The adrenaline pumped through me; I had never been more excited. As the wind blew slowly over my face, I let out a cheerful yell. Looking back on that day, I realize that riding my bike was not the only thing I learned that summer. I also learned that practice does indeed make perfect, a truth that holds for all aspects of life.

Siddhartha Gautama, the Buddha, also realized the importance of practice and, like my parents, he realized the value of having a set of training wheels to guide this practice. One set of training wheels that he provided for practice are the five moral precepts. These precepts are both very basic and widely applicable. Providing this type of system gave lay practitioners the ability to live in accordance with the precepts in their daily lives and gain the benefits of practice without having to take the more drastic vows of a monastic.

The five precepts that Gautama expounded require the practitioner to abstain from pāņātipātā (taking of life), adinnādānā (taking that which is not given), kāmesu micchācārā (sexual misconduct), musāvādā (false speech) and surā-meraya-majja-pamādaţţhānā (consuming intoxicating substances). The reasoning behind providing these specific precepts is quite straightforward: all of these actions cause suffering. The goal of the precepts, then, is to aid in eliminating the unhappiness that we bring upon our selves and place upon others through poor actions. This is easily understood on a pragmatic level. For example, we won’t suffer from being sent to prison if we don’t drink too much and decide to rob a bank. Adhering to the precepts works to prevent this type of direct suffering.

The brilliance of the precepts is that they also work on a much more subtle level. The not so obvious benefit is that through our practice we are not only transforming externally by avoiding unskillful ways of acting but simultaneously transforming the internal structure of how we think about and react to certain situations. If I habitually give in to my cravings I will certainly suffer as a result because, as Mick Jagger pointed out, I can’t always get what I want. If I do not allow myself to be pulled around by these insatiable desires, though, I will become awakened to a new way of dealing with these feelings. I will begin to realize that I do not need to act on my lust for food or drink or objects. I will no longer be ruled by an endless cycle of grasping but rather simply take notice that I have certain desires and let them be. The precepts help to accomplish this.

During the beginning stages of practice, strict adherence to these precepts as rules is necessary. Like training wheels, the precepts guide the practitioner and aid in cultivating moral balance. The beginning stages of practice act as a sort of moral detox to rid us of our deeply embedded bad habits. This stage is often very difficult, which makes adhering to these principles as law crucial. Over time, we begin to break down our bad habits and the precepts become second nature.

As one’s practice continues to progress, however, certain problems with these rules will begin to arise. Situations will come up in which the precepts will not be able to answer the question, “What should I do?”  The prescription that was once as clear as black and white becomes increasingly gray and the precepts fail us. When failure of this type occurs, it forces us to look deeper into the nature of the system. The problem with using any type of training wheels is that after a certain point, they can no longer help us progress. In order to get any further, we must take them off and learn to balance on our own. When the precepts fail to provide us with an answer, we need to find a more fundamental discriminating factor for moral action.

The failure of the precepts is not because of some fault of the practitioner but rather lies within the system itself. Buddhist ethics conspicuously lack an explicit meta-level analysis that describes how these rules should be applied. There is no talk of a maximizing factor, no hierarchy of duties or any universalisability clause. Without some road map guiding our application of these precepts we are left in the dark. The hope of a guiding light to illuminate our way comes from looking into Gautama’s ultimate goal: the cessation of dukkha and the realization of nirvana.

The elimination of dukkha is based largely upon the cultivation of wisdom. The Buddha’s prescription for cultivating wisdom is radically simple. Like any caring father, he tells us to “Sit down, shut up, and pay attention.”  This is the basis of a meditation practice that forces us to come face-to-face with our delusions. It is only through facing these misconceptions directly that we can ever hope to end their control over us. The more we practice in this way, the deeper our understanding becomes. Eventually we will get to a point where our insight becomes so deeply rooted that we no longer let ourselves get dragged around by our thoughts. Meditation helps us to cultivate the skills necessary to simply accept these states as they come along like clouds passing through the sky. We learn that these qualities, just like all other phenomena, arise, persist, and fade away. This is the wisdom that meditation provides.

Pairing an increased understanding of our deluded minds with a constant effort to keep the ultimate goal of nirvana in mind, we begin to realize how we should approach the situations in which the precepts fail. This realization shows us that these precepts should not be held as law but rather regarded as guidelines informed by meditative insight. In the Digha Nikaya, the Buddha explains that “from the observing of the moralities comes wisdom and from the observing of wisdom comes morality… It is just as if one should wash one hand with the other… exactly so is morality washed round with wisdom and wisdom with morality.” Morality is the list of precepts, but this alone is not enough. For true skillful action, one must also have the wisdom to know how to apply these precepts.

After a certain point in practice, wisdom will not only act as a guide for the precepts but will replace them altogether. Just as a master chess player abandons firm strategic rules and acts from skilled insight, so too does the experienced practitioner. The precepts, just like training wheels on a bike, are an important means of guidance but are not an end in themselves—once we learn how to balance, we get rid of them. Keeping them after the fact would be ridiculous. Just imagine the reactions Lance Armstrong would have gotten if he raced the Tour de France with training wheels!  Similarly, once we learn how to balance ourselves morally, we can abandon the precepts as strict rules and use them only when appropriate. This was the approach Gautama espoused for the entirety of his teachings. He told us that the dharma should be used like a raft to aid on our journey. It is a tool that we can use to cross the tumultuous sea of samsara. Like any sailor making port, however, when we finally reach land we do not carry the ship with us. We leave it in the water. Once we reach the shores of nirvana, we need not keep the teachings as dogma. Instead, we let them go. We can certainly return to them if the need arises, just as we sometimes use our feet to help us balance when riding on a treacherous path. There comes a point, however, where we must take all of our practice out of the meditation hall and into the real world—take off our training wheels, let go of the rules and try to apply the wisdom we have gained through practice into everyday life.

Zachary Bremmer writes about the intersection of Buddhist meditation, philosophy, and the happiness of everyday life.