When I was putting together the anthology Buddha’s Daughters: Teachings from Women Who Are Shaping Buddhism in the West, Judy Lief was one of the first teachers I thought to include, as her teachings are some of today’s most remarkably insightful, relatable, and also just plain enjoyable. 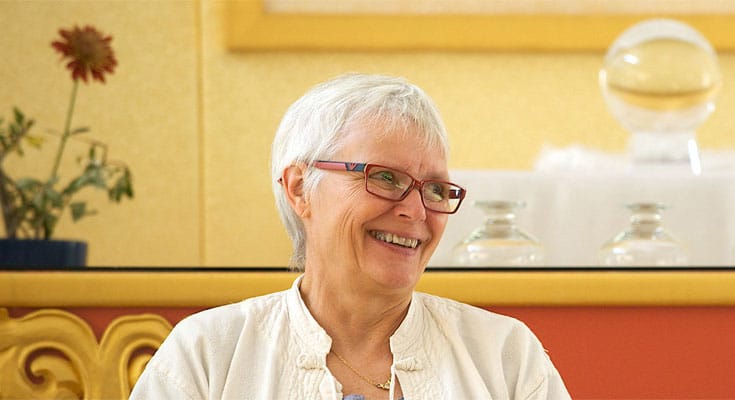 A frequent contributor to the Lion’s Roar, Lief is the author of Making Friends with Death and the editor of The Profound Treasury of the Ocean of Dharma. Recently, I had the good fortune to interview her. –Andrea Miller

Miller: In the Buddhist community, there are some people—mostly men from what I’ve encountered—that don’t want to address gender inequality because they believe that gender isn’t real, it’s empty.

Lief: That’s the stamp of privilege. Privileged people are blind. Have you watched Upstairs Downstairs, which depicts the elite and the servants? The elite know nothing about the servants. The servants know everything about the elite. When you have a lot of privilege—and people have different kinds of privilege, gender is just one—you tend to be blinded by that. That whole thing of “it’s all one” and “gender is irrelevant” is confusing ultimate and relative truth. There’s ultimate reality, but that doesn’t mean you don’t pay your bills or go to work.

In terms of the Tibetan tradition, your root guru is the one who opens the doorway to open your heart to all the great teachings that you can receive in Buddhism. Actually, your root guru opens you to be able to appreciate and benefit from teachings from great teachers from all sorts of different traditions and even non-traditions.

Did you ever feel a longing for a female teacher?

I never felt the urge to seek out any teacher, male or female! I don’t believe things are accidental, but in my case it seemed that way. I just sort of met this person that seemed to be telling it like it is. It was the kind of speech that had no hooks involved, nothing that felt manipulative. He was just laying it out. In fact, I think that when I first connected with Trungpa Rinpoche that I didn’t even view him as a Buddhist. I just thought he was someone who was going to tell the truth.

I understand you were recently involved with initiating a gathering in New York of about twenty-five women Buddhist teachers from various sanghas, and that the purpose of this gathering was to talk about fostering a younger generation of women teachers.

A lot of teachers in their forties, fifties, and sixties are really concerned about how to encourage young women to step forward into teaching roles. It’s been our observation that young men are much more confident, even much more apt to overreach themselves in becoming Buddhist teachers, while young women are more hesitant in this regard. They need encouragement. And I can relate to that because I was really pushed into teaching by the Vidyadhara. I had no interest in doing it. When he first asked me to give a talk, which was not that long after I started studying the dharma, I had to give it with him watching. I was so scared that I was throwing up. It turned out to be a really good teaching for me—to force myself to do something when I was that frightened. But, I would never have stepped forward without encouragement, and that’s true for a lot of women.

How do we encourage more young women to become teachers?

Lief: At the gathering, we talked about all sort of possibilities, like women teachers taking on younger apprentices and trying to get them some experience. I think the main thing is, in every sangha the authorities or the people who are looked up to should be looking for talent, for people that need a little push. It doesn’t necessarily just have to be women. We can put emphasis on trying to have the newer people get some exposure in leading discussion groups and giving the talks.

Why is it important to have female dharma teachers, not just male?

Lief: Women’s experience is different than men’s. There’s a huge overlap, obviously, within the humanity of the experiences of suffering and compassion and meditation practice, etc. But just at the ordinary daily life level, there are many aspects of women’s experience that men don’t get and I’m sure it works the other way around. So I think, just as half the population, it’d be nice to have women’s wisdom entered into the mix and honored.

If you look back historically at Buddhist traditions as well as pretty much any other religious tradition, the energy is heavily male, so much so that it’s lopsided and actually missing something. So this is a period in history when it’s possible to try to shift things in a more fair and balanced direction. But we’re working against a lot of entrenched preconceptions of women as inferior.

When women and the dharma come up in discussion, there’s often a focus on sexual assault and abuse by teachers. What can and should be done about this abuse?

Sanghas should have some kind of policy or way of addressing these issues and bringing them to light. But it’s tricky to define what is proper sexual ethics, and there’s a fine line between trying to create asexual communities and making the distinction between what is sexual misconduct and what is simply human sexuality. So it’s important not to get on a high horse. Sexuality can be a very positive thing on a spiritual path.