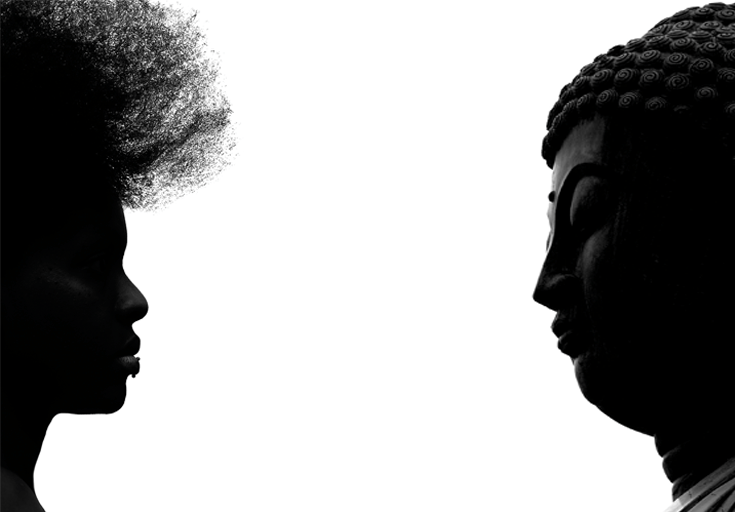 I am a person of African descent practicing Buddhism in the age of #BlackLivesMatter. I am also trained in the Insight Meditation tradition to organize and lead Buddhist sanghas.

Most of the work I do is in pastoral counseling. My challenge is how to present the Buddhist teachings in a way that is culturally relevant to African Americans, who are acutely aware of the precariousness of their lives. The conclusion I have come to is that Buddhists need to connect African Americans to a larger story than the Buddha’s individual liberation, one that is relevant and inspires them to advocate for their lives in the #BlackLivesMatter age.

Let’s look at one Buddha story that is culturally irrelevant for most African Americans today.

Siddhartha was born into a wealthy family. Most African Americans are not wealthy; in fact, many of us are poor due to generations of impoverishment created by wealthy people.

Siddhartha’s father protected him from knowing about the countless ways people suffer. African Americans are not protected from the suffering of economic disparities, racism, violence, injustice, mass incarceration, rape, lack of nutrition, and illness.

Siddhartha, at age sixteen, twenty-one, or some other youthful age, was shocked when he saw that people actually got sick, old, and died. African Americans encounter death well before they become teenagers and young adults. In fact, many die when they are teenagers.

Many African Americans, despite a history of being enslaved with the help of Christian principles of the day (The land and its inhabitants are mine because God willed it), came to relate to the exodus and other liberation stories of the Hebrew scriptures. These myths were initially forced on African American slaves but became a means through which the slaves, and their descendants, moved together toward physical freedom.

If the suttas were taught so that African Americans could hear the story of that communal trek to spiritual freedom, they would speak to us in a way that is culturally relevant.

The Buddhist suttas, in my experience, are not taught in ways that emphasize the communal spiritual liberation that is implicit in the story of monks following the Buddha from grove to grove, adding monastics and householders along the way. If the suttas were taught so that African Americans could hear the story of that communal trek to spiritual freedom, they would speak to us in a way that is culturally relevant.

For our survival, we need inspiration that reminds us we can only survive together, not through individual awakenings alone. Fortunately, there is mythical material in the Buddhist suttas that offers us that inspiration.

In the traditional story, it is said that Siddhartha’s father protected him from seeing people who were ill, getting older, or had died. But even if his father tried to protect Siddhartha from seeing the real condition of humans, he could not have avoided awareness of his own aging process, especially during the tumultuous adolescent years. How likely is it that child mortality rates in ancient India were so low that Siddhartha was untouched by his playmates dying?

As Siddhartha was getting older, so was his father. Was he unable to see that? Siddhartha’s wife got pregnant and her stomach grew in size. She gave birth and their son aged. Surely Siddhartha would have noticed the truth of birth. And she could not have been the only pregnant woman Siddhartha saw, or did his father have all pregnant women removed from the village?

Because this particular Buddha story has the absence of logic and the presence of magic, it contains mythological elements. As we reflect on this, we are lifted from a limited (though necessary) scientific consciousness into, as religious philosopher Jean Gebser put it, a redemptive mythical consciousness. This makes space for a more culturally relevant story.

Imagine Siddhartha is a person who has been protected by his loved ones from the reality of racism. He leaves his protected compound, perhaps a community gated specifically to separate itself from undesired people. He enters a place where he sees darker-skinned, unarmed people being shot dead by the police or perhaps by guards who serve to protect his enclosed community. Maybe he encounters darker-skinned people who are sicker and more malnourished than lighter-skinned people.

Sometime after birth, ignorance, anxiety, and aggression begin to form our perspectives.

What if Siddhartha saw that? Would he seek refuge in the forest to avoid a similar fate or would he remain in the situation? Would his response depend on how he saw the color of his own skin in relation to those who were being shot dead or becoming ill and dying? This is a question I would ask all dharma practitioners to reflect on.

In this new story, what noble truths arise when Siddhartha sees the suffering of racism?

Siddhartha’s first truth could be “People, including loved ones, try to protect you from the truth of other people’s harmful delusions.” The truth of racism is too much to bear early in life, so being deluded early on is an experience many of us share.

A second truth could be “There is racism.” Why is there racism? According to Gebser, humans are born into a state of “aperspectivalness.” To put it another way, they are born without a perspective. Then, sometime after birth, ignorance, anxiety, and aggression begin to form our perspectives. Racism is a manifestation of ill-formed perspective-making processes.

Siddhartha’s third truth could be “I am impacted by racism.” Racism hurts the heart, as well as the ways it impacts people on a physical level.

A fourth truth could be “There is no refuge from racism.” Yes, one can experience temporary relief from others’ attacks, but racism still remains. Emerging from that “refuge” is a setup for the suffering that occurs when the reality of racism is inevitably faced again.

A fifth truth could be “This suffering I feel is felt by those who look like me.” It is this truth that begins to reconnect us with others.

A myth-infused recasting of the Buddha’s story for African Americans in the #BlackLivesMatter age can be a story of cultivating confidence. This is not the confidence that looks like narcissism, but the confidence that feels like being with others through love. Being with others through love to collectively transform our suffering could even be a ninth step in the Buddha’s noble path, with confidence as an eleventh transcendent perfection.

Being connected with others in liberation from suffering is part of the African-American experience and the legacy we give this world. Prior to the Civil Rights movement of the 1960s, Civil Rights leaders, predominantly Christians, took inspiration from Jewish and Christian stories and mythology. Today, #BlackLivesMatter takes inspiration from the Black Civil Rights movement, Black feminist lesbian poet Audre Lorde, and post-Black Civil Rights movements, including the AIDS-awareness activist organization Act Up! and anti-capitalist-greed movement Occupy Wall Street. We no longer need ancient myths to advocate for our lives; we can utilize mythology, history, and present-moment collective suffering to determine what kind of advocacy we engage in.

If we can remember that the transformation of suffering is a communal and collective endeavor, we can seek temporary refuge from the pain of racism for refueling purposes, but not for the illusion of safety.

We can reflect on the ways the Buddha taught his followers to address people who slandered and physically attacked monks, as #BlackLivesMatters activists are being attacked. If you’re slandered, question the veracity of the slanderer without the intention to harm them and tell the truth without attempting to force others to accept your truth. If you’re physically attacked, tell the attacker to stop, renounce any intention to hurt the attacker, protect yourself, and remind your attacker of the goodness within them in order to help them transform their ignorance, anxiety, and aggression.

If we can remember that the transformation of suffering is a communal and collective endeavor, we can seek temporary refuge from the pain of racism for refueling purposes, but not for the illusion of safety. There is no absolute safety, as Siddhartha discovered, only relative moments of painlessness. This reality can inspire us to think about how we can tell the Buddha story in culturally relevant ways to other targeted populations.

Syrian refugees in the U.S. are being set up for years of suspicion because they have come to this country at an unfortunate time in U.S. politics. What Buddha story will we tell them? How will they cultivate confidence to rebuild their country post Bashar al-Assad? Can Buddhism be relevant to that enterprise?

Many girls and women throughout the world are sold into sexual slavery. Their suffering is shared. What Buddha story will we tell them to help them build confidence that they are respectable?

If we stick to telling the Buddha story we have always been told, we will continue to tell a story that is not relevant to the suffering of many people. What is the point of that? Let us dwell in the spaces in the Buddha story where there is no reason and no logic. Let us dwell in the spaces where magic appears. Let us think about the various ways people suffer and allow ourselves to be more culturally competent and creative in how we share the Buddhist teachings.

Let’s continue to support daily meditation practice, loving-kindness practices, and meditation retreats as a way of life. For an oppressed and invisibilized population, this contemplative and heart-centered way of life cultivates a remarkable relational resilience. A remarkable relational resilience, I have learned from my study of African-American lesbians in the Insight Meditation tradition, is what helps oppressed people persevere in the midst of ongoing multilayered assaults. Culturally competent dharma can only inspire invisibilized people to become relationally resilient.