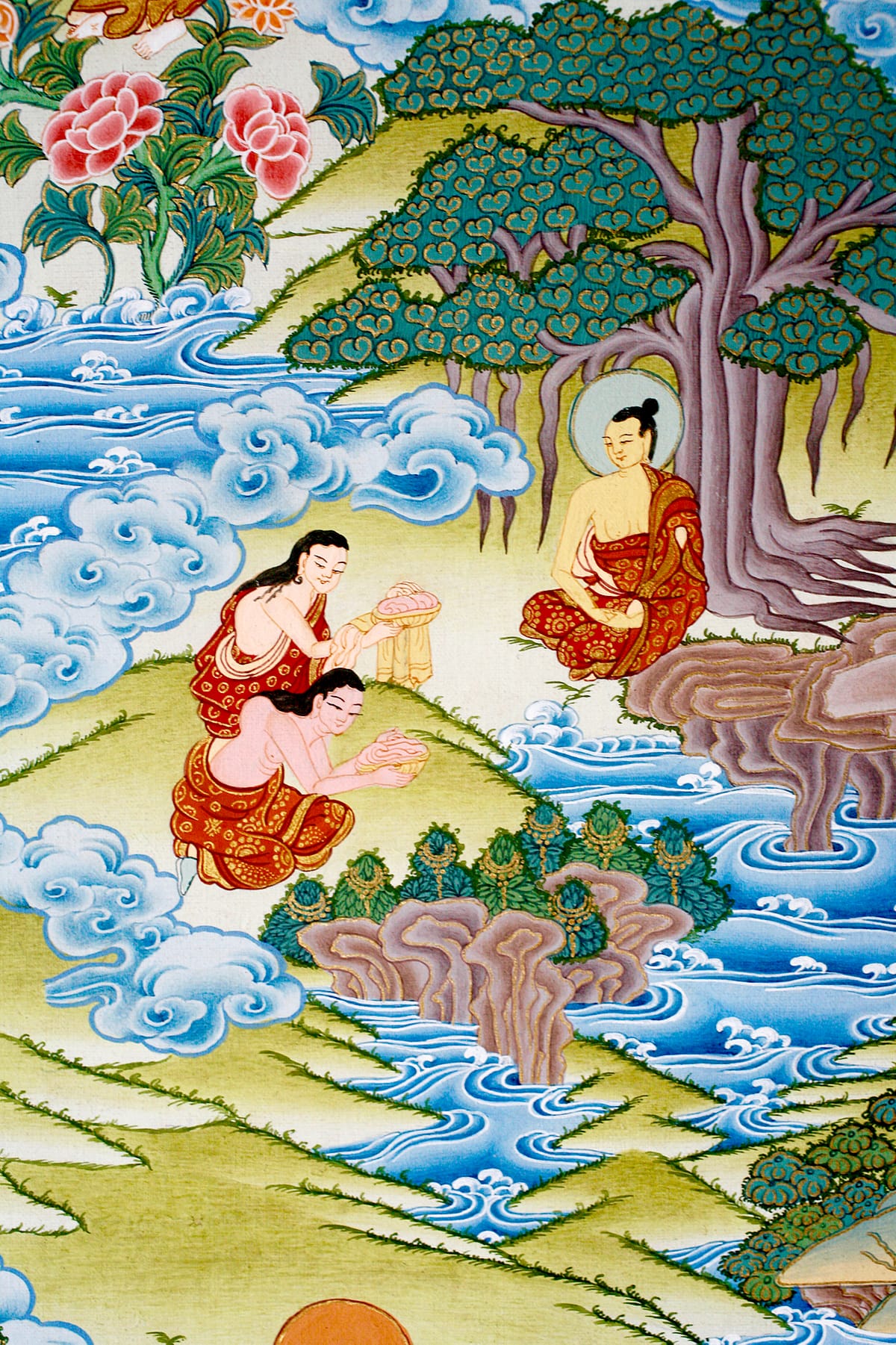 Buddhism isn’t about depriving yourself of worldly pleasures. Andrea Miller explains how a good meal helped Siddhartha understand the importance of nourishment — and offers a healthful recipe for cashew pulao.

The Buddha taught that the gift of food is fivefold; it is the gift of life, beauty, happiness, strength, and discernment. It’s worth noting that Buddhism itself began with the gift of a good meal.

Growing up Siddhartha was sheltered within the luxurious confines of his family’s palaces and given everything he could possibly want or need. But then, at age twenty-nine, he got a glimpse of the world his father had always tried to protect him from. He saw—for the very first time—old age, disease, and death and learned that this degeneration was the inescapable human condition. Siddhartha was shocked. How could everyone just go about their lives, seeking pointless pleasures, as if this shadow wasn’t hanging over them?

In the middle of the night, Siddhartha slipped away, leaving his royal life behind, and he became an ascetic. Rigidly practicing meditation, he held his breath for long, dangerous periods of time and ate nothing but a grain of rice a day.

Siddhartha grew skeletal and weak. Finally, he realized this self-mortification was going to kill him, not lead to enlightenment, and that what was actually needed to advance spiritually was a middle way, neither sensual indulgence nor harsh austerities.

In light of Sujata’s offering, I am writing this post—the first in a new series focusing on the intersection of Buddhism and food. Called “When the Buddha Comes for Dinner,” this series will feature interviews, recipes, Buddhist history, lore, and teachings, and much more.

For now, I offer you this recipe for cashew pulao. What happens if you make a batch, nourish yourself, and find a tree to sit under?

Rinse the rice under cold water, drain, and soak in cold water for thirty minutes. Meanwhile, heat two tablespoons of the butter or ghee in a frying pan. Fry the cashews until they’re golden brown, then remove them with a slotted spoon. Next, in the same pan with the same butter or ghee, fry the onions—stirring frequently—until they caramelize and are deep brown.

Heat the remaining tablespoon of butter or ghee in a heavy-bottomed pot. Add the cinnamon, peppercorns, cardamom, and cloves, and allow them to sizzle for a minute. Mix in the rice and fry until it’s lightly browned. Add the salt, saffron, and stock. Bring to a boil. Cover the pot and reduce the heat to low. Cook for fifteen minutes.

Remove the pot from the heat and allow it to sit for ten minutes. Lastly, fluff the rice with a fork and gently stir in the cashews, currants, and onions.