Since 2002, the monks from Samorang Pagoda in Cambodia have protected a 71-square-mile tract of forest from illegal logging and hunting. 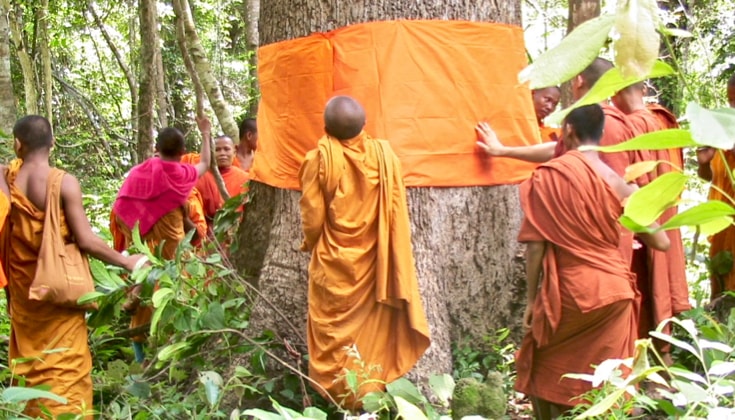 Photos by Chantal Elkin, via the Alliance of Religion and Conservation on Flickr.

Buddhist monks are helping to protect a large swath of forest in Cambodia, says a new profile from the Thomson Reuters Foundation. The Monks Community Forest (MCF) site covers 71 square miles of land in northeastern Cambodia. Six villages of approximately 4,000 people use the forest, making it the largest community-managed conservation site in Cambodia.

The main purpose of the Monks Community Forest is to protect the forest from deforestation and maintain biodiversity in the region. Monks from Samorang Pagoda and volunteer villagers patrol the protected areas unarmed to discourage illegal hunting and logging. Monks also wrap the trunks of the oldest and largest trees in the forest in saffron robes during tree ordination ceremonies. According to a report by the United Nations Development Program, “To cut down a tree or hunt wildlife within the ordained forest is considered as serious as harming a monk.” 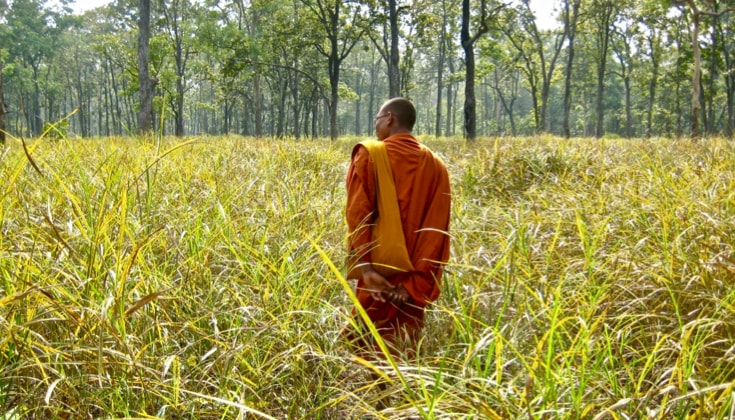 The forest is home to populations of at-risk species in the forest, such as the sun bear, gibbon, leopard, and pangolin, which depend on the dense evergreen and semi-evergreen forest for protection. Since the early 2000s, industry and foreign investment in Cambodia have resulted in rapid deforestation. While protected forest areas were established by the government, illegal logging and hunting continue to damage the vulnerable forests. The monks have worked with local populations since 2002 to increase stewardship for the land. The monks also encourage villagers to use traditional forms of fishing and gathering to support sustainable environmental practices. Villagers can sell any resources they gather in local markets, providing them with additional income.

The project was awarded the Equator Prize in 2012 for outstanding community involvement in reduction of poverty and sustainable use of biodiversity. Chantal Elkin, the director at the non-profit organization Alliance for Religions and Conservation, says that by using their religious authority, the monks create lasting conservation impacts. She told the Thomson Reuters Foundation, “[The monks] are doing the work with not much money or government help. But they are effective because they speak to people’s value systems — which are tied to their religious beliefs, and that’s how behavior changes.” Approximately 95% of the population in Cambodia identifies as Theravada Buddhist. Monks are strongly engaged in Cambodian society both as educational and social leaders.