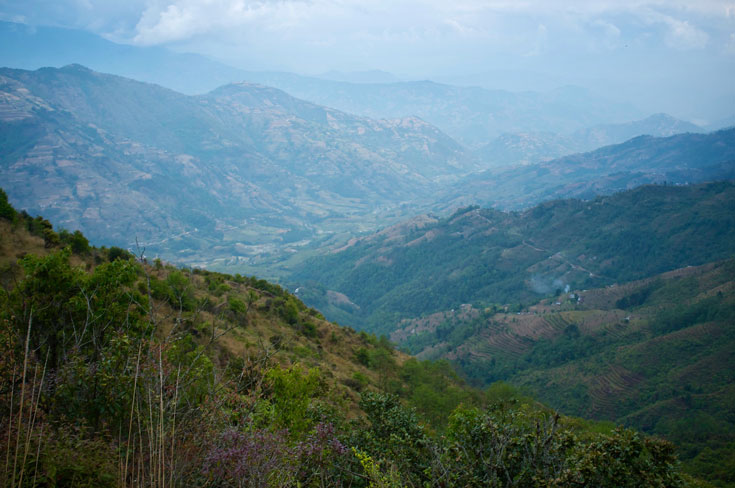 As I find myself staring into the horizon, for a moment it feels like time has stopped. I recognize the sea of endless green, the hills, the valleys, the mountains meeting the sky, and the river that cuts through them. An overwhelming feeling of familiarity takes over, and for a moment I forget where I am. For a moment, I am back home, or at least where home once was, halfway across the world, in the Andean mountain ranges.

“Is everything ok?” David asks.

A woman wearing a colorful kurta with a baby on her back passes by, and I’m instantly reminded of where I am. The mountains in front of me are not the Andes, lush with coffee and sugar cane, but instead home to tea and rice terraces. I’m standing in the Kathmandu Valley, surrounded by the Himalayas.

It takes me a second to verbalize what I just experienced, and even then, I’m not sure I can. How can I explain that I completely recognize the landscape that lays before me, when it’s my first time seeing it? I tell him about my hometown, and how its landscapes look almost exactly the same. For a second I doubt my memory of the landscapes impressed in the back of my eyelids. But I’m sure I’ve seen them before.

Almost ten years later, I dig through my archives to find the photo I took that day, as well as the one I took when I went back to Colombia years later. The similarity is uncanny.

Who I am, how I see myself and how others see me, is always changing.

Many talk about the feeling of “coming home” when they visit Nepal or India for the first time, and I too felt that way. It was a recognition of the familiar amongst the foreign — the foreign yet to become familiar. In retrospect, that trip to Nepal and that experience was, in a way, the beginning of the merging of my different identities.  It was a coming home to myself.

Who I am, had always been conditioned by who was asking the question. I am a Latina. A Colombian. A professor of religion. A meditator. A Buddhist. A retreat practitioner. A wife. A mother. The list goes on. However, it always felt as if when I was one of those, I was not the others. As if my different identities were in conflict with each other.

I arrived in Nepal as a scholar of religion, studying Buddhism from an academic perspective, soon to become a student of Buddhism, a practitioner. This was the first of my self-perceived identity conflicts around Buddhism. I was either a scholar of Buddhism, or I was a practitioner — I could not be both. It took many years and much exploration before I felt comfortable calling myself a Buddhist, and even longer before I would disclose it to others. 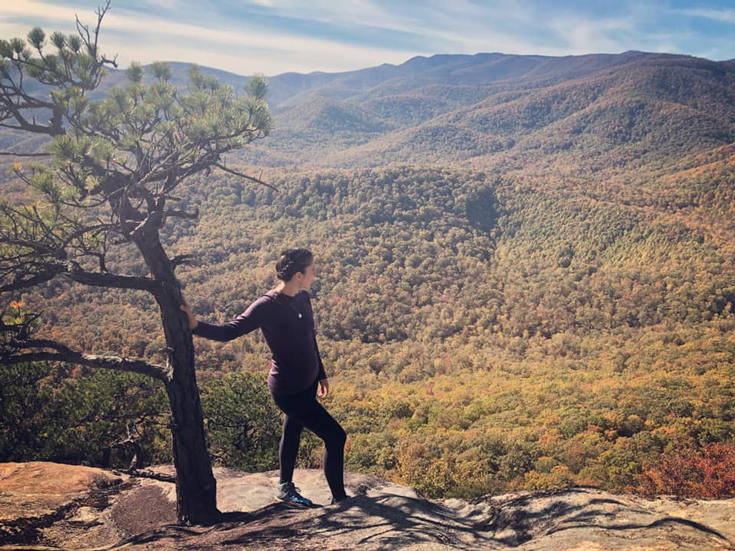 Prior to my trip to Nepal, I had never met a Latinx Buddhist. I had never even heard of Buddhism growing up in Colombia. This led to an unspoken understanding that to be Colombian was to be not-Buddhist. As I became more Buddhist, I felt as if those around me perceived me as becoming less Colombian, as if I was choosing my Buddhist identity over my Colombian identity. As I stepped myself deeper into Buddhism, I somehow grabbed onto the foreign cultural items that felt familiar to me and my own cultural background. I started to see myself reflected in the different aspects of my Buddhist identity, and the cultures that were home to it. I wore juttis (Indian shoes) instead of alpargatas (traditional Colombian shoes). I wore kurtas, sarees and lehengas, not faldas chapoleras. I traded tintos and bandeja paisa for chai and thalis.

I remember conversations where I talked about how I felt at home in India and Nepal, and how I felt so foreign and “other” when I traveled to Colombia. Visiting my hometown, people would often comment how my accent wasn’t quite right, how the way I dressed was not the way I was supposed to, how my interests were not what was expected.  Identifying as a Buddhist was a heavy responsibility. I felt as if I was a spokesperson for Buddhism. I was often put in a position where I had to defend Buddhist traditions and practices that were so foreign and easily misunderstood to my family members. It was easier to keep things separate — to put forth the identity that was most familiar to a particular context.

As I became steeped in the Buddhist tradition, another kind of dichotomy emerged. Practicing in a heavily monastic Tibetan Buddhist lineage, which championed contemplative retreat, there was little room for anything else. A dedicated practitioner was one whose life revolved around practice, and who made an effort to weed out anything that might get in the way of a contemplative lifestyle. The goal was long term retreat and ideally monasticism. Relationships, family, and children were all seen as obstacles and attachments. My dreams of becoming a mother, in this context, were at odds with my Buddhist path — or so it seemed. I am now a mother and a wife, and while my practice looks different these days, it is as valuable, and provides me with just as much insight, as my time in solitary retreat.

As I step into the role of a Buddhist/meditation teacher of a Latinx/Spanish language sangha, I am being called to embody all these different facets of my identity. It is through all these different intersections of my identity that I am able to communicate the dharma from a place of authenticity. Identity is an ever changing process of integration. Who I am, how I see myself and how others see me, is always changing. Self-perception is not fixed, it’s fluid. Giving myself this type of flexibility and fluidity has allowed me to recognize and integrate parts of myself I previously perceived as being in conflict with each other, keeping my experiences compartmentalized. Integrating, merging, and bringing my different experiences together allows me to share from a place of authenticity.

Ultimate truth, according to Shantideva, is the truth of a lack of inherent existence in any and all phenomena (read: identities). Relative truth is the infinite appearances that are shifting, changing, contradicting, and evolving. The middle way is not to choose one over the other, but to see both sides of the same coin.

Looking at the horizon, once again recognizing the foreign landscape before me, it is the Appalachian mountains which I now call home.

Mariana Restrepo is an associate editor at Lion’s Roar. She is Colombian with a Nyingma-Kagyu Tibetan Buddhist background, has an MA in Religious Studies and currently lives in the Appalachian Mountains with her husband and young son.