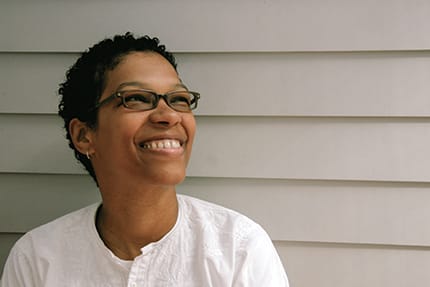 As she receives ordination into the Soto Zen school of Buddhism, angel Kyodo williams reflects on her path to acceptance within this lineage.

By the time this article reaches you, I will have been empowered as an independent teacher in the Zen tradition through a ceremony and process called dharma transmission. While Zen has flourished in the West long enough to bear witness to the passing of pioneering teachers who have, in turn, seeded a substantial network of second- and third-generation teachers in America, my own rite of passage remains noteworthy for dubious reasons. As the second African-American woman—and only the third black person in America—ever to receive this empowerment in Soto Zen Buddhism, I am acutely aware of the conflicting viewpoints with which I hold it.

Arising out of the cultural needs and priorities of seventh-century China, the Zen school places significant emphasis on mind-to-mind transmission. The transmission ceremony affirms one as a successor in a lineage reputed to be unbroken from the historic Buddha to Mahakashyapa in India, through to Bodhidharma and Huineng in China, to Dogen in Japan, and in my case, Taizan Maezumi Roshi and Bernie Glassman Roshi in America. One of the essential rites of this passage is to hand copy and receive back a stamped bloodline document that traces this lineage in a chart of swirling lines ending with your own name, effectively “sealing” one’s authentic place of belonging in this eighty-plus-generation family.

While it has long been established by scholars that the lineage as written couldn’t possibly be historically accurate and therefore literally true, any teacher undertaking the ceremony would be hard-pressed to deny that a mysterious and visceral comfort attends the affirmation of one’s belonging, regardless of its being symbolic and maybe even precisely because it is.

In this way, I am no exception. After ten years of mostly avoiding the Buddhist mainstream while dealing with the demands of starting up a small dharma community and being a full-time residential teacher, I had become accustomed to going it alone. The public acknowledgement of what one already is, what is already so, is very much like getting married to a long-held beloved: at the end of the ceremony, you return to the place you’ve always lived, but now it is truly your home.

Still, I observe any system of perpetuating a special transmission with the wary eye of a justice-seeking person who has existed in a multiplicity of categories that are famously marginalized in America: black, female, queer, working class, non-degreed, and under-resourced. It doesn’t take deep analysis to recognize that inherent in the tradition passed through this lineage are handy tools for keeping in place the structures that hinder healthy diversity because of the unwelcoming conditions that exist when black folks and other people of color find themselves trying to pierce the veil of all-whiteness we still find in the vast majority of convert dharma centers. This transmission system—different from formal participation and merit-based curricula such as the Community Dharma Leaders program offered through Spirit Rock—also has embedded within it the potential to foster, then obscure, discrimination under the guise of authenticity.

To this end, when establishing the New Dharma Community as a home for people committed to deep practice of the dharma and also to deep change for a more equitable and just society, we took up the story of the historic Buddha touching the earth in the bhumisparsha mudra, facing down the darkness of Mara, as our symbolic transmission. In doing so, we affirm our belonging to the lineage of awakening that precedes even the historical Buddha, much less that of white teachers who have withheld such belonging, if for no other reason than because the dullness of their unexamined privilege has prevented them from being able to see those who are unlike them.

Mara challenged Gautama’s right to ascend the seat of enlightenment, just as the dominant white paradigm showers arrows of comparison that challenge the culture, beliefs, and ways of other people, viewing them as inferior to their own. While many people wish to paint over the blight of racism that permeates the Buddhist community by casting it under the rug of a misguided fixation on identity, it was the Buddha himself who expressed an awareness of the need to address race, caste, gender, and class oppression by modeling the path to liberation. In reaching down and touching the earth, the Buddha of that time, and all of the buddhas who follow his radical example, are witnessed by the earth itself and join a sacred, timeless, and unshakeable lineage of liberation—one that is evidenced both inside and out. The earth shudders in approval.

I will continue to view the mantle of being an “authenticated” teacher with equal parts wariness and humility, as yet uncertain about whether it is best to crash the “sameness” party with healthy doses of difference or if it is of greater service to simply remain on the outside. To paraphrase Martin Luther King, Jr., “I may not stay here with you.” But no matter my personal choice, it seems the challenge established by the virtues of wisdom and compassion, and the very integrity in our practice—not to mention the radically changing world we are in that clamors for true justice—demands that the greater Buddhist sangha vigorously and wholeheartedly takes up the question. If we do not, the powerfully persuasive draw of these ancient teachings will be overwhelmed by the deep misalignment of racism and oppression. But if we do, our collective transmission will be that much more radiant, powerful, and true.