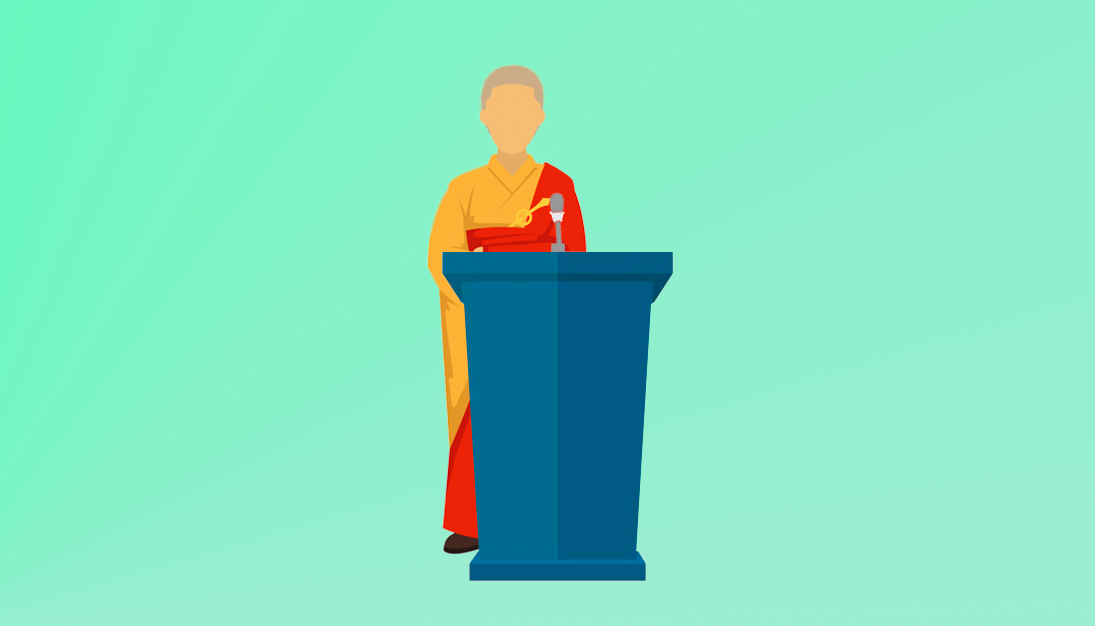 It was 2005. Four years had passed since 9/11, and I was in my second year of law school. The War on Terror was in full fury. Iraq was burning. And President George W. Bush had declared war on civil liberties in the Land of the Free.

It was around this time that I began thinking of politics and international affairs from a Buddhist perspective. I’d read Locke, Rousseau, and Mill during my undergraduate degree in Political Science, but what really commanded my attention during those years was Buddhist Philosophy. As much as I had read on the subject, however, I struggled to find much that was original or consistently Buddhist in my readings of political philosophy.

Based on my studies of Buddhism, law, and politics, I would propose the following four key components of a prospective Buddhist political philosophy.

First, politics in Buddhist political philosophy would be understood in terms of the Buddhist view of existence. According to that view, all existence — individual and collective — is imperfect. All societies and communities are subject to change, conditioned by many interdependent, interrelated factors.

This contrasts with the positivist view in modern Western political philosophy. The positivist view is a secular and rational view of the world that says that all things in the world can be observed factually without resorting to explanations of first or “ultimate” causes like God or nature. In law and politics, positivism says that the sovereign (i.e. the ruler, government) is the source of all political authority without having to refer to any natural law that exists independently or above such authority.

The problem with positivism is that it reduces politics to a mere function of power without considering any higher principles, such as morality. Nazi Germany is an extreme example of the consequences of the positivist way of thinking. When the Third Reich declared that it was legal to discriminate against German Jews, Germany disregarded whether the Jews were subject to any higher law such as the natural rights of a human being.

From the Buddhist point of view, a political philosophy that ignores the natural law and disregards principles like the interdependence and unity of life would only harm individuals and communities. To illustrate this further, consider these principles in light of the Buddhist idea of non-self.

Buddhism teaches that whenever we identify with a self-contained entity like a particular class, nation or religion, we impose or project a static “self” onto an otherwise dynamic and fluid world and create suffering. The separation between “self” and all that is not “self” creates resistances, conflict, tension, discord, and disharmony. Thoughts, words or actions which ignore this natural law create dukkha.

In this way, we can see how a political philosophy that disregards natural law in the form of such principles as interdependence and the unity of life can create suffering.

Second, in Buddhist political philosophy, politics would be a moral undertaking for any leader. By contrast, most modern Western political philosophies construe politics as “morally neutral” based purely on a leader’s utilitarian considerations of power and public good.

In Buddhism, to flourish is to live in accordance with the universal moral law known as dharma. To paraphrase Damien Keown, living in accordance with dharma and implementing its requirements (outlined in the Buddha’s Eightfold Path) leads to happiness and fulfillment among individuals and communities; neglecting or violating dharma leads to suffering.

The importance of morality in politics is illustrated in Buddhist philosophical literature. In the Anguttara Nikaya, the Buddha stresses the importance of giving, right speech, beneficial conduct, and impartiality (the sangahavatthu or ‘four means of support’) as the basis for building a healthy community.

Modern Western political science also analyzes the causes of phenomena, but these causes are usually analyzed individually, in isolation from other possible causes. For instance, racism may be explained variously due to lacking education, interaction between different ethnic groups, or government policy on multiculturalism. A Buddhist political philosophy, applying the theory of karma, would suggest that all these causes and conditions play a role in the rise of racism.

This Buddhist theory of karma would also help explain how societies change over time. For instance, the election of Donald Trump would be explained historically as an example of different causes and conditions working together: a particular political system (the two-party system, the American electoral college), a particular society (which has experienced economic recession and the decline of the middle class since 9/11) and a particular culture (which celebrates social media celebrities). In this way, the theory of karma would explain history based on the Buddhist view of existence.

Fourth, a Buddhist political philosophy would have a distinctive conception of the human good and the means by which it would be attained. Buddhism is concerned with enabling individuals and societies to realize their capacity for happiness and goodness through wisdom, morality, and diligence. Its political philosophy therefore would seek to create a politics (whether Democrat or Republican, Liberal or Conservative) that alleviates the distress of the people through morally skillful means, rather than pandering to their greed, hatred, and delusion.

We have reached a point in the West where we risk losing our sanity and stability as a civilization in a world seething with greed, hatred, and delusion. I have presented a Buddhist political philosophy here as just one way of thinking differently about politics and international affairs in this situation. A Buddhist political philosophy would explain how and why we got here based on our human impulses, but it would also offer the same glimmer of hope offered by the Dharma: that we flourish individually and collectively when we awaken to our basic capacity to embrace and live in accordance with things as they truly are.

Randeep Purewall is a lawyer and a writer. He has studied Buddhism for over twenty years and graduated with a master’s degree in Politics and International Studies from the School of Oriental and African Studies. He lives in Vancouver, Canada.