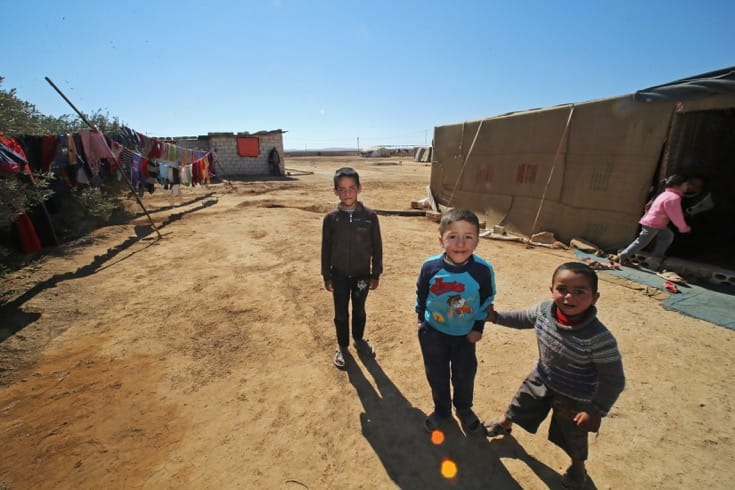 Syrian children playing outside of their refugee camp in Jordan. .

Now that Donald Trump has all but scuttled his chances to win, we can expect Secretary of State Hillary Clinton to take her seat in the Oval Office come this January. As far as the refugees of the Syrian Civil War are concerned, that means that America is soon to see a 550 percent increase in the amount of them coming to our country – as Trump accurately stated in a recent speech attacking Hillary Clinton. (Though he also said she plans to do so without a screening plan, which is completely inaccurate.)

They need our help. And as I periodically check my Facebook feed from my current posting in Liberia, West Africa, I can see the panic this is causing in many Americans. Being an American abroad who has worked closely with Syrian refugees after arriving in Europe, as well as many other vulnerable populations, I want to share my thoughts on this.

One lesson I have learned in observing America’s reactions from afar is that fear of the unknown, and misrepresentation in the news, breeds more and more fear — to the point where it becomes irrational. This fear then breeds hatred of the other, from the other, which together almost always leads to violence.

If we do not want to bring violence onto our own soil, then we Americans need to open our hearts. It won’t be letting Syrian refugees into our country that causes the violence so many are afraid of. It will be because we let 65,000 Syrian refugees into a country where many of its citizens have closed their hearts and minds to the Syrian plight.

On social media, I’ve seen Americans writing things like, “I would welcome poor and starving African women and children into our country but not these Syrians who have smartphones and only want to cause us harm.” Such a misunderstanding exemplifies how little we Americans know about current crises in the world. Here in West Africa, where I am writing this from, where I work with poor and starving African women and children every day – though they need a lot, they do not need to come to America. Syrians, on the other hand, do need to come to our country, for safety. They have smartphones, yes, because they are not poor nor are they claiming to be. This is something we as a country need to understand.

Here are five facts – one for every year of the Syrian Civil War so far – which might help to soften and open our hearts to the plight of the Syrian refugees:

Why are 4.5 million Syrians fleeing their country? Not because they want to, not because they are poor and want a better life in America, and not because they want to kill us. Syrians are fleeing their country in search of safety – they have lost enough family members and have seen enough tragedy that the best option for them is to put themselves and their families in small rubber dinghies packed to three times capacity, risking their lives to cross the Mediterranean Sea – praying not to end up like the 3,800 to lose their lives on that journey already this year.

This is the time it takes for a Syrian refugee to gain asylum in the United States — through an intensive screening process with very low chances of acceptance — versus the time it takes for any citizen from 30 European countries to get a three-month visa to the United States through the visa-waiver sharing program, which has very minimal screening procedures. As Evan Bonsall wrote  in “Are Syrian Refugees Really a Security Risk?”: “In a matter of months, a European citizen could travel to Syria, train with ISIS, travel back to Europe, and apply for an American visa. If successful, they would have 90 days to plan and carry out a terrorist attack on American soil.” That is a real concern. The United States government under the Obama administration has already begun addressing this, making the necessary changes under the Visa Waiver Program Improvement and Terrorist Travel Prevention Act of 2015 (the Act), which Hillary Clinton plans to continue if elected President.

That is the number of refugees resettled in America since 9/11. Of those 900,000, different numbers are circulating for the amount that have turned out to be a potential risk to our country, though no reliable news source reckons that there are more than 12. That is a .001 percent risk. Do those odds pose enough of a risk to turn our back to the 65,000 refugees soon to enter our country if Hillary Clinton takes office?

Knowing all that, and being confident in the strict vetting policy Hillary Clinton plans to continue to carry out, I would much rather welcome our new neighbors, letting their plight soften our hearts and grow our compassion, than live in an exaggerated state of fear, panic, and hatred.

I for one will be taking that advice – right into the voting booth.

Katie Letheren is a Buddhist American international aid worker currently working in the global health field in Liberia, West Africa. Born and raised in Manchester, New Hampshire, Katie attended New York University for her undergraduate degree in Political Science with a strong focus in journalism and the Middle East, and later attended Harvard School of Public Health’s Global Health Delivery Intensive program. Since then she has been bopping around the world with a cause - always letting the world’s events and the suffering it causes, no matter how painful it can be, soften her heart despite how badly it seems to want to harden it.