James Ismeal Ford on his time volunteering with the American Zen Teachers Association membership committee and its criteria for entry. 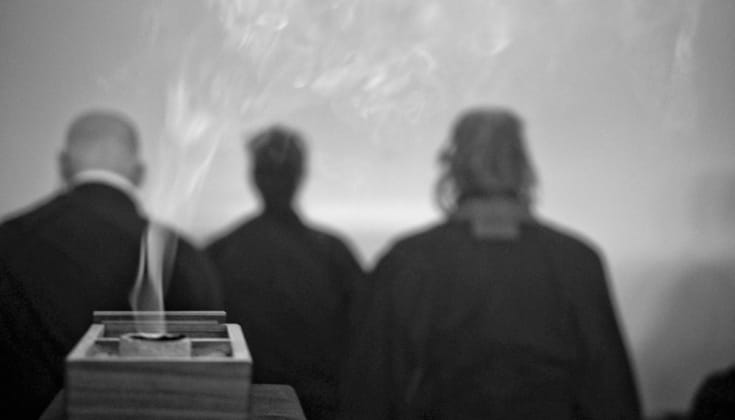 The American Zen Teachers Association is a pretty small organization, collects no dues, and has no professional staff. Volunteers take up the housekeeping work, mostly organizing the annual conference, maintaining the website, and sitting on the membership committee. By volunteer, I mean being asked with just enough Calvinist-style guilt hanging in the air to remind us how much Buddhism is informed by its host cultures.

I knew eventually my time would roll around and I would be asked to volunteer on the membership committee. When it happened it wasn’t as awful as I thought it might be. Still, it has its stresses. Among the more interesting, difficult and, frankly, thankless tasks for the committee is to ascertain whether an applicant would generally be recognized as a working Zen teacher by the existing membership, while at the same time resisting a drift into becoming some sort of credentialing agency. As it turns out, for the most part it’s pretty obvious who is in the club and who is not. But not always.

We figured out long ago that some kind of criteria needs to be written down or the process can easily degenerate into “Who do you know?” Still, as our tradition reminds us, it’s all one continuous mistake. So, there’s a fairly regular conversation about those criteria and who we’re missing in its current iteration. For example, at the end of August we voted Sallie Jiko Tisdale into membership. She’s a lay teacher authorized by the prominent Soto priest Kyogen Carlson. She’s been around a long time and done serious training, and the bottom line was that it was an easy “yes.”

But her application also raised for me how the current version of our AZTA’s written criteria assumes a significant monastic experience. And with that I found myself thinking about the phenomenon of lay leadership within the Zen mahasangha in the West. For those who visit Western Zen centers, the two most obvious differences between these centers and temples and monasteries in East Asia are the prominence of women and of lay teachers. In Sallie’s case that’s a twofer.

Within the world of Buddhism, the ordained sangha has traditionally been the guardian of the dharma. In most places this has been the Vinaya sangha established by the Buddha and his close associates. In Japan this is the bodhisattva priesthood, which became a distinct ordination model in 807. But whether monastic or priestly, leadership in most schools of Buddhism has been held unequivocally by the ordained.

However, the acknowledgment of the lay brother Huineng’s realization in the seventh century introduced dharma transmission rather than ordination as the critical factor for spiritual leadership among the Zen schools. In case 23 of the Wumenguan, one of the great collections of koan, the head monk Ming confronts the young Huineng and at the end of their exchange, declares, “Lay brother, you are now my teacher.” Huineng would later ordain, but the separation of ordination and transmission had been established. And with it a new vision of what matters most in the transmission of the dharma had appeared.

Still, as the normal rule was for the transmission to be handed on from monastic to monastic, in practice this distinction didn’t really mean much until the twentieth century when a number of teachers—Japanese, Korean, and Chinese—started giving dharma transmission to laypeople.

Today a significant number of Zen teachers in the West are not ordained as either Vinaya monks or nuns or within the Japanese bodhisattva priesthood. And exactly what this means has turned out to be quite unclear. On the face of it, perhaps it seems obvious. Dharma transmission is about the recognition of stepping away from self and other, of the direct realization of the fundamental matter. It also suggests confidence that the one acknowledged should be able to help others on their way to their own direct insight.

But it turns out when people gather together as spiritual communities, at least here in the West, they find they also want someone to fill ministerial functions, roles that were traditionally held by the ordained. The first practical question concerns jukai, or precepts ceremonies. At this point it seems that pretty much any sangha with lay leaders has simply gone ahead and had their lay teachers preside at the ceremony. And increasingly these lay leaders are performing weddings and conducting funerals and otherwise acting as ordained ministers.

The theoretical justification has tended to follow the need. A few are beginning to assert that dharma transmission contains within it the authorization to perform any ministerial function. This is a reversal of what some Soto clergy have held—that ordination contains within it dharma transmission. Some lay teachers are seeking ordination, after the fact of their transmission. Others are struggling to find new models for ministerial preparation and authorization.

So, back to the AZTA. I go to the meetings and I meet these teachers, who are ordained in the Vinaya or as bodhisattva priests, or are lay. And we talk. Of course this is another unusual feature of the buddhadharma in the West, how people of differing traditions—and let me assure you there are differing traditions just within the Zen family—nonetheless come together to meet, to talk, to learn from one another. And I wonder.

I’ve often wondered if within a different context, Chairman Mao’s famous call to let a hundred flowers bloom wasn’t the signal feature of modern religion. Even within our small corner, I’m watching this cornucopia of possible expressions of the Zen way emerge. And I, for one, am increasingly horrified, intrigued, offended, fascinated, and most of all, hopeful.