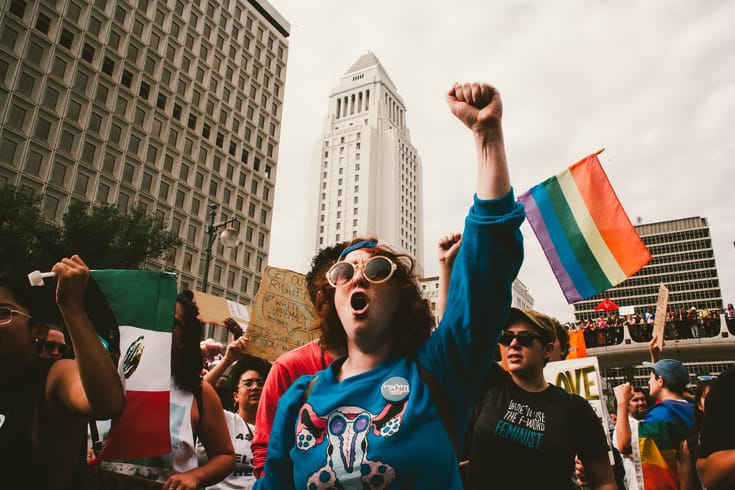 I love you, Western Buddhism, but as a gay man, I find your privileged lack of urgency in the wake of the election of Donald Trump disturbing. This is not a new feeling for me.

Last week, someone sent me a link to the LionsRoar.com article, “Buddhist Teachers Respond to Trump’s Presidential Win.” Several Buddhist teachers had written a paragraph or two offering their wisdom. As I read, I felt a very familiar disappointment and anger arising in me. While some of the entries were good enough (invariably the ones from people of color), most left me feeling that these were the words of people who don’t know what it’s like to be on the receiving end of oppression under a conservative government. People with no skin in the game. Certainly, these are not the words I’m hearing from my black female best friend, my Mexican American niece, or my trans friend.

I had an experience a few years ago which transformed me as a Buddhist teacher: a non-white male student of mine told me about coming to our center during the week that news of Trayvon Martin’s murder broke in the national media. He spoke of how no one in our mostly white sangha seemed to know that it had happened and how the teachers didn’t mention it. For him, Trayvon’s murder was monumental, the only thing on his mind. As a white teacher, I wondered if I had been one who dropped the ball. As a gay person, I know what it’s like to not see the weight of your grief reflected or honored in the places where you seek refuge.

As I read the Lions Roar piece, that feeling of not being seen came up when I read statements like one that said if we could get through Nixon, Reagan, and Bush, we could get through this too. I thought to myself: who’s the “we” that got through Reagan and Bush? The Reagan/Bush era was an absolute horror for my community. An entire generation of intellectuals, artists, friends, and lovers didn’t “make it” through Reagan and Bush. Two decades later, I worked on a suicide prevention line for gay teens during the George W. Bush administration. Lots of them didn’t “make it,” either. Such a sentiment, however encouraging, erases queer history. By “we” the author appears to signify only people who aren’t the targets of explicitly racist, sexist, and homophobic policies of historically Republican governments. Those who weren’t moved by desperation to dump the ashes of their dead lovers on the White House lawn (as AIDS activists did in 1992 under President Bush) in a vain attempt to get the government to give a shit that we were dying.

Those of us who are members of marginalized populations are experiencing this election as a trauma. A legitimate threat! It provokes our very real traumatic histories.

My own community’s collective history includes physical violence, social ostracizing, the wholesale abandonment of our families, and a lack of safety in just about every institution that matters. Police, enforcing the state’s (historically conservative anti-gay) laws have for decades brutalized gay and transgender people. In our schools, most of us feel or have felt unsafe, often without any advocates, while curricula taught us nothing of our own our history. The medical establishment pathologized our sexuality and brutalized us with electro-shock, “drowning” medication, castration, and lobotomy. By and large the religious right has been THE driving force of hatred towards LGBTQ people. In the 1980’s, the government, under Reagan, had a top-down mandate that nothing having to do with gay people (including AIDS!) would make any Republican agenda. That cruel mandate held for all eight years of his administration. You can go on YouTube and listen to audio of Reagan’s press secretary repeatedly mocking us while our people died.

Many of us are living with socially conditioned shame and internalized homophobia (if not outright self-hatred) as we navigate a society engaged in a constant debate about whether we are worthwhile human beings or not. Even today, staying safe means we must police our speech, our words, our voices, our clothes, what we express interest in or excitement about. The oppression gets at us from every angle. I have never had a public moment of affection for another man, gay or straight, without assessing my surroundings for safety. That is trauma. Women, transgender folks, people of color, Mexican Americans, immigrants, native people, differently abled people, and those with intersectional identities (and the list goes on) all have their own distinct trauma histories which are being triggered this week.

Western Buddhists, during times like this we need more from you than standard-issue statements admonishing us to “sit with our fear and sadness.” We’re already experts! We need safety. We need to know you see us. We need to know you can receive the enormity of what we are carrying. And we need protection.

Here’s what I would have written for that article:

While I acknowledge many Buddhists are, in fact, engaged in social-justice work, not nearly enough of you understand trauma. Find out. You may be surprised, for example, to learn that meditative interventions which are helpful for a person with a nervous system which has not been impacted by trauma might be counterproductive or even harmful to a person with a trauma history. We in the trauma field are constantly working to repair the harm done by mindfulness teachers who have no education about trauma or who believe the dharma is itself a sufficient path to the resolution of trauma. I can’t say this firmly enough: It isn’t!

What I want to say is this: it’s time to wake the wakeful! If your practice is only about you and you are not really standing in the margins with the most vulnerable members of society for the next four years, then for me, your compassion and wisdom are impotent.

I’m angry, I’m not sorry, and I will resist!

My life and lives of my friends, family, and lovers depend on it.

Pablo Das is a Buddhist teacher, musician, amateur queer historian and a practitioner of somatic experiencing. He has a one-on-one coaching practice specializing in integrating Buddhist practice and principles in the resolution of trauma. He lives in Los Angeles.