For a long time, Dorotea Mendoza hid her Marxism from her fellow Buddhists and her Buddhism from her activist comrades. Finally, as the dialecticians say, she resolved the contradiction. 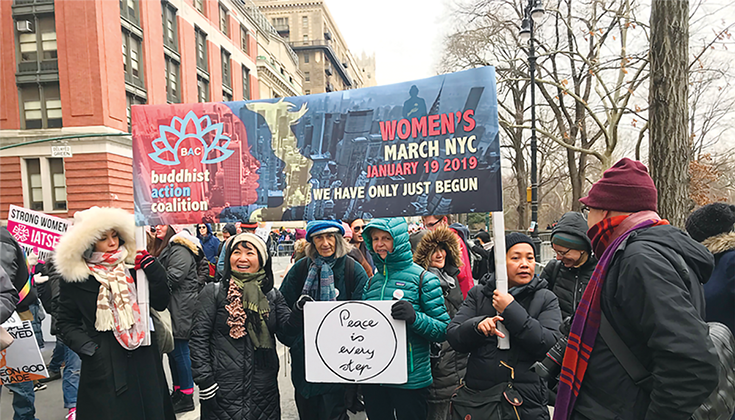 “I’m a Marxist,” I blurted out in front of a group of Buddhists.

We were gathered one Monday evening in New York for the Buddhist Action Coalition’s monthly meeting. I don’t remember the specific context. It may have been a discussion on finding a sustainable direction in our work, or maybe a deliberation on a dharma–political theory study group.

After the meeting, one of the Buddhist teachers in attendance came up to me and said, “That was the best part of the meeting.” We both chuckled. He and I have had spontaneous dialogues on socioeconomic theories, Marxism in particular, but those had been one-on-one conversations. This declaration was public, and was my first amidst fellow Buddhists.

In the 1990s and early 2000s, in my political and organizing work, in the activist circles I traveled in, I’d kept my Zen practice secret. The ideas of compassion, openness, loving-kindness seemed incompatible with the revolutionary, radical, materialist ideological foundation I’d been cultivating with my comrades. Not to mention sitting meditation, walking meditation, and silence. Are you kidding me? We speak with a bullhorn. We move hard and fast, with might. There is urgency. People are dying…

Once, when I signed off “Peace and love” in a correspondence to an organization working with political prisoners in the U.S., the reply came with a corrected salutation of “Peace, love, and IN RAGE” (yes, in caps). In the handful of times I managed to go on silent retreats in Upstate New York, I stuck to the idea of silence and kept mum about it.

One time I missed several phone calls (email wasn’t en vogue yet) about critical international mobilizations against then-Philippine president Fidel Ramos. Two college students in the Philippines had just been killed in a counter-insurgency raid by the military. A human rights lawyer shot and killed. A journalist shot and killed. Take to the streets. Lightning rallies in front of the Philippine Consulate on 5th Avenue.

“Where were you?” I was on a weekend silent retreat, I confided to a friend. “Why?” she said. “Woman, you’ve been silenced long enough.” Obviously, she and I were talking about two different kinds of silence. Hers was the silence of oppression. Mine was a silence that allowed for deep listening. I couldn’t explain this to her. Back then I had neither the words nor the courage to articulate any of this.

Don’t get me wrong—these comrades were not cold-hearted, loveless people incapable of gentleness. Nor were they ignorant of Zen Buddhism. They were magnanimous and well-studied in Eastern, Western, and Indigenous philosophies and histories.

My base organization back then was a Philippine–U.S. women’s solidarity group that worked on all sorts of issues—from militarization, sex trafficking, political prisoners, globalization, open-pit mining, and environmental degradation, to solidarity work with Haiti, El Salvador, Palestine… Everything was a women’s issue. No compartmentalization. All interconnected. We were serious about the liberation of all beings. Much like bodhisattvas.

Meanwhile, in my Zen life I hid my Marxist ideology, my radical tendencies. Though I was aware of Buddhist teachers and communities practicing socially-engaged Buddhism, I was unconvinced of my own practice. I had sat for the first time in 1988 at a Zen center in Soho. The teacher was a white man. The teachers at all the subsequent Zen centers I visited were mostly white men. As an immigrant, brown woman from the Philippines, awake to my ancestral history, I had a hard time trusting the teachers and I regarded the institutions of Western Zen with suspicion.

Nevertheless, the Zen teachings resonated with my political consciousness. The ideas of impermanence, non-separation, practice and process, and interbeing naturally translated into political theory and the ideas of dialectical materialism: the negation of the negation, the unity and struggle of opposites, quantitative changes toward qualitative change, the interconnectedness of all phenomena. The fundamental sameness was beautiful and awe-inspiring. Still my political work and Zen practice remained disconnected.

It wasn’t until 2009 that some clarity finally came. I was at a year-long study period with writer and Zen teacher Natalie Goldberg, whose four decades of dharma work has been through teaching writing as practice. In one of our sessions, Natalie asked us to name an essential conflict we’ve lived with. What are you caught between?

Between armed revolution and the big mind. Between radical social politics and the loving-kindness of Zen practice. I couldn’t dismiss the farmers in the Philippines who take up arms with the New People’s Army because those in power have decided that their farmland is best used as a golf course. Nor could I dismiss those who join the armed underground movement after having their shacks demolished to pretty-up the land for an international economic summit.

I have witnessed these, and much more, in the many trips I had taken to the Philippines for my political and organizing work. Yet I am sure that non-violence, embodying peace, is the only real way to liberation.

“We need a third thing,” Natalie continued with her lesson on polarity, a way to step out of the conundrum. In the dialectical analysis used in political theory, this third thing is called “the resolution to a contradiction.” Of course! Why didn’t I think of that?

So, what’s my third thing? Cultural work—art and writing practice, which I’ve actually been doing all along. I started organizing and doing activist work in 1991, the same year I discovered Natalie’s Writing Down the Bones.

Last year, I and three women I’ve been doing writing practice with for sixteen years decided to formalize our writing group and share what we know of practice. We created a non-profit: Sari-Sari Women of Color Arts Coup. Our inaugural event was Women Write the World, a mini-retreat for women activists, social justice writers, and direct service providers. We led zazen, walking meditation, and writing practice. We invited old comrades, former political prisoners, survivors of violence, underground comrades—the same women I once hid my Zen practice from. Now I’ve found a way to share Zen with them, and they have embraced the quietude and the slowness.

I’m sitting, holding, practicing with all of it now. No separation. My activist friends have asked me to lead Zen meditation and writing practice at political gatherings. And I’m okay with saying I’m a Marxist (though I know I’m more than that) in front of my Buddhist comrades at the Buddhist Action Coalition. I’m sure I’m not the only one among our ranks.

Dorotea Mendoza is a writer, activist, and Zen practitioner. She was born in the Philippines and grew up in New York City’s East Village. She now lives in Brooklyn with her partner Matthew and thirty-three house plants.