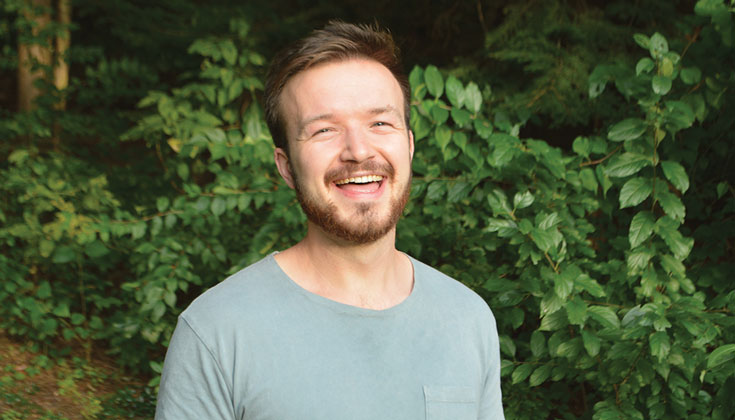 My third trip to the emergency room suffering from a panic attack was a wake-up call.

I was a sophomore at Wesleyan University. I had just returned to campus from a powerful year studying Ashtanga yoga at home in Michigan and in Mysore, India. I felt disconnected from my peers, from the institution I was attending, and from the whole way of life I was told I should be looking forward to. People around me seemed numb and disembodied, lost in substances and screens. I felt trapped between my parents’ warnings that college was important and the bodily revolt I felt while actually experiencing life at an elite educational institution.

Chronic mental illness has become the default state of affairs for many college students. The American College Health Association found that in the last year, 45 percent of American college students felt “so depressed it was difficult to function” and 65 percent experienced “overwhelming anxiety.” These statistics reveal the brokenness of an entire model of education and way of life.

In the spring of my sophomore year, still in the grips of a mental health crisis, I visited Dai Bosatsu Zendo— a Zen monastery in the Catskill Mountains—with a small group of students. At Dai Bosatsu we were welcomed to stay without charge in exchange for working to purify our minds. It was a revelation to me that such an institution existed so close to home.

This was the type of education I’d been seeking. I saw my own anxiety as a sign that the life I was living was incompatible with my deepest intuition. Here was a place where I had the time, space, and support to search for the roots of my disconnect. A place to untangle the knots of a bruised and selfish mind and to discover, in that work, the roots of suffering in the world at large. To discover the roots of problems such as climate change, racism, speciesism, sexism, and economic inequality.

Here was a place designed for people to work with the afflictions of greed, hatred, and ignorance at the most basic level. It made the world seem livable.

I discovered there are many centers that do this work. However, I learned that despite beautiful facilities, practiced teachers, open beds, and generous financial assistance, few young people knew that such opportunities existed. Getting the word out became my consuming passion.

With the help of my friends and mentors, I reached out to other universities and began to create ties between student groups and monastic centers. Over the last year, this project has coalesced into the creation of a nonprofit called Dharma Gates, with the mission of connecting young people to deep practice.

Our first major event was an intercollegiate meditation retreat at Dai Bosatsu Zendo last January. Students from six universities took the plunge into silent retreat, many for the first time. They left wanting more. Since the first retreat, Dharma Gates has organized a half dozen day-long meditation intensives at universities across the East Coast and a multi-university retreat last August.

From these events, we didn’t just learn there is an enormous thirst for dharma among the younger generation. We also discovered some of the barriers that alienate younger people from meditation practice. Directly addressing these barriers, I believe, will not only make dharma communities more accessible, but will also bring a new clarity and vigor to existing sanghas.

An approach to meditation that is deep, engaged, integrated resonates with young people. We have repeatedly encountered the concern that meditation is a vain pursuit on a planet that is desperately calling for direct action. Furthermore, any sign that a practice is about transcending or escaping from life (thereby hiding from the pain of the world), rather than fully integrating into our lives, is a big red flag.

In my experience, these qualities—engagement and integration—promote one another. Communities that embody direct service, demonstrate intersectional awareness, and value other embodied modalities such as therapy, circling (interpersonal meditation), and body practice, appear more trustworthy to college-aged people. The last fifty years have made it clear that the ongoing work of directly addressing trauma, uprooting unconscious biases, and finding psychological wholeness is important, no matter one’s stage in practice.

Finally, young people hunger for depth—in their lives, in the world, and in their spiritual practice. Many students feel that the mindfulness programs offered at their universities are patronizing and shallow, only offered to help them abide in a dysfunctional system. They want deeper answers to the problems they, and the world, face.

Our answer to this, to which students have responded so far, is not to downplay either the difficulty or great potential of intensive meditation practice. The Buddha did not promise his followers stress reduction; he promised liberation. Many people alive today have had and continue to have deep experiences of awakening. These experiences are real and attainable. If I had not had a teacher intervene at that critical time to whisper in my ear “It goes further,” I may have stopped practicing several years ago.

Meditative insight is real, deep, and almost always requires grit and determination. Monastic training is just that— training. It is developing the immeasurably valuable skill of working with the mind. By making this clear, we give young people a way forward, a place to put their energy that is meaningful. Those who choose to stay in monasteries long term will become the next generation of dharma teachers. Those who return to the world will become a generation empowered to transform our society from the inside out.

Our experiences suggest that when meditation communities address these issues, many members of the younger generation are ready to do the hard work of sitting down and training their minds. We have consistently encountered students eager to be challenged. At one workshop, a chaplain from Syracuse was shocked that so many students would show up on a Saturday to sit all day. In bridging the divide between dharma communities and the younger generation, we might revitalize existing sanghas, provide a refuge for people in need, and train a generation well prepared to address the approaching planetary crisis. In my vision for the future of Buddhism in America, periods of intensive meditation practice become a norm, a respected life stage, and a form of study as common as taking a gap year, serving in the Peace Corps, or attending law school. Monasticism would be a valid career path, understood to be serving a critical role in our society.

My generation is searching for the best way to be of service in a sick society, on a damaged planet. Connecting aspiring change makers to deep dharma is one hopeful way forward.

Aaron Stryker is a twenty-three-year-old recent graduate of Wesleyan University, where he studied philosophy. He is a resident at the Ann Arbor Zen Temple and a founder of Dharma Gates, a nonprofit organization dedicated to making intensive meditation practice accessible to young people.