In a conversation at The Shinnyo Center, teachers and practitioners discussed the question: how can Buddhists serve young people who want spiritual fulfillment but shun traditional religion without compromising their sacred teachings? 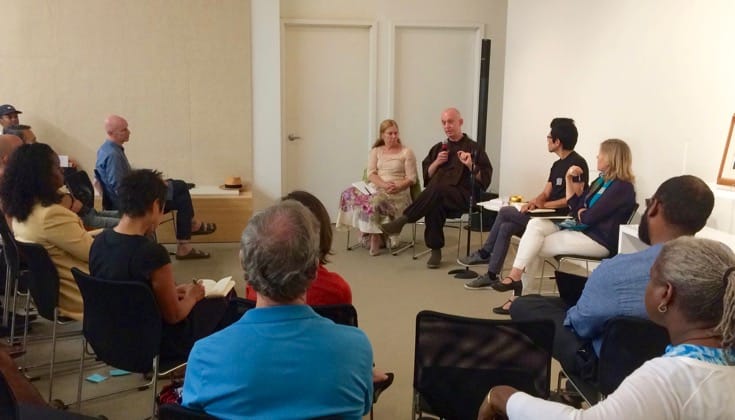 Greg Snyder speaks to the audience about power in Buddhist institutions. “Religious institutions have actually owned the sacred to control the secular. We have our own history of that, and still do.” Photo by Sam Littlefair.

On Friday, contemplative teachers and practitioners in diverse traditions came together at The Shinnyo Center in midtown Manhattan to discuss the future of contemplative philosophy. The event was titled “Joining the Sacred and the Secular,” and was organized by GPIW and the Contemplative Alliance. Most of the discussion focused on a critical tension: young people are hungry for spiritual fulfillment, yet seem to eschew religion; how can contemplative communities serve secular spiritual seekers without compromising the sacred heart of their traditions? Attendees discussed the secularization of traditionally spiritual practices like mindfulness and yoga, and the spiritualization of technology and activism.

Rev. Qalvy Grainzvolt, the lead meditation guide at The Shinnyo Center, opened the event with a quote from Muriel Rukeyser: “The universe is made up of stories, not atoms.”

In that spirit, much of the day’s conversation centered around the language and narratives that Buddhists, mindfulness teachers, and yoga teachers use to share their teachings with newcomers: Is mindfulness suggested as a tool for relaxation or liberation? Are teachings prescribed or offered openly? Do we see technology as an impediment, a gift, or a neutral tool?

If we are giving people practices that help them connect with their life, minds, and hearts, the natural trajectory of that will be to deepen a sense of the sacred.”—Jessica Morey

Most participants agreed that the sacred is secular, and so the question is not how to join the two, but how to appreciate their unity. Theravada monk Bhante Suddhaso offered a different viewpoint, suggesting a definite delineation: the sacred is what leads us towards enlightenment, and the secular is that which does not. In that traditional sense, secular philosophies that offer worldly experiences as their end goal are harmful, for they may actually guide practitioners away from enlightenment.

There was ample discussion about what teachings do or do not guide practitioners towards enlightenment and whether that is necessary. Jessica Morey, who teaches mindfulness to teens, said “If we are giving people practices that help them connect with their life, minds, and hearts, the natural trajectory of that will be to deepen a sense of the sacred, because that is our nature. The more that we connect with what’s real and what’s true, and that we stop getting caught in the discursive mind, we naturally see the sacred.”

We, as teachers, need to develop a sensitivity. That sensitivity is about meeting people where they are.”—Lama Rod Owens

“We, teachers and instructors, are deeply colonized by very destructive ways of thinking,” said Owens. “I think about racism, oppression, capitalism. That often compromises our integrity.” As a result of that, said Owens, “This new branding [of mindfulness] is actually very violent. We’re acting as colonizers, going to these spaces, and saying ‘okay, you need to be mindful.’ We, as teachers, need to develop a sensitivity. That sensitivity is about meeting people where they are.”

Ashtanga Yoga teacher Eddie Stern corroborated this viewpoint, saying that he feels many yoga teachers can have a negative impact by not respecting their tradition. Many teachers agreed that in order to truly be of benefit to one’s students, one must be sensitive, open, and properly trained. Part of that might mean adjusting what language a teacher uses based on what will resonate with their students, which could even mean adapting religious language to secular language.

The conversation also covered the role of technology. “I think young people are going to have to teach us how to be mindful of technology,” noted Morey. Morey leads teen retreats, during which the participants don’t have access to their phones. She, like many other members of the discussion, noted that people seem to be happy when they are less distracted by their phones. Matt Weiner, the dean of religious life at Princeton and a Buddhist practitioner, said that the busier you are the less loving you are, and technology abets that busyness.

However, there was also general agreement that technology is extremely beneficial for connecting people to teachings and peers. Tricycle managing editor Emma Varvaloucas said that people need to curate digital content in order to make it helpful, and one participant noted that “oral tradition was the original social media.”

The conversation ended with a discussion of activism and the responsibility of contemplative institutions to engage with secular and social issues. Presenters discussed the importance of heart, open-mindedness, training, and human connection for continuing contemplative traditions. One idea seemed to be agreed upon: that there is a hunger among young people for contemplative teachings, and contemplative teachers will have to bring everything they have to bear to meet both the spiritual and secular needs of modern society.