Do we ever really know how things will turn out? Donnell King, whose daughter suffers from a rare, debilitating disorder, has learned not to look for certainty. 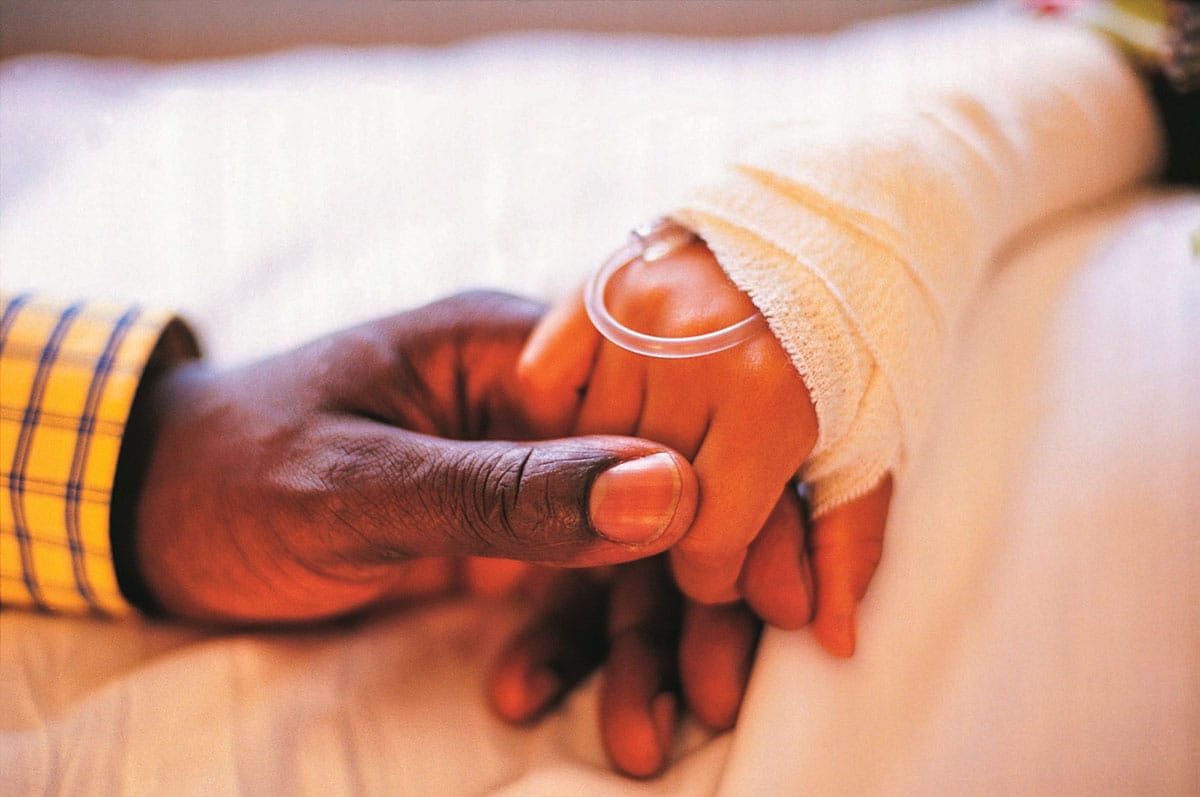 I heard these words as I stepped out of the elevator at Children’s Hospital. A mother held the hand of her daughter, who appeared to be ten or eleven years old. The girl was quiet, but tears ran down her face. A purple bandage encircled her arm at the elbow.

Pain is real. Suffering comes from thinking about pain—pain in the past, anticipated pain, and resistance to pain. Honestly, the girl didn’t appear to be suffering. Her tears were drying, her face passive. I suspect it was really Mom who suffered. She was suffering because she was unable to stop her daughter’s pain.

I can relate. My own 11-year-old daughter is in a room on the third floor, hooked up to an IV, humidified oxygen, and a powerful monitor. We don’t know what’s going on, but we know she’s in pain, and when we try to feed her, her little belly distends. So I can’t tell her it’s all over now.

It’s not her first stay. In fact, this is Hannah’s 30th hospitalization. She has an extremely rare chromosomal disorder, one only 15 to 20 other people have at any given time.

When I was about ten, I got a shot for something. That particular shot really stung, and I started shouting, “Water! Water!” The doctor thought I was about to pass out and gave me one of those cone-shaped paper cups to drink from. But I immediately dumped the water on my arm, resulting in peals of laughter from everyone except me.

That shot was nearly 50 years ago. You might say I’ve suffered from it ever since. “It’s all over now”—except it isn’t, and won’t be, until we can think about something else.

It’s not accurate to say there’s a goal to meditation. But if there were, it would be completely wrong to say the goal was to stop thinking. If anything, the goal is simple awareness. As a skillful means, meditators often count their breaths. That’s a simple way to give the monkey mind something to do, something else to think about. You can’t force water to be still, but you can stop shaking it and let it settle.

As parents, we try to stop the pain. We seek some kind of certainty—what’s wrong with my child? How do we treat this? How long will she be in the hospital? What are the odds?

The fact is, none of us has any certainty. We just have the illusion of it.

Hannah has profound neurological issues that leave her unable to engage in almost any voluntary movement, and even some involuntary ones like closing her epiglottis. Thus, she’s fed by a permanent tube in her abdomen and requires help with breathing and voiding her bladder. She’s unable to speak, and so far hasn’t been able even to communicate via such signals as “blink once for yes, twice for no.” Yet she follows us with her eyes, and when I talk baby talk to her, she rolls her eyes like any 11-year-old girl.

What’s the prognosis for Hannah? no one knows. The fact is, none of us has any certainty. We just have the illusion of it.

In other words, my wife and I think she hears and understands, but she’s unable to communicate back to us—unable to scratch where it itches, unable to tell us where it hurts.

We’ve no idea what will happen to our child. No other parents know that about their children either. But they have the illusion of certainty—going to school, taking part in activities, graduation, college, marriage, career. We don’t have the illusion.

People speak of being disillusioned as if it’s a bad thing. Really, it’s nothing more than waking up.

In the face of such unvarnished reality, it can be tempting to seek distraction, but distraction doesn’t help. When you’re whistling in the dark to distract yourself from fear of the darkness, you’re still aware you’re avoiding something fearful. As the self-help community says, what you resist persists. Push it away, and like a playful puppy it just comes running back. Sit with it, accept it, and it may crawl in your lap, but it will settle down.

“It’s all over now.” I heard that phrase from another family, this time in the ER when we first brought Hannah in for this visit. A family stood together, weeping, hugging each other. I don’t know what moment had passed for them, but I have a suspicion, and I fear such a moment myself. Like the shot following me for 50 years, I can dread something that might not come for 80 years, long after I’m gone. When I dread the moment Hannah leaves this world behind, it robs me of the joy of this moment.

This moment is over now, and I don’t want to miss any moment anticipating some other moment, even the moment we can take Hannah home from the hospital.

Still, there’s the desire for comfort and to comfort. In this, my daughter is my teacher. I don’t think she suffers, but she does feel pain. Her face twists in a silent struggle. I can’t do much for her: only make her breathing easier by ministering suction to keep her from drowning, and be present with her.

In the time it’s taken me to write a paragraph, I’ve suctioned her tracheostomy twice, and I’ve stroked her hair and face. She doesn’t smile, but her grimace relaxes, her eyes half close, and her pulse drops twenty points.

I count Hannah’s breaths, time drops off, and I watch her.