In her widowed father’s pale, hopeful face, Ann Nichols saw that everything her mother had fallen for in a Cambridge apartment fifty years earlier was still alive in him. Why should he be limited to a life without the possibility of romance? 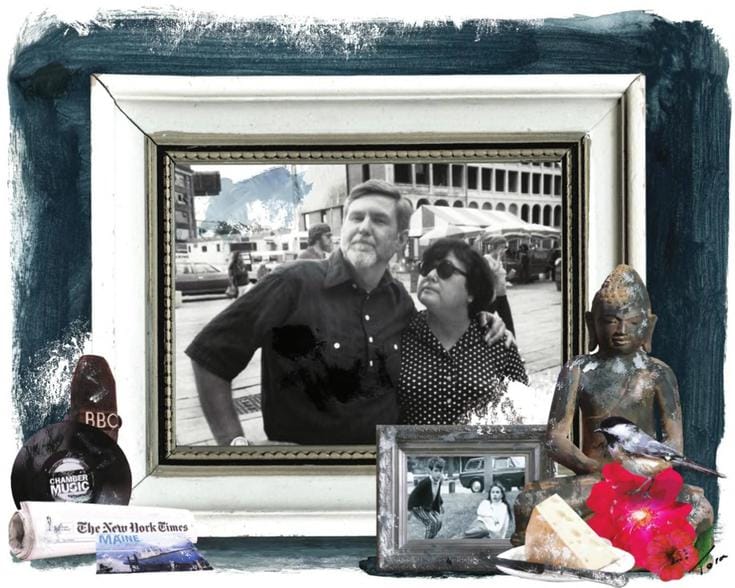 We were somewhere in the south of France, and it was hot in the tiny rental car, which was the color of a Peter Max lime. My mother was navigating, my father was driving, and we were lost on our way to the beach.

“Give me the map,” said my father, but my mother continued to gaze mulishly at the colorful network of lines on the rectangle in her lap.

With that my Hungarian-Jewish mother burst into a spectacular blaze of temper, which became progressively more apoplectic as my father grew more reasonable. This was always how it was when they argued. Yet my brother and I knew that soon their argument would blow over. The two of them would work together to figure out that they’d missed a turn a few kilometers back, and we’d be on our way again.

This was the seventies, and the parents of all of our friends were getting divorced. All fathers seemed to be living in apartments with women other than the moms we’d known since kindergarten. There were weekend visitations and custody battles involving lavish gifts and ski trips. Famously, my brother saw Mr. Gilbert hurl a saltshaker at Mrs. Gilbert the morning after a sleepover. But we knew that this wouldn’t happen to our parents, who were a solid unit, an impenetrable fortress. We were, in fact, a little disappointed we had no dramas to report. No one was particularly interested in buying us every Breyer horse figurine ever made in order to win our loyalty and affection.

My parents had a kind of marriage that was rare: it was love at first sight in a mutual friend’s Cambridge apartment, followed by fifty years of deep friendship, mutual respect, and unwavering romantic love. They weathered job losses, miscarriage, the deaths of their own parents, raising two children, and a series of illnesses. Their tools included good humor, the BBC, The New York Times, chamber music, summers in Maine, winters on St. George Island, and good cheese after dinner. My brother and I split the genes along parental lines. He got my mother’s olive skin, her Hungarian temper, and her quizbowl-worthy acuity. I inherited my father’s pale skin, Irish melancholy, and dry sense of humour.

My father, the only child of New England parents, learned to brave the rough and tumble of my mother’s large Midwestern Jewish family. My mother insulated my father from noise in the house and learned to make baked beans the New England way.

They did not, however, march in some beige marital lockstep. They traveled separately to conferences, read different kinds of fiction, and disagreed about the benefits of lavish generosity versus cautious saving. Even as my mother donned waders to fish for floating Christmas ornaments in the flooded basement on their twenty-fifth wedding anniversary, she found it hilarious that my father was at that moment attending a banquet in Shaolin, China, far from the bobbing Santas and submerged furnace pilot light. They were tightly bound in ways impervious to a temporary imbalance of fortune.

“I love you and I love daddy,” my mother sometimes said, “but I picked him out.” Not a rejection; a statement of fact. There was plenty of love to go around, but he was and always would be the center of her universe. As she was his.

Ten years ago my mother developed congestive heart failure and eventually required a kidney transplant. Although she struggled to maintain their schedule of social events, travel, and post-retirement wish fulfillment, she eventually gave in to a slow invalid life that infuriated her on a daily basis. My father assumed the role of caretaker, taking her to medical appointments and sleeping in hard plastic hospital chairs. Through his own Parkinson’s disease, cancer, and radiation, he sorted her pills and tried to cook things that would tempt her flagging appetite.

Last October, she died. We were all there—my brother and I on either side of her and my father stroking her thin, white hair. As her breaths grew slower, I practiced the Buddhist meditation practice of tonglen, taking in her suffering and sending her peace and love. I knew that as the waves of her pain receded, mine were rushing in.

Although I’d never worried about being the child of divorce, I had fretted since childhood about losing my parents to death. And losing my mother was in every way as hard as I feared it would be. It was, it seemed, an end to everything that had been my family.

Within a month of my mother’s death, my father had a recurrence of cancer and a third surgery. There were complications, and for three months he could neither speak nor swallow. After ten days in the hospital, he was sent home with a tube in his stomach through which he was to consume highly caloric, almond-scented liquid. The tremors in his hands and his general weakness made it impossible for him to feed himself. He could not pour the formula neatly into the 60cc syringe; he could not grind up his medications and mix them with the formula. I moved back to my childhood home and became his live-in nurse.

For those months we existed in a gentle, routine-bound cocoon. Physical therapists, speech therapists, nurses, and the occasional visitor came and went, but mostly it was just the two of us. I missed my own house, my husband, my son, and my dogs, but it was healing to be in that house as I tested the depths of my grief. Every four hours I fed my father, and between feedings I cleaned out my mother’s closet, her drawers, and her office. I wore her slippers, used her lip balm, and slept in one of her sweaters. I meditated daily: observe the pain, let it be, let it pass.

One night after the 11 p.m. feeding, my father noticed that I’d been crying. “Do you want to talk about your mother?” he asked, as I coiled up the protruding plastic tubing and cinched it with Velcro. “I’m afraid I haven’t been very good about that.”

I shook my head and kissed his forehead. “No,” I said. “I talk to her all the time.”

He nodded, and I left him to drift into Percocet sleep.

Sometime in the final month of my nursing stint, my father mentioned a woman he’d met in the neighbourhood.He’d been walking the dog one night after my mother died, and the woman had stopped to admire his stubby Corgi. It soon became clear to me that this wasn’t just some woman but a woman. Dad set up a typewriter so he could write letters to her, no longer trusting his shaking hands to produce even his characteristically terrible block printing. He clipped an advice column from the local paper and left it wordlessly by my computer. Its title: “Widowed Dad’s Dating Dilemma.”

While both of my parents were alive, I’d imagined my mother left alone and coming to live at our house. I’d also pictured my father left alone and leaning on me to help with nutritious meals and appropriate gifts for grandchildren. Both scenarios were wrenchingly painful, but I’d never considered that whoever was left alone would need or want another relationship. It seemed terribly unfair that this unanticipated challenge should be added to my already heavy burden.

Lying on the sunroom couch, I leaked tears as I thought about that woman, who was not my mother and could never replace her. What if they fell in love and married? What if she wanted to live in my mother’s house, sleep in her bed (with my father), take down all of the pictures of my mother with her grandchildren or (worse yet) intermingle them with pictures of some strange family? What would happen to my memories, to my reference point for how life should be?

When my father was well enough, he invited the woman on a coffee date. He couldn’t actually drink anything yet, but he was anxious to have a social engagement and break the traces of being homebound and infirm. Always dapper, he came downstairs in brown corduroy trousers that hung from his emaciated frame and a beautiful intarsia sweater over a button-down shirt. His hair was freshly barbered, and he smelled like St. John’s Bay Rum. He stood for inspection, holding out a sleeve for me to roll, and something happened.

I saw my sixteen-year-old son standing patiently as I rolled the cuffs of his sweater before he went on a date. I saw a man standing at the edge of a new life, breaking away from what came before but keeping its essence. He existed not only in relation to other people, as father, widower, and grandfather, but as a man. As himself.

My father was not going to forget my mother, their life together, or our life as a family, any more than my son forgot me as he moved toward independence. I saw in Dad’s pale, hopeful face that everything my mother had fallen for in that Cambridge apartment fifty years earlier was still alive in him. Why should he be limited to a life without the possibility of romance, of partnership?

“Am I presentable?” he asked as I finished the second cuff and tugged his shirt collar high enough to show above the sweater. I hugged him, being careful not to squeeze too hard the body that had all of my life meant strength and safety.

“You look beautiful,” I said. “I hope you have a wonderful time.”

“—I want you to be happy,” I interrupted, holding up his coat so he could insert an arm. “That is all.”

Ann Nichols has been a cellist, an attorney, a PTA president, and a ghostwriter. Currently, she’s writing a young adult novel with a Buddhist heroine and working as a professional cook.