On February 3, 2009, 4 PM Taiwan time, the much-revered Chan Master Sheng Yen died on the way from the hospital to Dharma Drum Mountain, the site of the international Buddhist cultural and educational organization he founded. He was 79 years old. 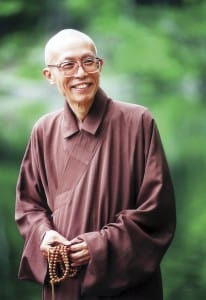 The Shambhala Sun and Buddhadharma have published several of Master Sheng Yen’s teachings over the years, and we’ve greatly appreciated his contribution to the dharma.

The following is a review we published in Buddhadharma of Sheng Yen’s final book, Footprints in the Snow (published last year by Doubleday). The reviewer is David Berman, editor-in-chief of Chan Magazine.

In the summer of 1992, I accompanied my kung fu teacher to Orlando for the national Chinese martial arts championships, where we were met by Meredith, a former student who had moved to Florida and had volunteered to host us for the long weekend. Meredith had more interest in spiritual work than in martial practice, and as I had been a meditator since the late sixties our conversation led to her lending me a book, Getting the Buddha Mind by Chan Master Sheng Yen.

I was captivated immediately. It was direct and clear, with none of the esotericism or cultishness I had come to associate with Eastern mysticism come West. It had neither the religiosity of Hinduism nor the opacity of Zen; it had moral spine without being doctrinaire; it was profound but not inaccessible; it taught process; it didn’t dangle the carrot of enlightenment. But it also defined progress—it gave me the impression that by walking this path I could actually get somewhere, at a time when my practice had come to seem not useless, but somewhat aimless. It wasn’t until I finished the book that I noticed, in the bio on the back cover, that Master Sheng Yen taught at the Chan Meditation Center in Elmhurst, Queens, only a half-hour subway ride from me.

Fast forward to 2008. Master Sheng Yen (from here on I’ll refer to him as I address him, Shifu) has been my teacher for fifteen years now, I’ve been editor-in-chief of his Chan Magazine for nearly a decade, and I’ve just finished reading his eighteenth book in English, Footprints in the Snow: The Autobiography of a Chinese Buddhist Monk.

Having known Shifu as long as I have, much in this new book was familiar to me. I’d heard and read stories of his childhood in the countryside north of Shanghai: he was born in 1930, the sixth and last child of a peasant family, and he was raised in a three-room thatched hut that his father put up on an acre of rented farmland. They tilled the fields with a borrowed buffalo, fished the Yangzi when they could, took in mending or worked for other landowners when they had to. Shifu was sickly, and slow—he didn’t walk until he was three, didn’t speak until five, and couldn’t learn to tell time. After only a few years of sporadic schooling, he entered Wolf Mountain Monastery at the age of thirteen through the good offices of a well-connected neighbor. His mother agreed because his prospects—of getting an education, of finding a wife, of making a living—were otherwise very poor.

Shifu has spoken often of his first religious experience as a novice at Wolf Mountain, which he recounts in Footprints: “Every morning and evening I did five hundred prostrations to Guanyin… one morning, I felt a force enter through the top of my head… the prostrations became effortless and natural… my mind became clear and bright… ” This solved his learning difficulties and gave him lifelong faith in the efficacy of prostration practice for clearing karmic obstruction. He recalls other formative experiences in Footprints that I’d heard before, like his escape from Mao’s revolutionary forces as they took Shanghai, and the difficulty of keeping his monastic precepts during his subsequent ten years of compulsory military service in Taiwan. He describes his first experience of “the bottom falling out of the bucket” after a night of meditation with Master Lingyuan, when years of pent-up questions and doubt were dissolved in an instant. He also recounts the rigors of his training under Master Dongchu, known to his terrified students as “the big gun,” and the peace and stability he felt during his six-year solitary retreat in the Taiwanese mountains.

Yet despite my acquaintance with the story of my teacher’s life, the telling of it here seemed altogether new and fresh to me. The book is thin on descriptive passages, yet faraway places and times come somehow wonderfully alive. The reader is transported to rural China in the thirties, to an ancient monastery surrounded by revolutionary terrors, to the military culture of McCarthy-era Taiwan, to the mean streets of New York in the seventies and the dumpsters in which Shifu found his first American altar and his vegetarian meals. There are no formal flourishes—no cliffhangers at the end of chapters, nor surprise course changes—yet I found myself impelled to read on, eager to know what would happen next. Shifu tells us what he did, where he went, what was there, and what happened without embellishment, but he gives us just enough of the right detail to bring the context to life and ground his story in history.

Most striking of all, the simplicity of the telling stands in dramatic contrast to the enormity of the journey it chronicles. This sickly child of an impoverished family in a devastated region at a desperate time became the carrier of the lineage of both the Caodong and Linji schools of Chan, the holder of master’s and doctoral degrees from Rissho University, the spiritual teacher of over 300,000 followers, the author of over ninety books published in nine languages, the founder of the Chan Meditation Center in New York City and the Dharma Drum Mountain World Center for Buddhist Education in Taiwan, and the keynote speaker at the Millennium World Peace Summit of Religious and Spiritual Leaders at the United Nations. It’s a journey that seems to traverse centuries and worlds, one that covers far too much ground to be encompassed by only two hundred pages of such unassuming prose. And yet Footprints achieves this, for which tremendous credit must go to the editor, Kenneth Wapner, and to Shifu’s translator, Rebecca Li. Translating from Chinese is difficult at best; capturing the author’s voice is a great achievement. Footprints in the Snow sounds like Sheng Yen, which contributes greatly to the book’s intimacy and power.

So there I was, about halfway through the book on my flight to Seattle, when the following unremarkable passage, from the chapter on his training with Master Dongchu, stopped me in my tracks: “When my old classmate stopped editing Humanity magazine, I took over, writing editorials and essays, handling letters from readers, receiving and sending back manuscripts, and doing copyediting, design, and layout. I learned from scratch. I didn’t know anything about using different font styles and sizes.”

In 1999, when my old classmate stopped editing Chan Magazine, Shifu asked me to take over, to write the editorials and edit the essays, to handle letters from readers, to receive and send back manuscripts, and to do the copyediting, design, and layout. When I objected that I didn’t even know anything about font styles and sizes, he responded that it was no problem, I would learn from scratch.

Shifu skillfully flattered me into accepting the job—for which I’ll always be grateful—and never told me that he was confident the job could be done by somebody with no qualifications because that’s exactly what he had done. It’s a good thing he didn’t. Knowing that I was being asked to follow in his footsteps wouldn’t have made me more confident, it would have scared me to death. And realizing that he had set me in his footsteps, I felt slightly ashamed—I’ve managed to learn something about the fonts, but I’ve missed an awful lot of retreats, let a lot of thoughts wander, squandered lots of opportunities to be more like him.

I know, of course, that regret is worse than useless—it is walking the path backward—but the same feeling of loss returned when I read the final paragraph and realized that in writing this book, Shifu was saying goodbye. It is not widely known, because he never speaks of it, that Master Sheng Yen is gravely ill. He lost a kidney to cancer several years ago and has been dependent on regular dialysis ever since. For much of the last decade, in fact, he has been making arrangements for the survival of his various institutions after he’s gone. Still, this is the first time I’ve known him to speak of his body of work as finished, and I think that, to his many disciples at least, the change of tone will be poignant. It also, in a way, explains the book’s modesty: the great corpus is done, and this book is not another opus, it is just the coda. “The important thing is not to fail yourself!” Master Dongchu told him. He did not. Having led the twentieth-century revival of Chinese Buddhism and having introduced Chan to the West, Master Sheng Yen has left us quite a bit more than his footprints in the snow, and, as was always inevitable, the rest will be up to us.

This review first ran in our Fall, 2008 issue of Buddhadharma. More from our magazines:

An interview with Master Sheng Yen, by Michael Liebenson Grady

Teachings: There is No “I” Who is Sitting;  Four Steps to Magical Powers;  Into the Depths of Emptiness.

I just received this note from Ernest Heau, an editor at Chan magazine: “Along with the sadness, we should of course rejoice that humanity has seen such a wonderful example of spiritual excellence.”  Indeed, and thank you, Ernest.