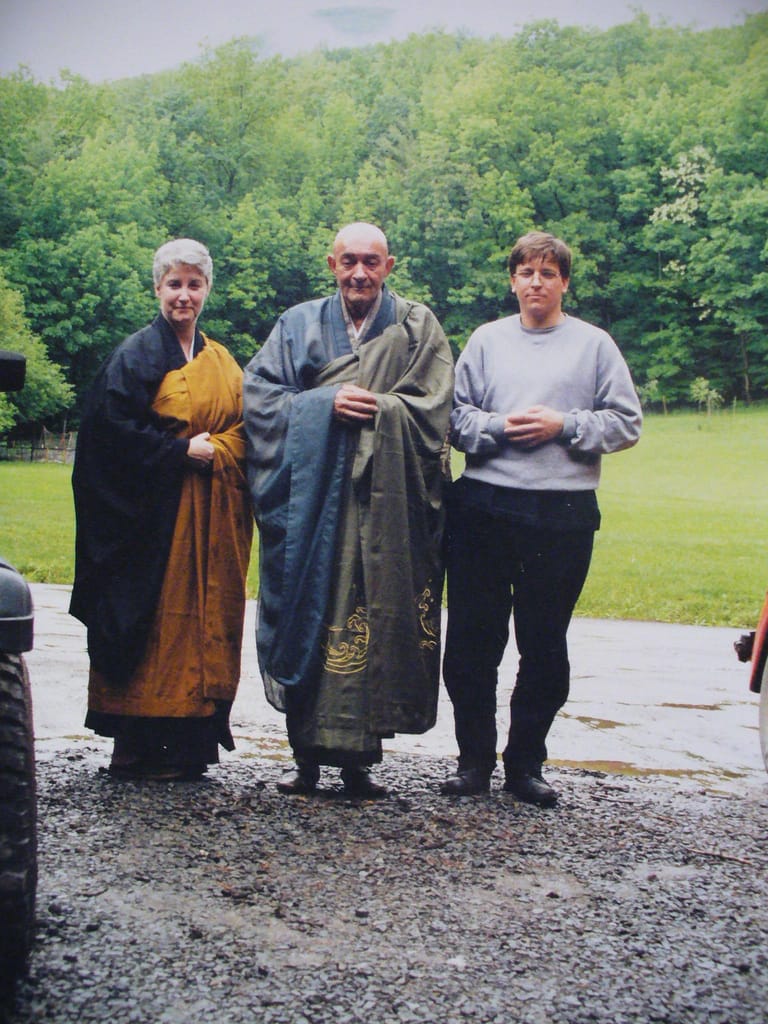 I met Daido at Naropa in the summer of 1976, where he was teaching Zen and photography. He was a striking figure, even among the throng of famous and infamous counterculture icons gathering around Chögyam Trungpa Rinpoche. He would stalk about, camera pointing, tall, lanky, slightly hunched forward. The emotional impact of his photographs astonished me, and still does today: fragments of the natural world intensely manifesting heightened consciousness. We hit it off and talked a lot—about our lives, wives, work, Zen, and spirituality. Although Daido’s heart was in the abstraction javascript:noop()he had learned from photographer Minor White, he had earned a living photographing wildlife, transporting the zazen of the meditation hall to brambled lairs where he lay in snow for hours waiting for a fox and her cubs to show.

I invited him to the Zen Center of Los Angeles to study with Maezumi Roshi and me, and to become director of center publications. He did a wonderful job. He and his wife and son lived in my house and we spent lots of time together. At intimate moments, he had a characteristic gesture of pinching your cheek with his thumb and forefinger.

He collaborated with Maezumi Roshi on The Way of Everyday Life, a translation of the Genjo Koan by Dogen Zenji. It included a commentary by Maezumi Roshi and Daido’s own photographic expressions of the profound and intricate text. Many of his photographs were in sumptuous colors. Daido had been a chemist and had worked professionally in the field, so he went himself to the print factory and supervised the mixing of the chemicals for the color production of the book to ensure the images emerged exactly as he envisioned. This thoroughness and rigor characterized all Daido’s endeavors in life.

We traveled back to New York together in 1980, where he helped me begin the Zen Community of New York, then left to establish his Zen center at Mt. Tremper in upstate New York. Throughout the ensuing years, I admired Daido’s intense focus and commitment to the dharma. Under his strict guidance, Mt. Tremper became a beacon for strong Zen training in the United States. I encounter people all over the world who were introduced to practice there or deepened their practice with him. I have come to know and appreciate his successors and the Mountain and Rivers Order he developed.

Daido has always been one of the most creative leaders in establishing buddhadharma in the West. His love for and immersion in the natural world led him to open the Zen Environmental Studies Institute, and to expand Zen training to include excursions in the wilderness, helping others reconnect or connect for the first time with nature. He has offered Mt. Tremper as a presentation site for so many wonderful teachers from a huge range of traditions and disciplines. He founded Dharma Communications, which continues to provide a quality, multimedia source for Buddhist teachings. He has written and edited so many wonderful books on traditional and modern forms of Zen practice, Buddhist ethics, art as the sacred-made-visual, and philosophy. His tireless devotion to the work of Dogen Zenji has helped introduce this seminal Buddhist to a wide audience of practitioners, academics, and artists in the West.

I’d like to offer a poem for my friend:

Deep within wild flowers,
Partridges cry out.
Tears like falling petals
Blow in the Wind.
Eternally and Everlastingly,
It is Revealing Itself.
Above the Bare Branches,
Whistling at the Moon, Playing in the Clouds,
The Golden Phoenix Soars hand in hand with
Dharma Brother Daido.