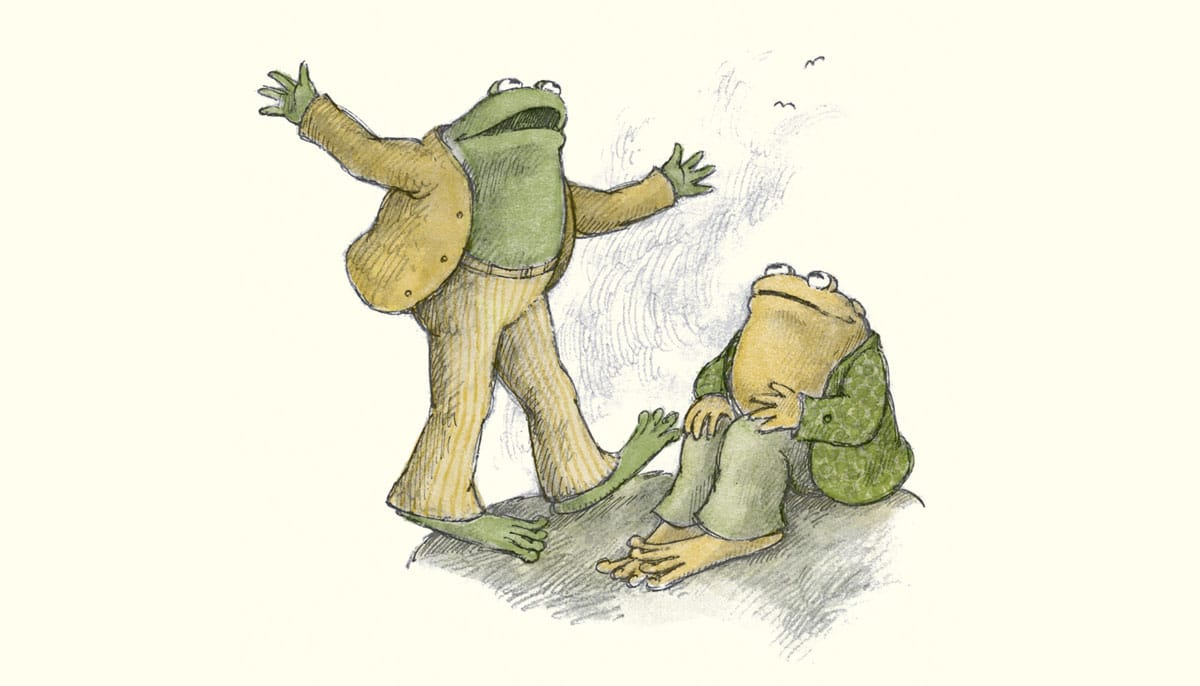 Through the 70’s, Arnold Lobel wrote and illustrated four extraordinary collections of children’s stories about Frog—practical, a problem-solver, eternally patient—and his best friendshowing Toad, who is ruled by his reactions to his surroundings: he wants this, he fears that. Frog never comments on Toad’s behavior, he takes gentle action. More often than not, a story ends not with Toad learning a lesson but with the two friends simply continuing on, side by side.

My parents read these books to me, and now I’m reading them to my children. We all adore them, for their easygoing humor, the fullness of the characters, the feeling of being inside Frog and Toad’s world. I’ve begun to notice resonances between Lobel’s stories and the dharma. (There’s no evidence that Lobel himself was interested in Buddhism, although his biography provides some insight into the undercurrents of deep emotion running through his deceptively simple stories. Lobel was a closeted gay man for most of his life. He was married and had two children. He died in 1987, at age 54, of complications from AIDS.)

Frog and Toad are ageless. There are no parents in the story—unusual for children’s books—and while their world is populated by other animals who drop in from time to time, the only real characters are Frog and Toad. In The Dream, Toad dreams that he is on stage, wearing an elaborate costume. Before him is a large auditorium, with only Frog in the audience. A disembodied voice announces, “Presenting the greatest toad in the world!” Toad preens on stage as the voice continues announcing Toad’s feats: “Toad will now dance, and he will be wonderful!” “Toad will now play the piano very well!” Toad notices that with each announcement, his friend in the audience shrinks. Finally, Toad can no longer see Frog at all. “Come back Frog! I will be lonely!” cries Toad. “Toad is spinning in the dark,” writes Lobel. Toad awakens frightened, and Frog is by his bedside. “Frog,” he says, “I am so glad you came over.” “I always do,” says Frog. The story ends with Frog and Toad spending a “fine, long day together.”

I see the The Dream as a story about interconnectedness. Toad’s behavior has a gradual transformative effect on Frog. By allowing himself to be caught up in the flattery of the disembodied voice, Toad finds himself alone. But upon waking up, Frog greets Toad with a compassion that reorients and comforts him.

In The Swim, Frog and Toad go to the river for a swim. Frog prepares to plunge in without his clothes on while Toad changes into a bathing suit behind some rocks. “After I put on my bathing suit, you must not look at me until I get into the water,” Toad says. “Why not?” asks Frog. “Because I look funny in my bathing suit. That is why,” says Toad.

Frog duly closes his eyes until Toad is in the water, and they swim together happily. Gradually other animals appear by the riverbank, and Toad instructs Frog to tell them all to go away, so he can climb out of the water without being seen in his bathing suit. “If Toad looks funny in his bathing suit,” says a snake, “then I, for one want to see him.” Other animals agree. “I have not seen anything funny in a long time,” says a mouse. Toad tries waiting until they leave, but he begins to shiver in the water. Ultimately, he climbs out of the water in his bathing suit. All the animals laugh, including Frog. “You do look funny in your bathing suit,” remarks Frog. “Of course I do,” says Toad, and he picks up his clothes and walks home.

What I love about this story is that you expect a moral that never comes. Rather than being a story about why we shouldn’t tease each other—a valid moral, to be sure, and one that’s found across children’s literature—it’s a story about fearlessness and nonattachment. As he emerges from the water, Toad accesses what we might call his warrior nature. Chogyam Trungpa said, “Warriorship is a basic sense of unshakeability. It’s a sense of immovability and self-existing dignity rather than that you are trying to fight with something else.” It’s an enormously valuable lesson in confidence-building for children, especially those who are anxious about being teased.

The Surprise is my favourite Frog and Toad story of all, and the first I’d experience as a spiritual text. First of all, it refers to something—a surprise—that never materializes in physical space, but in Frog and Toad’s minds only. The Surprise takes place in October. “The leaves had fallen off the trees. They were lying on the ground,” writes Lobel. Frog decided to go to Toad’s house and rake the leaves off his lawn. “Toad will be surprised,” he said. Meanwhile, Toad had the same idea. “I will run over to Frog’s house. I will rake all of his leaves. Frog will be very pleased,” thought Toad.

The two friends headed to each other’s houses taking different routes. They were both pleased to find the other not home. “He will never guess who raked his leaves,” they each said to themselves, while raking each other’s lawns clean. While each were returning home, “a wind came,” writes Lobel. “It blew across the land.” The wind blew the leaves that Frog and Toad had raked for each other all over their yards again.

“When Frog got home, he said, ‘Tomorrow I will clean up the leaves that are all over my own lawn. How surprised Toad must be!’” Toad, meanwhile, had the same thought back at his house. “That night,” writes Lobel, “Frog and Toad were both happy when they turned out the light and went to bed.”

To me, The Surprise is about the pleasure of loving-kindness. There is no goal or endgame required in the practice of loving-kindness. It is not a practice that requires a reward; it is its own reward, it reflects back on you. The kindness that Frog and Toad show each other is ultimately invisible, but it warms them both. As Shunryu Suzuki writes in Zen Mind, Beginner’s Mind, “We do not exist for the sake of something else. We exist for the sake of ourselves.”

Many children’s books focus on themes of skill mastery, persistence, and obedience, and end with someone accomplishing a goal, or coming to understand and obey a moral lesson. Certainly there’s a place for these types of stories. But what I find so refreshing—liberating, really—about Frog and Toad is that their world exists completely outside of these narrative conventions. Frog and Toad are not working toward a goal, they are simply living life as best friends, keeping each other company. Moral lessons emerge subtly, through their instincts of kindness. If there is a lesson to be learned, it is that different personalities (or different characteristics within a single personality) can work together in harmony to achieve an ever-adjusting balance.