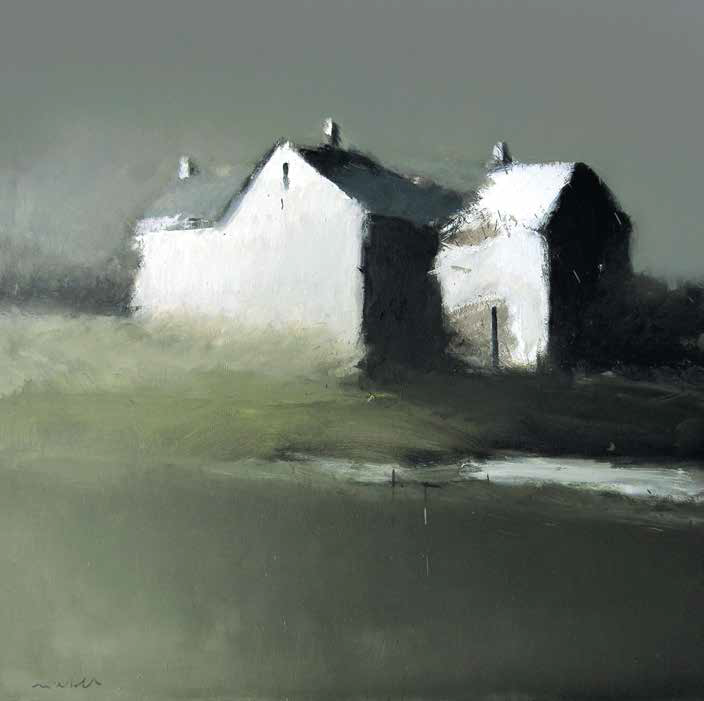 “Between Black and White ” (2014) by Victor Mirabelli, victormirabelli.com

It is easy to condemn racism but difficult to see how we internalize its prejudices, myths, and assumptions. I like to think I am not racist because I’m politically progressive and a meditator. But one day, new to working as a Buddhist teacher in South Africa, that self-perception came undone at a supermarket in the town of Ixopo in KwaZulu Natal. An elderly Zulu man was struggling to free a shopping basket and finally wrenched it loose from the pile of metal just as I walked past. I took it, like the white madam erroneously assuming he was a worker rather than a fellow shopper. My nice Buddhist veneer had not managed to halt the insidious internalizing of the racist system I was in.

Privileging “whiteness” has been internalized by everyone. It maneuvers us all along the scales of “good” self/people (privileged) and “bad” self/people (oppressed), generating a complex value system rooted in a grievous falsehood: that one racial group has more rights and worth than another. The Buddha clearly rejected this premise of racial superiority by ordaining all castes equally. In doing so, he demonstrated that equity and freedom are not just internal realizations but also integral to the structure he constructed for awakening: the sangha.

Over the last decade or so, white sanghas, particularly in the U.S., have recognized the need to diversify; however, they tend to do so while still ensuring that white people, and the cultural ethos they generate, remain central. Buddhist pioneers in the West, including many white teachers, generally feel a duty to faithfully pass on their understanding of the forms and teachings they received. However, when this veers into rigidity and a sense of ownership of the dharma, it undermines inclusivity, and a sangha can devolve into fixed relationships of patronage that are innately disempowering. Ultimately, hierarchies that perpetuate white and male entitlement weaken sup-port for an awakening process that doesn’t just transcend conditions but also reflects equity in line with how the Buddha envisioned and developed his sangha.

In response to our times, we have the opportunity to avoid replicating oppressive racist and sexist systems in our dharma communities. Essentially, we are called to a journey that requires “leaving the master’s house,” a term familiar to African Americans, coined by Caribbean American writer and civil rights activist Audre Lorde. It’s a term we as white people should now consider. It describes perfectly the construct of systemic power, which is further defined by bell hooks as “imperialist, white, supremacist, capitalist patriarchy.” This power paradigm is woven into the institutions that shape society, the economies we live within, the opportunities afforded to us or not, and the quality—and even length—of our lives. In essence, it forms the very core of how we experience ourselves. And it shapes our sanghas.

Lorde’s statement “The master’s tools will never dismantle the master’s house” can be our koan. How do we deconstruct our racially conditioned self when we only see through its limited prism? Perhaps we begin with “I don’t know.” Not “I don’t know” as an excuse but rather as the willingness to unlearn racialized condition-ing in order to hear something else.

Sometimes when we leap to be white allies, we do so from con-fused motives. We want to feel better about ourselves. We count on our Buddhist niceness, our intellectual understanding, political correctness, and willingness to challenge authority to alleviate an uncomfortable strain. But when we shift quickly from insecurity to expedient solutions, strategies, and quick fixes, we end up perpetuating the root problem. We want the “other” to feel comfortable so we can be comfortable. Often we do this by asking people of color to settle for compromise rather than the radical realignment we know needs to happen. We want a diversity that populates our white world, our Buddhist institutions, and our hallowed practice paths— but without too much impact.

Don’t get me wrong. The focus on diversity, the trainings, dialogue, and inquiry, and the cultivation of white allies—these are all vital. But they point to a greater potential: a paradigm shift that would decentralize power, dismantle patriarchal hierarchy, and decolonize the mind, heart, and body of sangha. Such a process would transform the styles of practice that white Buddhists have deified and are comfortable with.

When dharma practice focuses primarily on individual efforts, the wound of historic racism gets configured as a personal failing rather than acknowledged as a collective responsibility.

It would also demand a high degree of self-honesty, which is hard. Fortunately the teachings offer a way through that is insightful and compassionate. Seeing self through the lens of non-self helps us understand that white supremacy is a conditioned construct that diminishes everyone. The Buddha articulated his enlightenment as the deconstruction of the house of self: “Your rafters have been broken down; your ridgepole is demolished too.” In these times, it’s important that the journey of deconstruction be undertaken not just as a personal practice but also as a collective process.

As Buddhism undergoes adaptation in the West, predominantly white sanghas tend to promote a rational Eurocentric view as superior, and therefore dominant, without much thought to the consequence. This keeps white Buddhists comfortable in the “master’s house” where, alongside internalized racial prejudice, we assume a norm that becomes standardized in the forms, views, and practices we feel represent a truer Buddhism. While this makes sense for much of Western secular society, it may not for cultures that inhabit a collective, and therefore relationally felt, experience of self rather than a strongly individuated and rational one. When dharma practice focuses primarily on individual efforts, leaving out the impact of systemic inequity, it reinforces internalized oppression. This means the wounding of historic racism gets configured as a personal fail-ing rather than acknowledged as a collective responsibility. It leaves people of color with levels of suffering and struggle that white teachers don’t see, misinterpret, or even dismiss.

In the same way that a Buddhist male monastic hierarchy cannot authentically shape what a nuns’ community should look like, so white Buddhists cannot be the ones to shape a sangha that doesn’t privilege whiteness. This doesn’t mean that white teachers and sangha members don’t have a role to play. Where appropriate, and regardless of race, the weight of experience and realization should have influence. There is, however, a fine balance here.

In establishing the processes and rules of sangha, the Buddha taught both community consensus and attunement to elders. But length of time in a sangha or visibility as a popular or charismatic teacher doesn’t necessarily translate into freedom from racial bias. On the other hand, challenge from a white male teacher is not always racist or sexist. Often, there is a core confusion that plays out in dialogue across race. Whites tend to take critique personally, while people of color may interpret critical comments as part of a racist agenda.

There is a dynamic between those who have the power to shape systems and those who do not but who still have to survive in them, even as their experience remains invisible. This generates blind spots for those who are privileged and strife for those who are marginalized. The onus is on white Buddhists (and those in dominant groups) to educate themselves around how experience is perceived and interpreted differently due to racial, cultural, gender, and class conditionings. [See Charlene Leung’s article on cultivating cultural humility.]

We can’t expect this work to be comfortable, but we need not dread it or think something has gone wrong because the controlled, peaceful spaces we associate with Buddhism are dislodged. Instead, bewilderment, heightened emotions, indignation, misunderstandings, resentments, blame, and accusations, whether true or not, are signs that something authentic is happening. As centuries of injustice and distorted conditioning are unpacked, how can it be any other way? And in any case, why should white patriarchal sanghas maintain their comfort zones, their controlled calm spaces, while others who are marginalized struggle as the direct result of those in the master’s house refusing to authentically share or give over power?

Ajahn Chah said, “True but not right, right but not true.” Wherever we are in the spectrum of this dialogue, when we take fixed positions we miss something essential, which is the territory of the unbiased heart that relinquishes identification with any self-view. Ultimately, this is the only space where real freedom lies. Aligned with that, we realize something true and liberating is happening: the deconstruction of white, patriarchal, hierarchal Buddhism is answering the imperative of the heart that rejects the agony of divi-sion. A root cause of suffering is the heart dividing against its deeper alliance with all beings. When we cease this division, then, attuned to the intelligence of the living dharma, we hear a way through the tangle of delusion that perpetuates racism. Instead of staying stuck in a separatist, entitled, nonrelevant paradigm, we can proactively make bridges into a world that is calling us forward.

In my experience, this work, while challenging, generates sangha spaces that are dynamic, intelligent, creative, deeply healing, and optimal for realizing our innate potential. Together, we have a chance to construct a different kind of sangha house, one that sup-ports a truly equitable ground for awakening—for all.

Thanissara (Mary Weinberg) was one of the first women to be ordained in the West as a nun in Ajahn Chah’s Forest tradition, initially as a mae chee (eight-precept nun), then as a nun in the siladhara order, based on the ten-precept ordination. She left the order after twelve years. She is director of Dharmagiri Hermitage and Outreach in South Africa, and a facilitator for the community dharma leader program at Spirit Rock Meditation Center in Woodacre, California.