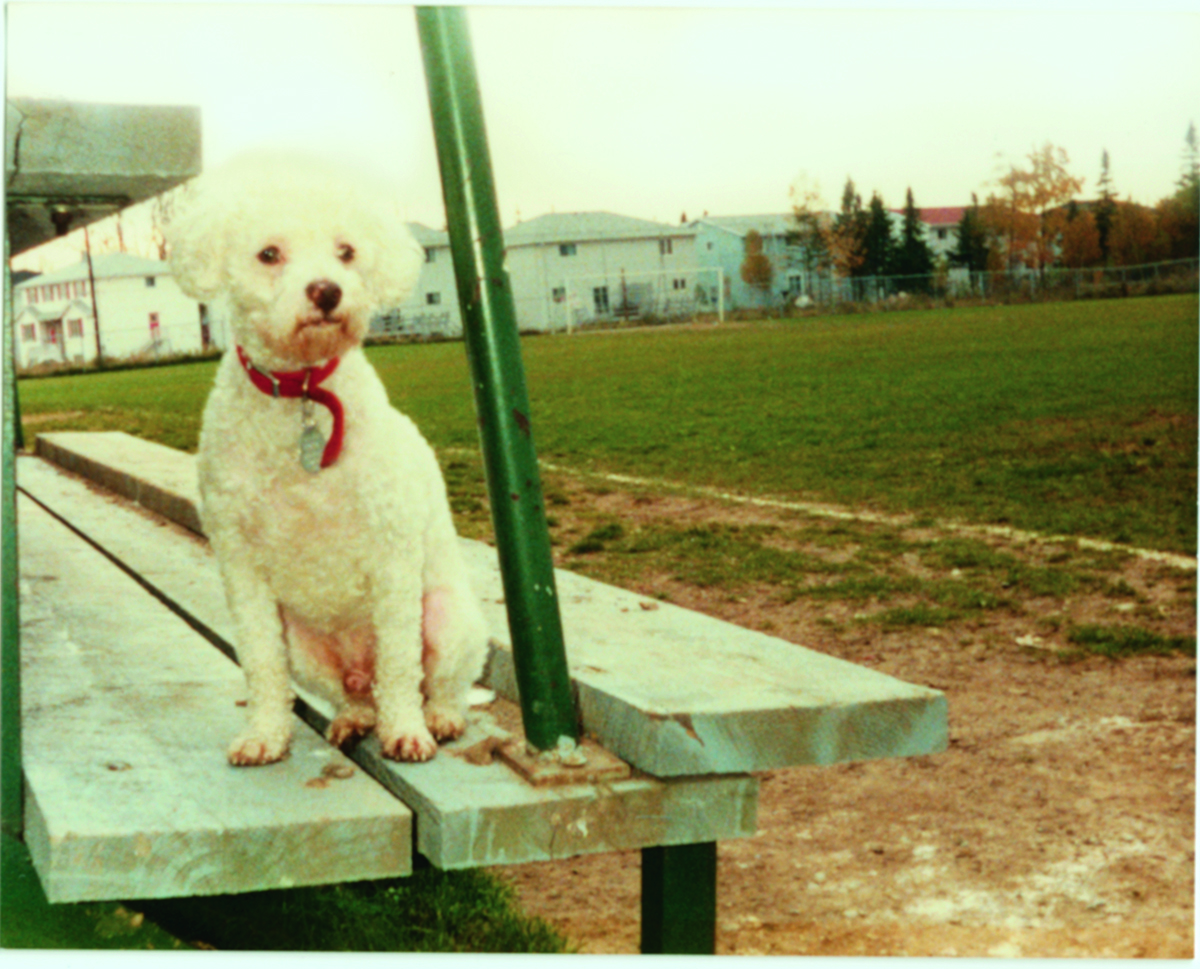 In one of the Jataka Tales, the traditional stories about the Buddha’s previous lives, there is a great black hound. This gigantic beast—as dark as midnight and with four fangs the size of plantains—has one purpose: terrifying people into right action.

My childhood dog Raffy—a white poodle–Lhasa Aspo mix—was no great black hound making the world right. And yet, he thought he was. With his surprisingly guttural woof, Raffy struck fear into anyone who had the audacity to ring the doorbell, and if the German shepherd next door stepped a paw onto our property, Raffy ran her off. (Why did she flee from a dog less than half her size? Possibly because she was confused by the incongruity of his ferocity and lamb-like looks. Surely, he must have some nasty canine tricks up his sleeve.)

But Raffy—full name Raphael Tubs—was more than the cosmic police dog of his imagination. For me, he was something of a teacher, and he helped me see that every dog is. If you rub their bellies and scratch their ears, they give you their teachings freely.

Buddhist teachers of the human variety often assert that all beings have the same basic desire for happiness. Living with a dog takes that teaching out of the realm of the theoretical and makes real what all beings share.

We all want love. When two people hugged, Raffy would get jealous and yap. He wanted to be included in any show of affection.

We all need nourishment. As an adult, Raffy mostly ate dry dog food, but no matter where he was in the house, he came running if someone took cheddar out of the fridge. Raffy did not care for bacon and was polite enough that even if you put roast beef on the floor, he wouldn’t go near it unless you invited him to. (He was very keen to receive such an invitation.)

We all want to be safe. If Raffy felt like he was in danger, such as whenever he was in a room where there was a man wearing a hat, he always barked furiously. Raffy, like so many of us, had a tendency to lash out if he felt insecure.

We all want to be warm and dry. Raffy would not go for a walk when it was raining hard. His little green coat did nothing to change the situation.

I don’t know anyone who shares a bed with an octopus, or who is greeted daily at their door by a wombat. Unlike almost any other animal, dogs live happily and intimately with humans, so dogs can be our door to understanding that all sentient beings have the same essential wants and needs. If we are open to understanding that all beings suffer and that all beings want to be happy, our compassion deepens and widens. This is the compassion chain: from dog, it’s no great leap to wolf, and from wolf it goes to fox to weasel to bobcat, and on and on.

Yet not everyone is willing to see that all beings suffer and all beings want happiness. Even a lot of people with a canine teacher curled at the foot of the bed don’t want to admit that dogs have so-called human feelings; they believe this anthropomorphizes them.

But I am not anthropomorphizing. Let me assure you, Raffy was decidedly a dog. He loved gnawing on bones and sticking his head out the car window, the wind blowing back his ears. Moreover, unfixed, he was a complete horn dog, keen to hump male dogs, female dogs, and stuffed animals. Once (oh, the horror!) he even tried to mount a human baby who’d just learned to crawl.

Raffy’s dog-ness brings me to that most famous of doggie questions, the first koan in the Gateless Gate collection and the first koan that’s usually given to Zen students:

A monk asked Joshu, “Has the dog buddhanature or not?”

The monk must have been familiar with the Buddha’s teaching that all creatures have buddhanature, but intellectual familiarity doesn’t mean that he had actually realized the truth of it. Doubting a dog’s buddhanature was of a piece with doubting his own. After all, if a dog’s dog-ness makes it too base for buddhanature, then surely our humanness makes us too base as well.

Not in the business of debate or philosophizing, Zen master Joshu gave the monk a stripped-down response: “Mu,” meaning, literally, no thing, nay, or no. Linguistically, a complete negative.

But that doesn’t make sense! The response was contrary to the Buddha’s teachings: we all have buddhanature. So how to make sense of it? Don’t use intellect; forget that big human brain.

“If,” said the late American Zen teacher Robert Aitken, “you are preoccupied with ‘has’ and ‘has not,’ that is, if you cultivate thoughts about attaining something, you cut off your head, or rather you cut off your body. You cut off the whole world. Preoccupied with brooding, fantasy, memory, or whatever, you are unable to hear the thrush in the avocado tree.”

Rinzai master Koryu Osaka (1901-–1987) put it another way: “Mu itself is the buddhanature, and when you thoroughly make this your own, in that moment, you realize what you are. If you fall into the sphere of dualism, even just a little bit, then you lose sight of it, you completely lose the total of this koan.”

But Raffy did not grapple with koans. He had no need. He had already realized his true doggy nature.

My mother would dedicate Saturday afternoon to bathing him with blueing shampoo and blowing him dry. Then, almost immediately, he’d slip into the backyard where there was a lake—a cool inviting mirror of water—and he would plunge right in, ruining his freshly clean coat. Raffy lived in the moment. When chasing a ball, just chase. When barking at the TV, just bark.

And moment by moment, Raffy changed. That was his final lesson: everything is of the nature to change. Impermanence, according to the Buddha, is one of the marks of existence, and dogs don’t generally live as long as humans, so loving them is a teaching.

When he came into my life, Raffy could fit in my hands and his nose was pure pink. Over time, he went from very small to not as small, and his nose went from pink to marbled pink and brown, and then finally to pure brown. He got liver spots. He lost an eye to cancer, and eventually he was diagnosed with a cancer that couldn’t be cured.

When I was twenty-three and about to move to Japan for a year, I took my time one day holding and petting Raffy. I knew that he was old and might not be alive by the time I got back. As it turned out, I was right. Raffy was put down while I was away.

My mother snipped off a lock of his fur for me to keep and then she buried him in the far corner of her property. Later, she realized that she didn’t actually own that land; a neighbor did. Briefly, she considered digging Raffy up and moving him, but then she decided that he was exactly where he was supposed to be. In life, Raffy loved bolting off and exploring every yard and road and wild space. It’s fitting that, even now, he still cannot be fenced in.