The yoga teacher’s instruction was not to think of anything, but what do you do when pushing thoughts away just makes them get bigger? John Kaag on looking the elephant of pain squarely in the face. 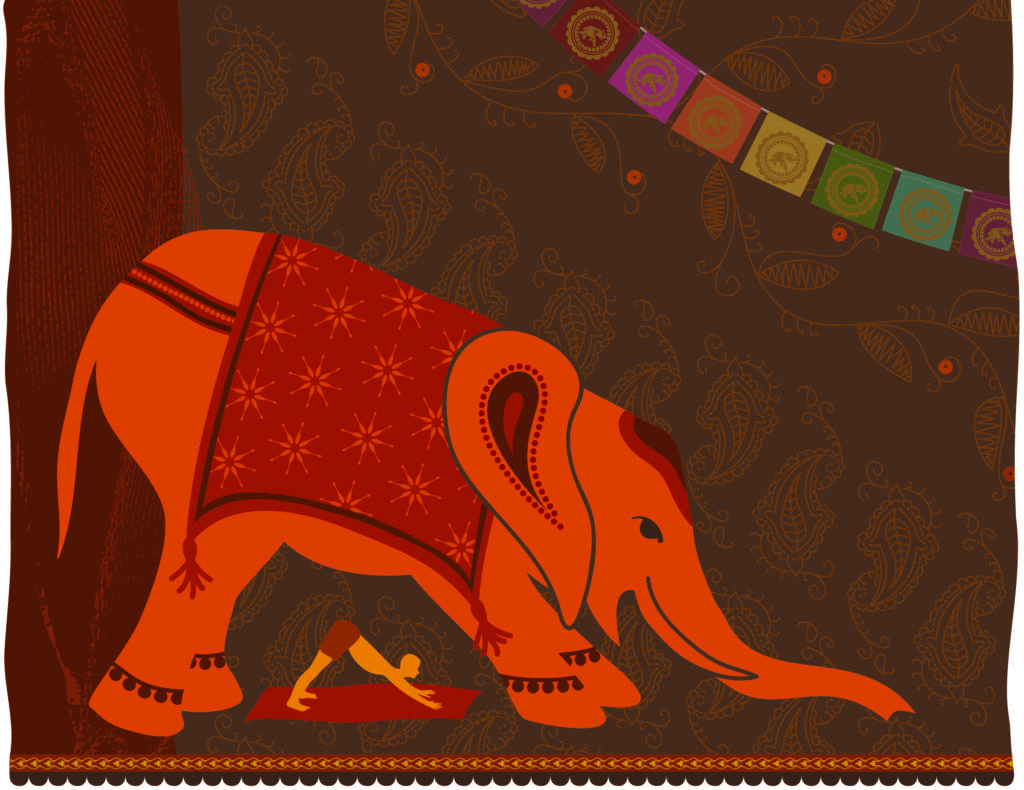 “You should do yoga,” my friend told me. “It really helps with anxiety.”

You know what actually helps with anxiety? Not listening to people who make you anxious. Of course, I didn’t say this to my friend. I was too busy pretending to listen to her. Unfortunately, it wasn’t as easy to block out the internal dialogue between I and me that had begun when I was six or so. I was the one who made me really anxious.

So I and me went down to the yoga studio the next day.

We both thought it was absurd.

The little room was not dark enough to conceal that it was filled with scantily clad women — and a few guys who had obviously come for the scantily clad women. I spent the next thirty minutes trying to convince myself that I was not one of those guys. We were instructed to breathe deeply, but I kept choking on the incense that was burning at my feet. We were instructed to sit quietly — to touch our toes, to make butterfly wings with our legs, to sit cross-legged — while a mixture of world music and hipster pop kept us company. The music was pretty good and I started to sing along — to myself, of course — though I suspect that the slight beating of my dancing butterfly legs gave me away. Perhaps the instructor disapproved because the music suddenly faded out.

Don’t think of the elephant!

That was enough. I and me came to a rare moment of agreement: “Get out of here!” And I listened. As it turns out, it is not customary to leave in the middle of a class, and certainly not customary to slam the door of the studio behind you. I really hope the racket didn’t interrupt anyone’s journey to enlightenment.

I had not suffered through ten years of philosophy only to have a yoga teacher tell me that I needed to find God. So I left. And slammed the door.

I took me and my petty worries to the gym. When I was thirteen I had discovered that I could reliably beat my worries into temporary silence with heavy weights and excessive running. Not eating also tended to help. Hungry worries are generally not as talkative. But today they were. They told me that I had been cruel and unfair to that man in the sarong — that I had failed, and failed at something pathetically easy. What was easier than “just being”? I was a failure at existence.

This came as no huge surprise, but I was a little upset that yoga had to reiterate the obvious.

For most anxious people, being “a little” upset is only a temporary state of affairs. For me, it usually turns into “moderately” or “extremely” or “uncontrollably” upset. I couldn’t stop thinking about that man in the sarong or that incense or about that stupid elephant. For the next three years, I intentionally avoided walking past yoga studios, but those scantily clad women were everywhere. Just everywhere. I dreamed of telling them that they were not wearing pants, firebombing their Lululemon, and using their yoga mats as pastel pugil sticks on that man in the sarong. Deep down, I knew I was just jealous. Somehow I knew that they had, with surprisingly little difficulty, achieved the uncanny state of “no mind.” The thought that some people have a head start in this pursuit provided little solace as I lay awake with the thought of my elephant.

With the elephant came all the other things that I wished I could ignore: an unhappy relationship, the death of a negligent father, a lack of friends, a compulsive desire to be perfect.

And that elephant seemed to grow larger and more menacing by the day. I say seemed because I had some vague understanding that the beast’s size didn’t change, but appeared to grow larger by virtue of its steady approach. Yes, it was after me. It was that type of elephant, the type that we find in the Mahabharata (Stri Parva, Section VI) that is as ominous and unstoppable as the passing of time. With the elephant came all the other things that I wished I could ignore: an unhappy relationship, the death of a negligent father, a lack of friends, a compulsive desire to be perfect. I knew that my bed was not big enough for me, my elephant, and everything it brought with it. So I usually wound up on the couch — awake, hating that man in the sarong.

On one of these nights, I did what any highly competitive insomniac would do. I surfed the Internet for “yoga poses.” According to Google, they had some pretty catchy names: scorpion, firefly, warrior. This didn’t shock me. (It was probably a marketing gimmick.) What set me back was the difficulty of actually doing these poses. Laugh. Go ahead. But you try standing on your hands and touching your toes to your head—at the same time. I did. I broke the coffee table in the attempt, but for one shattering instant I managed not to think about the elephant. And this began my love affair with yoga. With the assistance of the wall I could sort of manage the poses, but they were still hard enough that I did not have time to do them and also fixate on the approach of my floppy-eared nemesis. This being said, I suspected that I looked nothing like the yogi on the Internet and that using the wall was generally frowned upon by the man in the sarong.

And I hate being frowned upon.

Despite our best efforts, life is still the excruciatingly painful process of dying. Given that ignoring or masking the pain isn’t a sustainable strategy, we would be well advised to accept it, or more accurately to own it

Actually, that isn’t quite true. I had grown accustomed to being a failure, or at least thinking of myself as such. There is a peculiar kind of security in knowing that you will always feel inadequate. Welcome to purgatory. You can always do better. Stretching, straining my forehead toward my distant shins, I came to understand this with a new sense of clarity. Yoga tapped into an ancient piece of wisdom, as old as Tantalus and Sisyphus: you will never get there; you will never touch those shins; you will always want to; prepare to suffer. This is what I’d missed in my first exposure to yoga, and it is what brought me back. Yoga’s newfound popularity might look like a combination of vanity and orientalism, but I suspect that it can also be traced to something that the world’s mat carriers don’t like to chat about. Despite our best efforts—Botox, Rogaine, Zoloft—life is still the excruciatingly painful process of dying. Given that ignoring or masking the pain isn’t a sustainable strategy, we would be well advised to accept it, or more accurately to own it. Small consolation, perhaps, but at least it’s something.

I decided to test my hypothesis. I eased up and the excruciating sensation in my hamstring subsided. This was, after all, my hamstring. I could ease up if I wanted to. There was a rustle in the high grass. I knew the elephant was close. No. That wouldn’t do. Again I stretched deeper. You know what those spiders felt like when you pulled their legs when you were a kid? No? Me neither, but I have an inkling. I might never touch it — that (explicative) shinbone — but at least I could really feel not touching it. The elephant could go to hell. I thought that my resolve and harsh language might scare it away. I was wrong.

There it stood: a pathetic little furry Dumbo (the elephant isn’t really that big if you take a close look), along with all the other pathetic little things that scared me in the past, present, and future. I thought to myself that purgatory was about to get a whole lot worse. But this time, I was too deep into the pose to pop out of it in order to make a quick getaway. I couldn’t just slam the door. So I paid attention to it—Dumbo and the pain in my leg. This was it? This was the “anything” that I wasn’t supposed to think about? This pain? This sorry little specimen? Okay. Okay. Okay. No problem. The elephant, like anything that realizes it’s on the verge of being ignored, walked away through the tall grass. I’m not sure what ever happened to that pathetic little fellow. I was left with the pain, but purgatory isn’t that bad. It could be worse. I could be that spider.

I think yoga suits me. Both of us seem a bit happier. I no longer cry at night when I think of the man in the sarong, and he doesn’t scare me during the day either. I think that doing these existentially honest poses could actually help me be a little more compassionate, especially where I is concerned. Me agrees, although he doesn’t like to talk feelings too much. I and me think we might have a future on our yoga mat, on our three-by-six-foot corner of purgatory.

John Kaag is an assistant professor of philosophy at the University of Massachusetts Lowell.