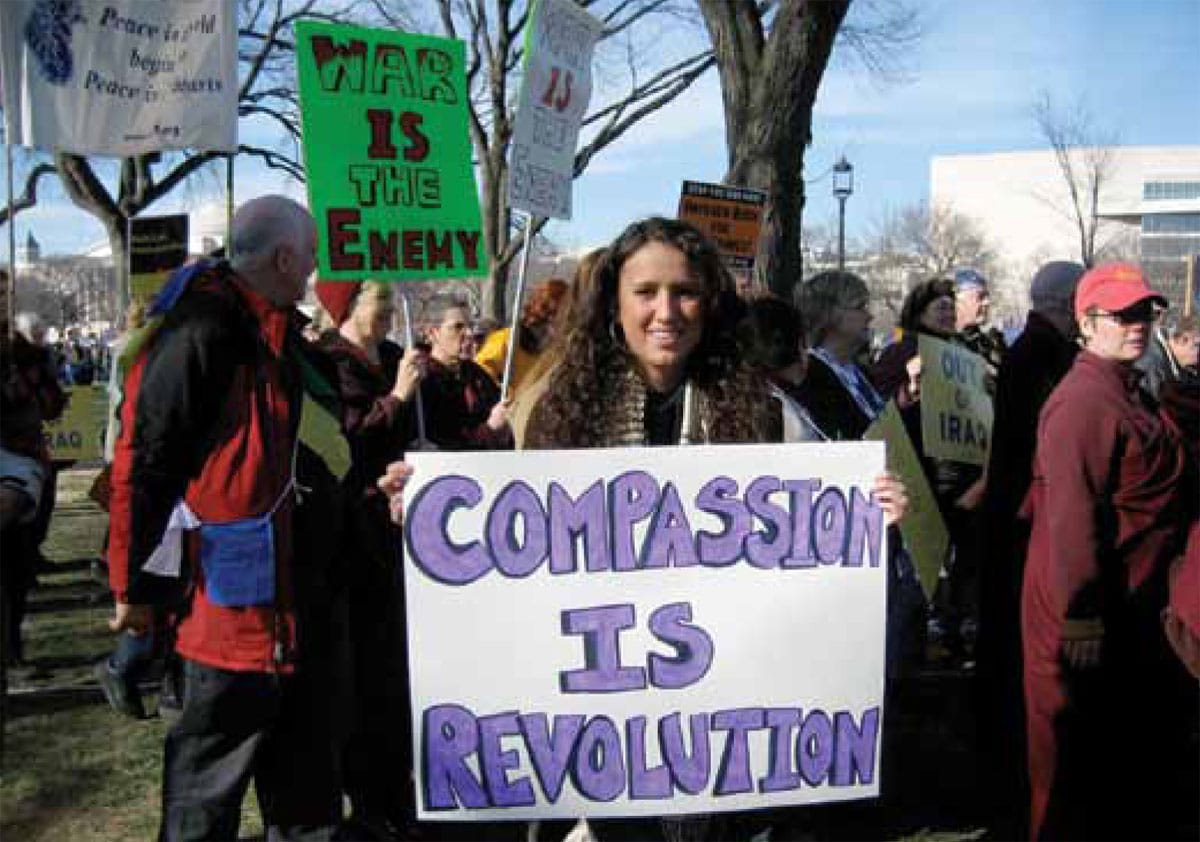 Members of the Buddhist Peace Delegation at a peace march in Washington, 2007. Photo by Maia Duerr, jizochronicles.com.

David Loy on why Buddhism’s bodhisattva ideal is what the world needs now.

Unless you’re on long retreat in a Himalayan cave, it’s becoming more difficult to overlook the fact that our world is beset by interacting ecological, economic, and social crises. Climate breakdown, species extinction, a dysfunctional economic system, corporate domination of government, overpopulation—it’s a critical time in human history, and the collective decisions we have to make during the next few years will set the course of events for generations to come.

Yet the more we learn about our situation, the more overwhelmed and discouraged many of us become. The problems are so enormous and intimidating that we don’t know where to start. We end up feeling powerless, even paralyzed.

For those inspired by Buddhist teachings, an important issue is whether Buddhism can help us respond to these crises. As Paul Hawken points out in Blessed Unrest, there are already a vast number of large and small organizations working for peace, social justice, and sustainability—at least a million and perhaps over two million, he estimates. The question is whether a Buddhist perspective has something distinctive to offer this movement.

Historically, churches and churchgoers have played an important part in many reform movements; for example, the antislavery and civil rights campaigns. But much, perhaps most, of the impetus in the West for deep structural change originates in socialist and other progressive movements, which traditionally have been suspicious of religion. Marx viewed religion as “the opiate of the people” because too often churches have been complicit with political oppression, using their doctrines to rationalize the power of exploitative rulers and diverting believers’ attention from their present condition to “the life to come.”

This critique applies to some Buddhist institutions as well—karma and rebirth teachings can be abused in this way—but at its best, Buddhism offers an alternative approach. The Buddhist path is not about qualifying for heaven but living in a different way here and now. This focus supplements nicely the customary Western focus on social justice and social transformation. As Gary Snyder put it half a century ago, “The mercy of the West has been social revolution. The mercy of the east has been individual insight into the basic self/void. We need both.”

We need both because when we do not acknowledge the importance of individual transformation, social transformation is repeatedly subverted by powerful elites taking selfish advantage of their position. Democracy may be the best form of government, but it guarantees nothing if people are still motivated by greed, ill will, and the delusion of a self whose well-being can be pursued indifferent to others’ well-being.

We need both personal and social transformation so we can respond fully to the Buddha’s concern to end suffering. The Buddha emphasized that all he had to teach was suffering and how to end it. This implies that social transformation is also necessary in order to address the structural and institutionalized suffering perpetuated by those who benefit from an inequitable social order.

Is there something specific within the Buddhist tradition that can bring these two types of transformation together in a new model of activism connecting inner and outer practice?

According to the traditional definition, the bodhisattva chooses not to enter the state of perfect peace, nirvana, but instead remains in samsara, cyclic existence, to help all sentient beings end their suffering and reach enlightenment. Instead of asking, “How can I get out of this situation?” The bodhisattva asks, “What can I contribute to make this situation better?” Today, more than ever, we need to understand the bodhisattva path as a spiritual archetype that offers a new vision of human possibility.

Wisdom and compassion are the two wings of the Buddhist path, and we need both to fly. Wisdom is realizing that there is no “me” separate from the rest of the world, and compassion is putting that realization into practice. Although not a Buddhist, the neo-Advaitin Nisargadatta made this point very well: “When I look inside and see that I am nothing, that’s wisdom. When I look outside and see that I am everything, that’s love. Between these two my life turns.”

The vision of socially engaged Buddhism is to help develop an awakened society that is socially just and ecologically sustainable. It seeks to open up new perspectives and possibilities that challenge us to transform ourselves and our societies more profoundly. This brings us to the bodhisattva’s path as a new archetype for social activism.

Bodhisattva activism has some distinctive characteristics. Buddhism emphasizes interdependence (“We’re all in this together”) and delusion (rather than evil). This implies not only nonviolence (which is usually self-defeating anyway) but a politics based on love (more nondual) rather than reactive anger (which separates us and them).

The basic problem in our society is not rich and powerful bad people but institutionalized structures of collective greed, aggression, and delusion. The bodhisattva’s pragmatism and nondogmatism can help cut through the ideological quarrels that have weakened so many progressive groups. And Buddhism’s emphasis on skillful means cultivates the creative imagination, a necessary attribute if we are to construct a healthier way of living together on this earth and work out a way to get there.

Yet those attributes do not get at the most important contribution of the bodhisattva in these difficult times, when we often feel overwhelmed by the magnitude of the challenge and are tempted to despair. the bodhisattva’s response? To quote the U.S. Army Corps of Engineers: “The difficult we do immediately. The impossible will take a little longer.” According to the classical formulation, the bodhisattva takes a vow to help liberate all living beings. Someone who has volunteered for such an unachievable task is not going to be intimidated by present crises, no matter how hopeless they may appear. That is because the bodhisattva practices on both levels—inner and outer—which enables one to engage in goal-directed behavior without attachment to results.

As T. S. Eliot put it, “Ours is in the trying. The rest is not our business.” The bodhisattva’s job is to do the best one can, without knowing what the consequences will be. Have we already passed ecological tipping points and human civilization is doomed? We don’t know. Yet rather than being intimidated, the bodhisattva embraces “don’t know mind,” because Buddhist practice opens us up to the awesome mystery of an impermanent world where everything is changing, whether or not we notice it. I grew up in a world defined by a “cold war” between the U.S. and the Soviet Union we all took for granted—until communism suddenly collapsed. The same thing occurred with South African Apartheid. If we don’t really know what’s happening, how do we really know what’s possible, until we try?

The equanimity of the bodhisattva-activist comes from non-attachment to the fruits of one’s action, which is not detachment from the state of the world or the fate of the earth. What is the source of this nonattachment? That question points to the fruits of the bodhisattva’s inner work. The Diamond Sutra says that we save all living beings by realizing that there are no living beings to save. The bodhisattva realizes shunyata, emptiness—that dimension in which there is nothing to gain or lose, no getting better or worse—but is not attached to that realization. As the Heart Sutra emphasizes, forms are empty, and emptiness is form. Emptiness is not a place to dwell that is free from form; it is experienced only in the impermanent forms it takes, the forms that constitute our lives and our world.

For the Buddhist activist, these are the two dimensions of practice—form and emptiness, personal transformation and social transformation, opposite sides of one coin. As Nisargadatta might put it, “Between these two the bodhisattva’s life turns.” Our world needs both.