After years of painful struggle to fit in, Yenkuei Chuang decides to stand up for her identity, her anger, and the heritage of Asian American Buddhism. She will resist erasure. 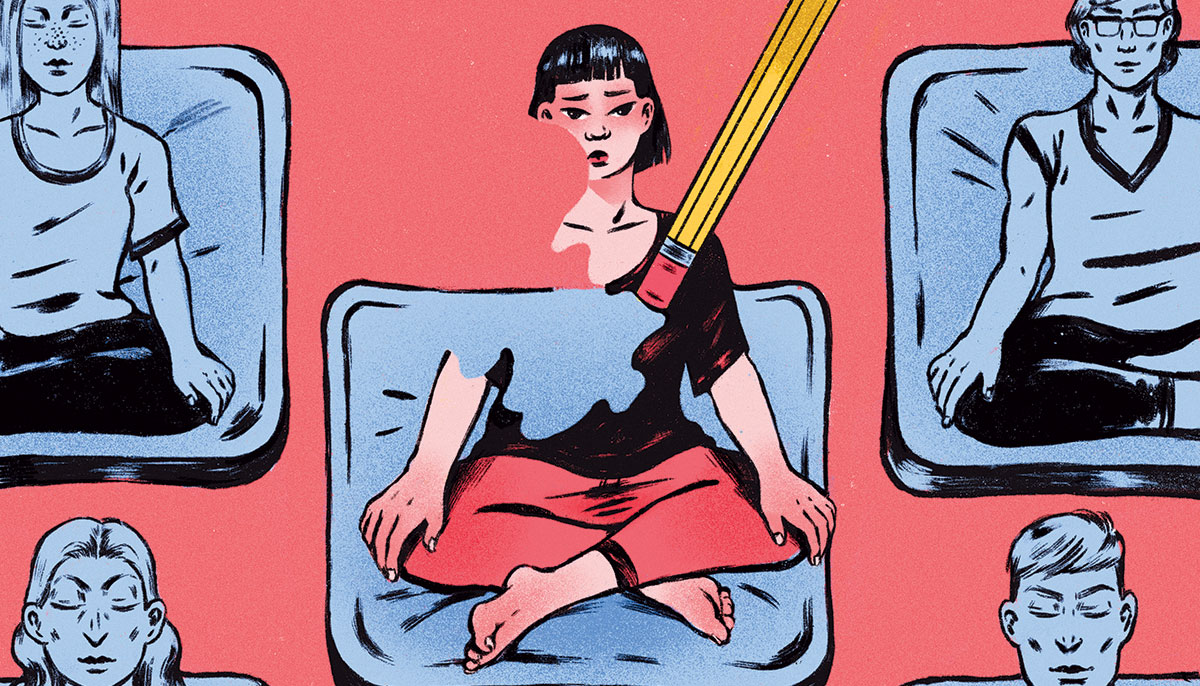 This time it happened at the silent retreat. Even the know-it-all didn’t know it all. Even the big people falter. Even the teachers.

It is so easy to surrender my intelligence to them, my own knowing to theirs. Smile and say, yeah, like I don’t know.

Just like when I was a kid. Smile, and drop the grammatically correct English that newly arrived immigrants speak. If I want to fit in, if I want to be American, I gotta drop the intelligence. Pretend I don’t know. Numb the mind and learn to say I don’t know.

Forty years ago that felt demeaning, and it is happening again at this class for experienced meditators. A student just commented in front of the whole class that we have much to thank the community’s founder for, because he invented Buddhism in the U.S. “Oh, I meant he brought Buddhism to the U.S.,” the student quickly corrected herself.

I woke up to the Buddha leaving my heart, and I said, No, stay. Stay awake to the knowing, because I do know when a comment is exclusive and harmful.

Buddhism wasn’t invented or brought over to the U.S. by him or any of the other white stars of “convert Buddhism.” What about the Asian folks from generations ago who came to build the transcontinental railroads and grow crops? What about the Buddhist temples that they built and attended long before white Americans discovered Buddhism in the sixties? To be accepted as proper places of worship, the Buddhist temples had to be renamed as churches, but these pioneers were the first to seed Buddhism in the U.S.

I looked at the teacher’s face. How would she respond to this student’s comments? Her face appeared pleasant, light, and calm; her head bobbed gently up and down as if in approval. Student and teacher linked to each other in mutual appreciation of this false narrative that Buddhism was brought over by their white elders. How could it be so easy for white folks to take over another culture’s goods and call it their own? Didn’t we agree on the precept of not taking what is not given?

I felt shut out, obliterated by this mindless act of white supremacy—an insensitive remark that was at once unintentional but utterly disrespectful. How could my beloved sangha be so clueless?

As seconds ticked by without anyone challenging this remark, disbelief turned into doubt. Did I get it wrong? Am I making too big of a deal? Shame and anger boiled over into rage. Aawwwwwwuuuuggghhh.

I didn’t smile, but I didn’t speak either. I sat and I stayed, heat inching up the back of my neck onto my naked face. Feelings of anger, hurt, disbelief, and rejection singed my cheeks.

Eventually my breathing slowed and my heart no longer pounded. Skin, flesh, face cooled. I sat still like all the other sixty-some meditators in this dharma hall. None of them—95 percent of them white—questioned the truth of what was said. Please note: it was no longer 95 percent of us white. With one swift comment, the class was sliced apart. It had become us vs. them. Colonization was re-established, and white supremacy reaffirmed.

Though I stayed, my heart was bruised. Betrayed by my beloved teacher. Erased by the class’s silent complicity that Buddhism was brought over by their white founding father, just like America was founded by Jefferson and Washington. This land is their land. There is no room for an Asian American woman who thinks otherwise. I got quiet. Real quiet. Silence befitting a proper meditator and a good team player. Remembering to tuck away what made me different. Safety first.

But it was a precarious safety. Though seemingly peaceful and quiet on the outside, there was no resolution or rest for this heart within. I have to carry the weight of relentless invisibility no matter what day of the week, what time of the day. I wear the face of the Other, and I live in the history of the Other. They need me to be their token diversity yogi, employee, and student. They need me to make the minority quota and rewrite their history as one that is inclusive and nonracist. Yet, they continue to mark my Asian features as foreign. No matter how long I or my ancestors have lived in this country, I am still asked to speak about my culture.

None of the other sixty-some students will recall that moment, because nothing had disrupted their knowing. No one will believe that it was an act of cultural appropriation or an assertion of white supremacy. A few days later when I brought up this incident with the teacher in a private one-on-one interview, she said it was a benign comment. She explained in her light-hearted way: “Oh I know her. She meant no harm. She’s sweet, sincere, and a very kind long-term yogi.”

“Well, really she meant no harm. Don’t worry about it. Oh, but do speak up next time. I know you can do it.”

Apparently, I am to believe that what I felt to be harmful was not. I am to believe that who I felt to be accountable was not. No way could it have been white supremacy in action. Silly me. The table turned, and now it was my fault for disrupting the status quo and up to me to correct the wrong. The teacher looked to me to fix it: speak up next time. You can do it. But no, that’s not how I see it. It’s not my responsibility.

So what do I do? Run. Gotta run. Run away to a safe place!

Have I been found out? Do they know what I truly think? Here now at a different meditation center, they just denied my request for a POC (people of color) space to sit within this silent retreat. Should I not have mentioned anything? Have I betrayed the establishment? If they know that I do not see myself through their lens, what will happen? Will there still be a place for me?

I can’t be found out. I can’t be seen as a troublemaker. They must believe that I am one of their own. I want to belong, but at what costs? To assimilate, I must internalize the master’s tools, and I must be re-educated to protect their ethos. To survive, I must blend in, and that means erasing my different ways of thinking if they don’t serve the master. Or at the very least, I should keep them to myself.

But this pain of separation is harsh and forever present. How will I hold this truth that is different from the majority’s? Would it be easier to forget? Who else holds this double truth? African American scholar W. E. B. DuBois called it “a peculiar sensation, this double-consciousness, this sense of always looking at one’s self through the eyes of others.”

When I spoke about feeling ill at ease and alienated from community, another highly regarded white dharma teacher advised me: “It’s all conditioning. Just meditate and look deeply into those conditionings. Can you see it another way? Be free now. We see you as one of us, and we welcome you into our fold.”

While I appreciated her generous attempts to include me, I did not feel understood. I think she saw me as white like her. She could not sit with my distress, and she could not fathom how certain conditions at the retreat could lead to my feelings of loneliness and isolation. Once again, the responsibility was mine—to sort through my conditioning and cut through my delusion of separateness.

It wasn’t until I began sitting with a POC sangha that I felt seen finally and fully for having a skin color, a minority experience, and a double consciousness. I was not alone and my stories not uncommon. A sense of relief poured over every cell of my body as I began to hear other voices of marginalization, invisibility, accommodation, injustice, rage, and loss. I cried. I smiled. I felt. I knew. I relaxed. I am safe, and I am home.

At another silent retreat, this time it stopped. I resisted erasure. I woke up to the Buddha leaving my heart, and I said, No, stay. Don’t flee. Stay awake to the knowing, because I do know when a comment is exclusive and harmful. I can’t assume that the teachers understand and take care of it. I can’t keep giving up my wisdom.

This time it stopped at a joke that I didn’t get. Instead of smiling along as if I knew what was going on, I stopped pretending. I asked for an explanation. I am entitled.

This time it stopped when they did not respond to my question. I stopped pretending that it didn’t matter or that I didn’t notice their disregard. I repeated the question louder because I cared.

This time it stopped when the white male teacher put his arms around me and said: “May I give you a hug?” I felt the twisted pressure to accept his well-intended gesture, he who had such eagerness to support the POC folks. But the hug positioned him as the powerful and me the powerless. I stepped away: “No thanks. I’m all right.” I did not need to appease him. Not my story to play the weak female minority and take care of his ego.

This time it stopped when I was asked to teach at a new program, and I said no. I did not need to add another commitment just so I could feel important.

This time it stopped when I almost ignored a request to support a LGBTQIA+ group. As a cisgender woman of Asian descent, I thought: What do I have in common with this group? Why would I care about a group that I did not identify strongly with? Maybe someone else could make the donation.

Noticing my perception of difference and apathy, I gasped. Ouch! It doesn’t have to be this way. These attitudes of Othering tighten my heart. I don’t want to turn away. I already know from years of personal experience how it feels to be excluded, marginalized, and objectified. Breathing with the dukkha of erasure, knowing its insubstantiality, my body and heart softened. Separated no more, I am delighted to connect.

This time it stopped when I was no longer embarrassed by my pronunciation of certain English words. No need to apologize. Not me.

This time it stopped when I did not explain why I needed to take space.

I am here, and I belong.

Yenkuei Chuang, PhD, is a therapist and mindfulness instructor. She is currently writing a memoir entitled Blood, Sweat, and Dharma: A Memoir on Learning to Stay.