Buddhadharma editor Tynette Deveaux talks to Buddhist Extinction Rebellion (XR) activist Mark Ovland about his decision to join the XR movement and why he feels it’s aligned with the dharma. 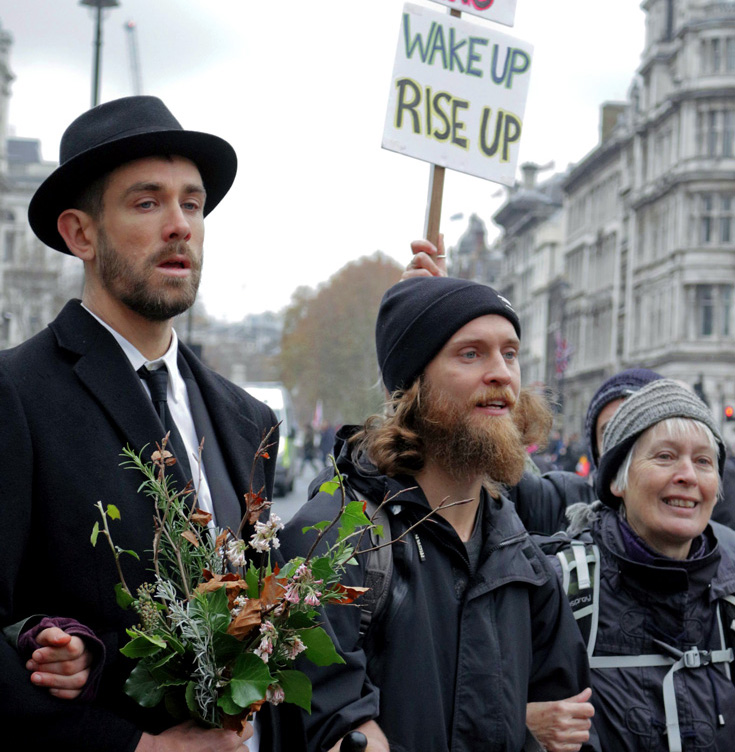 Mark Ovland left behind his Buddhist teacher training earlier this year to join the Extinction Rebellion (XR) movement as a climate activist. Monday, October 7 marked the beginning of a two-week campaign of action by XR in 60 cities around the world, and I spoke to Ovland just days before the protests began.

When we spoke, police were preparing to raid the XR warehouse in London, where the group was storing equipment for their demonstrations. Ovland said police had blocked every road out, and were arresting anyone trying to get things out of the warehouse, including solar panels, portable toilets, and kitchen equipment.

Police used a battering ram to break into the building after activists barricaded themselves inside, and 10 people were arrested for “suspicion of conspiracy to cause public nuisance.” Hours after the raid on the XR warehouse, the group says it received £45,000 from the public to replace items confiscated by police. Nearly 300 people were arrested in London during Monday’s protests.

Ovland and I spoke about his decision to join the Extinction Rebellion movement and why he feels it’s aligned with the dharma.

Tynette Deveaux: Can you tell me about your Buddhist practice?

Mark Ovland: It all started in India about 12 years ago when I became a Hindu monk for a year. When it was over, I found myself back in England on the doorstep of Gaia House, which is the main center for Insight Meditation in the UK. I found a teacher there — the resident teacher Rob Burbea — and I was immediately struck and thought “Here’s someone I can really learn a lot from.” For the last 10 years I’ve been based in and around Gaia House living and serving there under Rob’s guidance.

Now that you’re involved with Extinction Rebellion, I gather that it’s become a full-time job for you. What has this movement and the sacrifices you’ve made meant for you over the past months?

I decided in February to leave my teacher behind. I was in teacher training with the Insight tradition and I walked away. It felt like the call to direct climate action was a more urgent way that I could be of service to the world. I made a clean break from everything I was doing so I could give myself 100 percent to XR.

When you’re really thoroughly aligned with your deepest beliefs, passions, and the cause, it just feels so good.

In terms of sacrifices, I’m not sure I would use that word. I feel that when you’re really thoroughly aligned with your deepest beliefs, passions, and the cause, it just feels so good. The joy and contentment is just overwhelming. I’ve been on a real high for the last eight months, giving myself to this all day, every day. It feels so meaningful.

What are the principles of Extinction Rebellion and why are you participating as an activist in this movement?

I was really struck by the values and principles of XR, which have made it so easy to transition from teaching the dharma and being involved in retreats. The practice, action in the world, and values of XR are really dharmic. It seems like the natural flip side of that coin. A lot of activism can be really based in hatred and anger, but within XR there’s a strong emphasis on not blaming or shaming anyone. There’s a lot of othering in activism — it’s us and them. But XR says “No, we’re all in this together. There’s a toxic system. We can’t blame any one individual. Let’s just try and turn this around. Let’s do this together.” That’s really the backbone.

We’re not trying to put forward solutions. We want a real democracy rather than having a small political elite that we vote for once every four or five years make the decisions. We want to assemble normal people off the street that represent the UK society and then get the experts in to talk about the climate, the economy, and see what we want as a population.

From what I understand Extinction Rebellion is also committed to nonviolent civil disobedience.

Absolutely. We come from a strategic nonviolent place, which is much more likely to succeed. Social research shows that a social movement is much more likely to succeed if it’s nonviolent. A few hundred social movements have been studied and it’s shown that you’re twice as likely to bring about change if you have nonviolent discipline rather than resorting to violence. It’s really interesting to me because, probably like a lot of the people reading this, I come from a place of principled nonviolence. That’s how I like to be in the world in all matters — I don’t wish to harm anything.

In the last few weeks there were all of these incredible climate marches around the world. I think many of us felt that people were listening and change was going to happen, but then after a few days things kind of went back to normal and the press had dropped the story. It really wasn’t until Extinction Rebellion decided that they were going to begin holding further actions this week that it felt like the story came back. Is that part of the strategy?

Absolutely. Research shows that you do need a lot of people doing “unarrestable” or “less arrestable” actions such as huge marches, but you also need fewer people doing the much higher risk, punchy actions that cause a lot of disruption and make a point. The movement won’t succeed without either — they sort of feed each other.

All of the strikes around the world that are being inspired by Greta Thunberg are incredible. It moves me to tears watching people rise up and kids walking out of school. By itself, I don’t think it’s going to change anything, but it’s completely necessary. But together, with what XR is doing, really putting the pressure on those in power, that’s where we can make change.