Author Paul Garrigan tells how Buddhist monks in a Thai temple helped him to drop his drinking, and even the very idea that he was an addict. 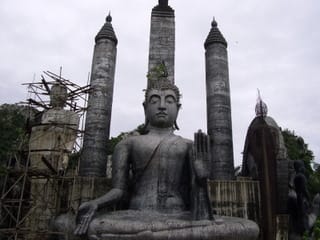 In 2006, I entered an addiction treatment program in Thailand. I did this in the hope of curing a problem that had been making my life miserable for almost two decades. I felt full of despair and saw the monastery as my last chance. That first day, I came to a decision: if the temple didn’t work out, I would make no further attempts to quit alcohol.

A liver function test I’d taken a couple of years earlier had shown there was damage. I suspected I didn’t have long left in the world. I wondered if a lot of my misery was caused by my yearning to escape addiction. If I just gave in to it then maybe I would have a few months of peace before the end.

I grew up on the south side of Dublin, mostly in Shankill. I started falling into difficulties in my teens. I attended my first addiction treatment facility at 20, before moving to England, where I spent a few years working in pubs. In my mid-20s I sank so low that I ended up begging on the streets of London.

Alcohol continued to drag me down further and further into misery. I knew I had to make a change, and I managed to stop drinking for two years. During that time I began training as a nurse, but I returned to alcohol even before my training was complete. Somehow I managed to qualify, but I was still drinking.

Alcohol continued to drag me down further and further into misery. I knew I had to make a change…

In another attempt to quit the booze I headed to Saudi Arabia, where alcohol is illegal. Instead of quitting, however, I started brewing my own hooch. After that I ended up in Thailand, in a remote country village. I’d been living in this rural area for almost five years before I heard about the temple — it was called Thamkrabok, and it specialized in treating addiction.

On my first day at the temple I was interviewed by a Swiss monk called Hans. My withdrawals had already kicked in, but I was able to tell him my story in between the fits of shaking. He began by telling me that the temple could not get me sober.

I was crushed. I thought this meant they were refusing to treat me, but he continued to talk and explained that they would help me detox and provide tools that I could use in recovery. The determination needed to quit, however, would have to come from me; they could not provide this.

Monk Hans went on to explain the temple’s theory of addiction. The monks believe that people use alcohol and drugs as a tool to help them cope with their dissatisfaction with life. In the beginning, the tool works — that is why we continue to use it — but later it just makes things worse than ever.

The Swiss monk promised me that if I got sober, I’d once again find my path, and there would be no need to drink again.

Before I could be fully admitted to the temple’s treatment facility, I had to put on a temple uniform. It looked like the sort of thing you see on convicts in the US. My clothes, money, mobile phone and passport were all confiscated. I was taken through the gates of the treatment facility into an area known affectionately as “The Hay.”

I had not been expecting anything fancy, but I was still surprised at how small and spartan it was. The biggest surprise, though, was finding that the guy in the next bed to me was a junkie from Dublin. It turned out that there were also two other people from my hometown staying at the temple.

Before I had a chance to settle in, the monks arrived to bring me to a special ceremony. This is where I was to make a vow never to drink again. This Buddhist vow is taken seriously by Thai people; if you break it, you are not allowed to take it again. That is why it is only possible to go through treatment at the temple once — there are no second chances. This idea appealed to me because I didn’t want any more chances. 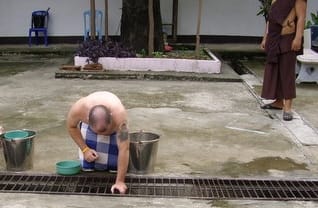 One of the unique features of Thamkrabok is that those undergoing treatment are expected to drink a special herbal concoction each evening. The purpose of this medicine is to speed up the detoxification process, but it has other benefits as well.

The most noted effect of this herbal drink is the fact that it causes projectile vomiting. We had to take it as part of a group, with a crowd of onlookers offering us their support by singing temple songs. It was surreal to say the least.

The medicine was administered by a monk as we knelt in front of him. This supplication was not so much out of respect for the monk, but rather so that we could more easily vomit into the gutter — you don’t get much warning. As soon as I drank the medicine, I had to start scooping water, drinking it as fast as I could to speed up the vomiting.

There is no doubt in my mind that this medicine does indeed speed up withdrawal symptoms. I went through treatment with people coming off heroin and even methadone, and they all claimed that their withdrawal symptoms passed quicker than usual.

For me, though, the most important element of the medicine is that it teaches humility. Addicts can be unreasonably arrogant. I ended up homeless and still looked down on everyone else.

When you are vomiting into a gutter in a Thai temple, it is impossible to lie to yourself anymore; nobody ends up doing such a thing unless they have messed up badly. So the medicine makes addicts teachable.

There are no group sessions or recovery meetings at Thamkrabok temple. It is nothing like treatment facilities in the West. Instead, you work by sweeping the temple twice a day and spend a lot of time thinking. The monks provide instruction in meditation, and they also teach you a mantra that can be used during times of high stress.

The most enjoyable thing for me was talking with the other addicts; we motivated each other. Even the most hardened drug addict or alcoholic has their dreams. We spent a lot of time discussing our hopes and fears. Every member of our little group of addicts had a low period throughout the recovery process, but we pulled each other through.

Although Thamkrabok is a Buddhist temple, there is no attempt to convert anyone to this philosophy. Many of the monks are ex-addicts themselves and have no pretensions or hidden agendas; they just want to give others the same help that was once given to them.

The treatment is also provided free of charge. Donations are gladly accepted at the end, but there is no pressure about this. Nevertheless, addicts do need to pay for their flights to Thailand, and a couple of euro is also needed to pay for food each day. Addiction treatment in Ireland can amount thousands of euro, just for a single addict.

Something happened to me at Thamkrabok. I left the temple convinced that my addiction was over. I know that addicts aren’t meant to say things like that, but it is just how I felt. I wasn’t the same person anymore. I’d not only given up drinking, but also the idea that I was an addict.

More than four years have passed since that time, and my views on this haven’t changed. The period since then has been wonderful. When there were bad times, I felt strong enough to cope.

The monks had promised me that I’d find a path in life that was satisfying; this is exactly what happened. I continue to live in Thailand, but now I have a wonderful wife and son, and I enjoy my work as a freelance writer.

Sometimes it is hard to believe that things have turned out so well. I only gave up alcohol so that the pain would stop — I’ve been given so much more.

The biggest change though has been inside my head. The turmoil and negativity I once felt have been replaced by optimism and a faith in life that it will take me where I’m meant to be.

I’m proof that change is possible, and it is never too late to start anew. The greatest gift is that I don’t even regret the past. If it all didn’t happen exactly the way it did, I wouldn’t be where I am today.

Originally published in the Irish Independent.

For more from Paul Garrigan, including information about his book, Dead Drunk – a memoir of his time at Thamkrabok and the story of how he ended up there, visit him on the web.