Buddhist leaders in New York City and around the world are warning the public to be cautious of the panhandling trend that takes advantage of the public’s image of Buddhist monks as harmless. 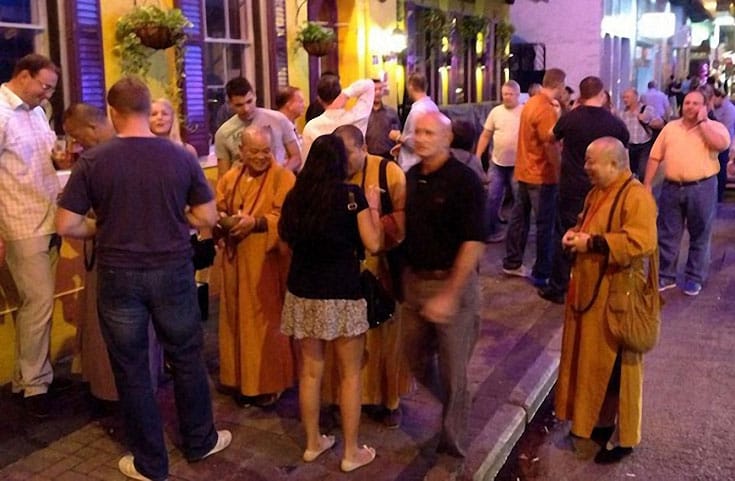 In many major cities around the world, men posing as Buddhist monks with shaven heads and monk’s robes harass passers-by for money and react angrily when confronted. According to CTV News, the problem has recently increased across New York City, particularly at tourist destinations including Times Square and the High Line public park.

Rev. TK Nakagaki, president of the Buddhist Council of New York, told CTV News the fake monks “are very aggressive and hostile if you don’t give them money.”

Last year, the panhandling monks were dubbed “holy terrors” and the “new squeegee men of New York” by the The New York Post, and according to The New York Times they are “ubiquitous” in the city. The problem grew to such an extent that Facebook pages such as “Fake Monks in New York City” were created to warn others of the issue. There have also been sightings of female panhandlers posing as Buddhist nuns.

According to multiple reports, the faux-monks approach pedestrians and ask them to sign a petition for peace before offering a medallion or bracelet and pushing for donations that will supposedly be donated to a temple in Thailand. 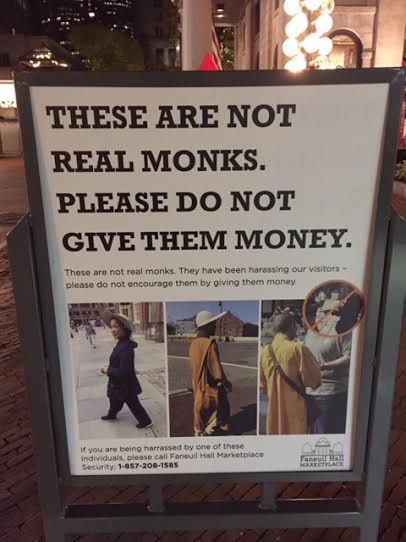 A sign at Boston’s Faneuil Hall warns visitors against the fake-monk scam.

Reports of this type of panhandling began surfacing around 2012 and over the years there have been an increasing number of news stories about the impostors appearing in cities in the US, Canada, Australia, New Zealand, Japan, and Cambodia.

In January 2015, The New Zealand Herald reported that, according to a woman who was trained to pose as a nun, a Chinese syndicate was behind the fraud. The woman had paid a fee of 10,000 renminbi (US$1613) to be trained and equipped as a fake Taoist nun, and a portion of the cash she collected was sent to the syndicate leaders.

The acts of the panhandling monks are seen as disrespectful to the Buddhism. Traditionally, Buddhist monastics accept donations of food they are offered while on on alms rounds.

There’s a simple way to spot a fake monk. A real monk will never aggressively beg for money.

If you see a fake monk aggressively panhandling you can register a complaint with the local police. In most cities police are unable to act unless they receive complaints from the public.