An excerpt from “Fearless Simplicity,” by Tsokyni Rinpoche, from In the Face of Fear: Buddhist Wisdom for Challenging Times, edited by Barry Boyce and the editors of Lion’s Roar. 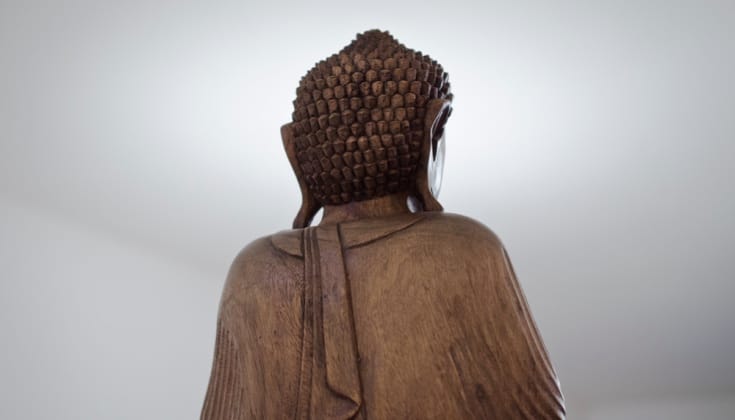 All this doubt, all this reluctance, is based on fear, fear of not being able to take it. “If I do this, if I end up in that situation, maybe I couldn’t stand it. Maybe I don’t know how to deal with it, maybe it will be too much. I’d better not.” There is a certain timidity in that fear, and this feeling of dread is a way of imprisoning oneself inside a lack of confidence. Once we confine ourselves to that prison of timidity, ego will take the key, lock the door, and put the key in its pocket. We become prisoners of ego.

To illustrate the difference between simply knowing things as they are and ego’s version, let’s say you are looking at a flower. It’s a beautiful flower, and it smells so sweet. The moment you see it, it delights you. If you’re feeling a little bored, it invigorates you; if you’re feeling a little chill, it makes you warm. The moment you look at it, the first thought is: “There is a flower.” Next, you know it to be a nice flower. The third moment: “I want that flower. I must possess it; it should belong to me.” In other words, ego enters.

Someone might say that it’s not possible for there to be any knowing without ego. That is a big mistake, a serious false assumption. Knowing is not a function of ego, but rather a natural quality of mind, in the same way that a flame is hot or water is naturally wet. Mind’s natural ability is to know. For the most part, ego steps in and takes over the knowing. It takes charge and then claims ownership, trying to make the knowing belong to itself.

Rather than simply allowing the first moment of perceiving to be as it is, ego wants to claim this knowing, to be in charge. In the moment of seeing the flower, to want to possess it is attachment. Or one could react with aversion: “I don’t like having a flower here; it will smell up the room. Let’s get rid of it. Don’t even put it on the table; throw it outside.” This way of being is not quite anger; it’s more dislike, a source out of which anger can grow. Or, if one does not really care to know whether it’s a flower or not a flower, but just shuts off from it, that is closed-mindedness or stupidity. These three poisons—attachment, aversion, stupidity—are ego’s constant companions.

Ego knows no moderation. And it doesn’t just stop with claiming ownership of experience—it wants to go all the way. For ego, this going all the way is endless. There is no stopping anywhere. If we could just remain with simply knowing whatever takes place, that would be fine. But ego is not happy with just that. It goes on and on: one thought, the next thought, and the third thought: “I want it. How can I get it?” then it wants to get involved in more and more activity. It becomes a habit, and that habit can be endless. When a habit is reinforced by being used again and again, it’s like we lose our freedom; every moment of perceiving seems an involuntary involvement. We get caught up all the time until we feel totally lost.

Ego always needs the support of the knowing quality; otherwise ego is nothing. Without the tool of the knowing quality, there is nothing it can do. When you dread doing a certain job, you are actually not afraid of the job, you are afraid of your emotions. There is never anything wrong with a job. It’s more the fear of not being able to deal with the emotions that come up during the job, the emotions that are provoked by being involved in a certain sort of job. What happens is we blame the job at hand, because we feel incapable of handling our own emotions that might arise while doing the job. But honestly, without knowing how to handle our own emotions, it doesn’t matter what job it is; we’ll always have that feeling of being inadequate, which creates fear. And this fear makes us not want to do anything. We become closed in; we refuse to be involved in anything.

Maintaining the notion of me is separating oneself from others. It’s as if one is holding on for dear life, being utterly concerned about me and pushing aside that which is other. This is ego-clinging. It is not the same as simply taking care of your business, making sure that the body is fed and able to experience and perceive. This basic process of taking care of oneself is not called ego, not at all.

In other words, when the body has to be fed, feed it; when it needs to be washed, give it a shower. But when something unfamiliar happens, it doesn’t mean you have to claim ownership of it and make it your problem. According to Buddhism, it is possible to function while being free of ego-clinging. It’s possible to live in fearless simplicity.