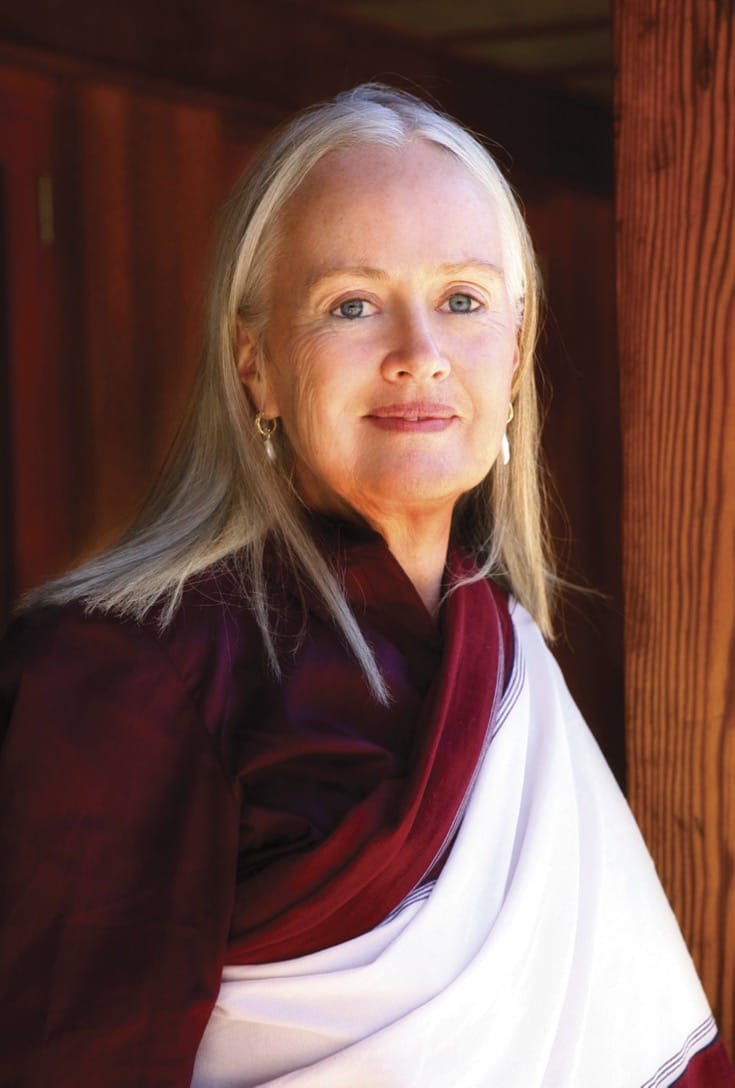 Lama Tsultrim Allione looks at how the traditional Buddhist practice of chöd — offerings one’s own body to frightening demons — can inspire us to let go of ego and practice joyful generosity.

There is a story of a rich man who said that he could not practice generosity because he was unable to give anything away. The Buddha’s advice to him was to begin by simply taking a piece of fruit and passing it from one hand to the other. The Buddha told him to notice how it felt to let the fruit go and how it felt to receive it. Using this method, the man began to experience both the joy of giving and the pleasure of receiving. Eventually he became a great benefactor.

Like that rich man, we may find that giving does not arise spontaneously and that we need to train in it. The ego-clinging mind always feels a sense of scarcity, so you might think, “I barely get along with what I have. How can I possibly give anything to anyone else?”

Chöd practitioners deliberately go to frightening places, such as a cemetery at night, and visualize making their body into an offering.

There are, however, many ways to practice giving that transcend monetary and material means. You could give something simple like a poem, words of encouragement, or an act of kindness. True generosity brings the giver a feeling of openness, along with the enjoyment in the happiness of others.

Even imagined gifts can be powerful. There is a story about the great Buddhist king Ashoka that illustrates this. The story goes that a poor child was playing by the side of the road when he saw the Buddha begging for alms. The child was moved to make an offering, but—with nothing else to give—he spontaneously collected some pebbles and, visualizing them as vast amounts of gold, placed them in the Buddha’s alms bowl. Due to this act, in his next life the child became the powerful, wealthy King Ashoka and benefited countless beings.

To take the practice of generosity a step further, you can infuse generosity with the view that there is no inherent separate existence in the giver, the gift, or the receiver. This view, known as the threefold emptiness, turns practicing generosity into something beyond simple virtuous action. It helps us not be attached to the outcome of giving, thus setting us free from any expectations.

We have the opportunity to feed, not fight, our demons with the nectar of love and compassion.

In chöd, a Tibetan meditation practice developed by the famed eleventh-century yogini Machig Labdrön, generosity is practiced for the purpose of severing ego-clinging. Chöd practitioners deliberately go to frightening places, such as a cemetery at night, and visualize making their body into an offering. Since these places provoke fear and clinging to the body, the offering is a direct confrontation with the ego. Many kinds of guests are invited to this imagined banquet, including personified forms of diseases, fears, and demons. As the guests arrive for the feast, chöd practitioners keep the view of three-fold emptiness and offer their body, which they visualize as nectar that satisfies all desires. The intensity of making the body offering in a frightening place is designed to push the practitioner into a state free from all clinging.

Although we may not be a chöd practitioner who deliberately goes to scary places, we still meet plenty of frightening inner demons, such as depression, anger, and anxiety. When this happens we have the opportunity to feed, not fight, these demons with the nectar of love and compassion. This goes against the grain of ego-clinging and allows the inner demons to transform into allies.

Here’s an idea: choose a day to devote to the practice of generosity. Maybe one Saturday from the time you get up until you go to bed, see how many opportunities you can find to be generous. Start by passing an object from one hand to the other mindfully. You might cook someone breakfast, offer your seat on the subway, make a donation, or spend some time with a child or someone having a hard time. See how many ways you can give in one day. Notice your motivation, how it feels to do it, and the reactions of others. At the end of the day, recall all the ways you were generous. Notice how you feel and what happened as a result of your generosity.

Lama Tsultrim Allione is the founder of the Tara Mandala retreat center in Pagosa Springs, Colorado, and author of Women of Wisdom and Feeding Your Demons. In 1970 she became one of the first American women to be ordained in the Tibetan Buddhist tradition. She was a 2009 recipient of the Outstanding Women in Buddhism Award.