Candice Tsuei explores what her journey to Buddhism has taught her about attachment, enlightenment, and life. 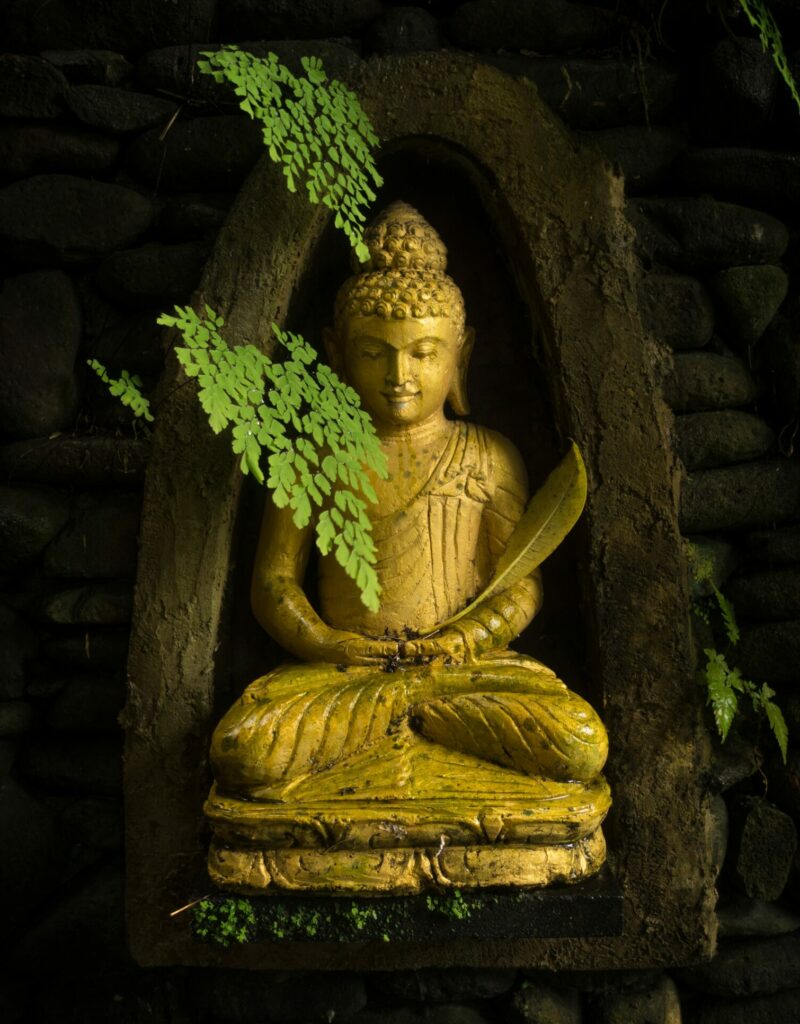 The first time I found myself on a meditation cushion, seated in front of a big statue of the Buddha, I asked myself “What is the purpose of my life?” That was 10 years ago, and if you had told me that I one day would become a Buddhist, I would’ve laughed and rolled my eyes.

I was raised in a culturally Buddhist family in Taipei, Taiwan, a culturally Buddhist city. One of the earliest bedtime stories read to me was Journey to the West, which tells the story of the legendary pilgrimage of Buddhist monk Xuanzang obtaining sacred Buddhist texts. When I was a little older, I would go to the temple with my parents to ask for blessings from Guanyin. Yet, I was never attracted to Buddhism.

When my family moved to Canada, I was eager to fit into a new culture. I remember my face turning red when I tried to explain the burning incense and the shrine at my house to curious classmates. I was so desperate to seem “normal.” At the same time, my confidence in scientific thinking and fascination with philosophy were growing. I found that monotheistic religions were just not my cup of tea. Buddhism was too superstitious for a critical thinker like me.

We all have the potential to be a buddha. The only difference between us and the Buddha is just that we have not realized it yet.

In my mid-twenties, I had a messy break up and was devastated. One day while scrolling through my Facebook feed, I stumbled upon a YouTube video titled “Love and Relationship” by somebody with a shaved head, dressed in maroon robes whose name I could barely pronounce: Dzongsar Khyentse Rinpoche. A monk talking about romantic relationships? I was instantly intrigued.

The one-hour teaching went by quickly, and I was captivated by his insight. In the next couple of months, I became an avid listener to the teachings of his I could find online. I was introduced to a whole new way of viewing the world.

It felt like when Neo picks the red pill from Morpheus in The Matrix and his whole world dissolves. These teachings made me realize that Buddhism was more than the perceived burning incense, vegetarianism, non-violence, and meditation — what lies at its core is the truth of reality.

As a newborn Buddhist, I decided that the next action item on my to-do list would be to go on some sort of yogic meditation retreat. I booked a one-way ticket to Myanmar, one of the few countries in the world where the Buddhist Vipassana heritage is still pristinely preserved from 2,500 years ago through dedicated lineages and systematic studies. I made a big announcement on Instagram that I was about to embark on a life-altering, off-the-grid spiritual quest. A calmer, happier, and wiser Candice shall be born! Hashtag, self-development. Hashtag, best version of myself.

Very soon I found that unlike my rosy fantasy, life at the retreat center was more like an unfancy, strict routine. A bell would wake us up at 3 a.m., and lights went out at 9 p.m. Every day, we practiced seven hours of sitting meditation and four hours of walking meditation. There was no food served past noon, so instead of watching my mind in the morning, I would be fantasizing about breakfast. Talking was not allowed, journaling was discouraged, and there were no books or internet access. I was so bored and desperate for some entertainment that I read the labels on all my toiletries at least 10 times. Even more challenging was the cold shower and the aged toilet. After a week of constipation, I started to imagine an escape plan.

Looking back, I feel that this trip was one of the best decisions I’ve ever made in my life, but not in the way I’d imagined. It didn’t level me up spiritually (if there even is such a thing), but it did open my door to Buddhism. I discovered it’s more than just intellectual exercises and abstract philosophies — it’s something I can practice and experience directly.

A few months later, I heard that Jetsunma Tenzin Palmo, a Tibetan Buddhist nun, was going to teach in Bir, India. I’d read her book Cave in the Snow and was inspired by how she went from a teenage girl in London’s East End to spending twelve years alone meditating in a cave 13,000 feet up in the Himalayas. I knew I had to meet her.

After a twelve-hour flight followed by another twelve-hour bumpy car ride, I arrived at Deer Park Institute and had the chance to talk to Jetsunma. I asked her, “Why do we often feel hurt in love?” With a smile, she said, “A lot of the time, we think that we are in love with someone, when in fact we are just being attached to that person. Love says, ‘I wish you happiness, with or without me,’ while attachment says, ‘I want you to make me happy.’ Don’t worry, even though we might not know how to love fully yet, we can always aspire to love better.” To this day, I still contemplate on these words.

I learned from that trip that there is no separation between spiritual life and mundane life. The best place to put spiritual learning into practice is in the everyday grind. What is the use of being tranquil on a mountain top if we lose our shit the moment we are in the trenches? I relocated back to Taipei, found a job, and threw myself back into the 9-to-5 hustle. I realized I didn’t need to be wandering around in Kathmandu in colorful clothes and strings of crystal beads to prove myself as a Buddhist.

So what does it mean to be a Buddhist? In a nutshell, the Buddhist path can be encapsulated by the Buddha’s teachings of the Four Seals, or four characteristics:

1. All compounded things are impermanent.
2. All emotions are painful.
3. All phenomena lack inherent existence.
4. Nirvana is beyond extremes.

As Dzongsar Khyentse Rinpoche writes in his book What Makes You Not A Buddhist, as long as we agree with these four seals, we can call ourselves Buddhist. We may not want to identify as one, but we are already walking the same path as Buddhism.

The Buddha’s teachings are not only modern, but avant-garde. They are as applicable to my life in 2022 — one that is continually bombarded with phone notifications, interpersonal demands, seemingly endless Covid despairs, and new metaverse trends — as they were 2,500 years ago.

Buddhism is not interested in handing us a guidebook to help us feel worthy, validated, and live happily ever after. It goes one step further by pointing out a way for us to transcend even the concepts of worthiness, validation, and happiness from the root.

Before encountering Buddhism, I didn’t know that I had a mind. Even now I still often forget. Most of the time when a thought arises, instead of hitting the pause button to observe what is happening in my mind, I voluntarily let it yank me around from one moment to another. To take back the control of mind from this unceasing flow of distractions, Buddhism prescribes mindfulness.

In the last decade, mindfulness meditation has become not just a trendy buzzword, but has also evolved into a billion-dollar industry. The long list of benefits mindfulness offers is nothing but eye-dazzling: relieve stress, lower blood pressure, improve sleep, enhance mental health, and many more. While all these benefits are great, from the Buddhist perspective, they are only bonuses. One main reason why Buddhists practice meditation is to create a momentary gap so that we can short circuit the mindless, habitual reactions and see the reality as it is — fully without any prejudice or fabrication. The mechanism is nothing exotic or mystic. Most importantly, with practice, we can all do it.

For example, we may wake up one morning feeling cheerful, and ten minutes later, we accidentally pour too much milk in our morning coffee. Before the tinge of annoyance arises and plants the seed for full-blown anger, we simply note the rise of this annoyance. We don’t entangle with it, don’t judge it, and don’t suppress it. As the Zen teacher Shunryu Suzuki would say, “Leave your front door and your back door open. Allow your thoughts to come and go. Just don’t serve them tea.”

Through meditation, we learn to see that all thoughts and emotions are essentially projections of our mind, without labelling them good or bad. We realize that these projections don’t necessarily bind us; it’s the attachment to these projections that bind us. As we deepen our practice, our fixations are revealed and our obsessions undo themselves like a snake uncoiling. Eventually, we can go beyond all our references, judgments, and mind games. That is what Buddhism calls enlightenment — no halo, nothing woo-woo. We simply wake up from our delusions and see the truth as it is.

Though the concept of enlightenment may seem unfathomable, through practice we can all discover the enlightened state that has always been within us. Buddhism tells us that all sentient beings have this innate wisdom called buddhanature. We all have the potential to be a buddha. The only difference between us and the Buddha is just that we have not realized it yet.

Now, when I take my seat in front of the same Buddha statue I did ten years ago, I understand that the whole design of Buddhism was never meant to answer my question What is the purpose of life? Instead, Buddhism tackles an even bigger question, What is life?

Manufactured in Taiwan, assembled in Canada, Candice first became interested in Buddhism while traveling in Burma in 2014. In the following year, she met Dzongsar Khyentse Rinpoche and became his disciple. Candice is currently working for Khyentse Foundation and is studying for her master’s in Buddhist Counseling at Hong Kong University. She also helps manage the daily meditation initiative Dhyana Daily and will be co-hosting the podcast Dharma Radio that is going to launch at the end of this year.