Teresa Shimogawa shares how she found her way to Buddhism after the death of her husband and how the dharma became a flotation device to save her from drowning in despair. 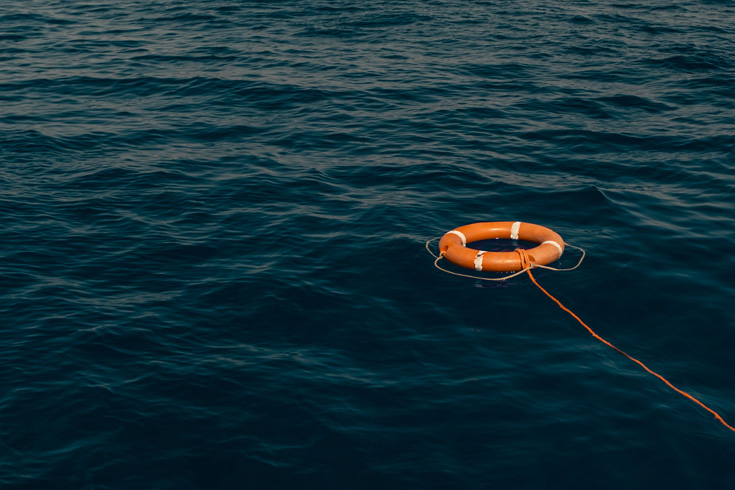 After a year of distance learning during the global pandemic, we returned to regular, in-person school. On the first day, I posed with my three children in front of the mascot for our traditional back-to-school photo. The previous school year had been a tedious soul-draining year full of unknowns and stress. But, we were healthy. We were still here. We were eager and ready for this next chapter, albeit nervous. I posted the picture on social media. Somebody commented, “You always look happy.”

What a compliment. It felt better than you look like “you look like you lost weight” or “you look so pretty,” all of the usual compliments that would stroke my ego. But how could I look happy? I felt like I had aged a hundred years during quarantine.

There was a time in my life when a simple back-to-school photo would have had me ugly crying in the shower at night from the shame of not having my children’s father there to share in this moment. For days, weeks, months, and even years after my husband unexpectedly passed away, whenever I would show up to places with intact families and the kind of normalcy I would never have again, I felt irreparably broken. I hated that I had been such a planner throughout my life — planning each child down to the day — only to find myself raising a family alone. I struggled to understand why the universe had dealt me these cards.

I was so jaded that I refused to chant or bow whenever I attended service. I liked Buddhism, but I wasn’t going to call myself a Buddhist.

Weeks after my husband passed, I happened to read You Are Here by Thich Nhat Hanh. I actually started the book this summer before, back when my life was “normal” and there was no urgency for life’s greatest answers, but now I was drowning in my agony and looking for a flotation device. I drew a star next to the line: “If there are things that are causing you to suffer, you have to know how to let go of them. Happiness can be attained by letting go, including letting go of your ideas about happiness.” It seemed easier said than done.

I think about that previous version of myself, desperate to find the antidote to her suffering. She would have never in a million years believed that she could be happy again.

But here I am. Possibly even happier than before. I feel eternally grateful to Buddhism for giving me the dharma to light my path moving forward. It is what keeps me focused through the good and the bad and the ups and downs, helping me make the most out of my life.

I’m half-Palestinian, half-German woman who was baptized Melkite Catholic. My grandmother was born in Nazareth — a very religious, holy city that I have visited numerous times. I tried to be a Catholic. Somebody even made me their child’s godmother. I just could never shake the feeling that it was trying to control me rather than lead me to my liberation. Consequently, I became suspicious of all organized religion.

It was easy to agree with the ideas of Buddhism on paper. You could say I was even an armchair Buddhist before my husband passed away. I read a lot of books. We sent our children to dharma school. But, I often let him take the children on Sundays while I stayed home with the baby. I didn’t think I needed anything formal. I was so jaded that I refused to chant or bow whenever I attended service. I liked Buddhism, but I wasn’t going to call myself a Buddhist.

When I found myself a 34-year-old widow with a 13-month-old, three-year-old, and a six-year-old, I became gutted by my despair. I didn’t have the tools to deal with the magnitude of that kind of suffering. For the first time, I realized I needed something, but I didn’t know what.

Once my husband was gone, I was tasked with taking the children to dharma school on Sundays, fulfilling an obligation to him in the agreement we made about how to raise our kids. That is when I began to attend service on a regular basis — as the children’s chauffer. week after week, a baby strapped to my back, squeezing across pews while the sangha chanted, because it was such a struggle to get everyone out the door on time and we were late again. My heart pounding, beads of sweat on my brow, wrangling squirrelly children, feeling like a failure at everything. But we showed up. And I did a lot of listening. Accidental listening at first.

Turns out, even though I had no intention of partaking in Buddhism, it is extremely appealing to someone emotionally bleeding to death. The words resonated deeply. It was like they were written just for me.

I didn’t understand everything. There were many questions at first. But I knew how it made me feel. Going to service on Sundays, being surrounded by the sangha, smelling the incense, hearing the chanting, and listening to the Dharma talks — it all gave me a profound sense of comfort. It felt centering. A refuge, if even from myself and the chaos in my head for that one hour a week.

Nothing is guaranteed. Life is fragile, each moment fleeting. All we know for certain is what we have right now.

That’s when it clicked. I figured out my “why.” I needed Buddhism because it had taught me tools to refocus how I saw my life. It gave me the perspective I needed to live in a meaningful way. I had been stuck at a crossroad: wallow in my pain and begrudge reality, or embrace change and opportunity to heal and grow as a person — arguably becoming a better version than who I used to be. Buddhism became a road map I didn’t know I needed until I was completely lost.

I learned to embrace impermanence and let go of my expectations. Nothing is guaranteed. Life is fragile, each moment fleeting. All we know for certain is what we have right now.

I’m reminded of Rennyo’s “White Ashes.” he wrote, “By so understanding the meaning of death, we shall come to fully appreciate the meaning of this life which is unrepeatable and thus to be treasured above all else.”

That’s why I find myself happier than I was before my husband’s death. It’s not that my life is all sunshine and rainbows. There are still storms and many days with questionable forecasts. But I have a new appreciation for each day, and that has made all of the difference.

As I took a deep dive into Buddhism and began to consider myself a practitioner, I learned those photos of me alone with my children were not reminders of what I didn’t have. Rather, they are evidence that I have continued to live fully in each moment, witnessing many milestones with my family, experiencing the highs and lows of human existence. Not everyone is so lucky. I don’t have to be a sad, widowed single mother. I am happy, because I learned to see the moment differently. Happiness is being present and grateful, and being able to find the silver lining in all that we do. It’s an ongoing excavation project. Something we work on each day. I’m not happy every single moment, but if my happiness is measured by anything like how we track the stock market, I would say the trend is consistently high. I’ve been able to use Buddhism to redirect my negative thoughts, which prevents me from getting stuck.

I am so grateful to my husband for giving me both my children and Buddhism. It’s like he somehow knew exactly what I needed to live my life without him.

In the back-to-school photo, I was wearing a lotus necklace. I love the symbolism of the lotus: something beautiful growing out of the mud. On any given day, hope and new beginnings can spring from the depth of our despair.

Shinran Shonin said, “What a joy it is that I place my mind in the soil of the primal vow and I let my thoughts flow into the sea of the inconceivable Dharma.”

I appreciate the imagery of putting my perseverating mind and thoughts into this sea, letting the Dharma remind me of how to let go.

Excerpted from Crossing Over to Jodo Shinshu: Discovering the Buddhist Path, published by Jodo Shinshu International.

Teresa Shimogawa is a minister's assistant at the Orange County Buddhist Church. She writes and teaches in California, where she resides with her three children.