A smell could take Marianna Pogosyan back in time, or she could stay present to this precious, fleeting moment. 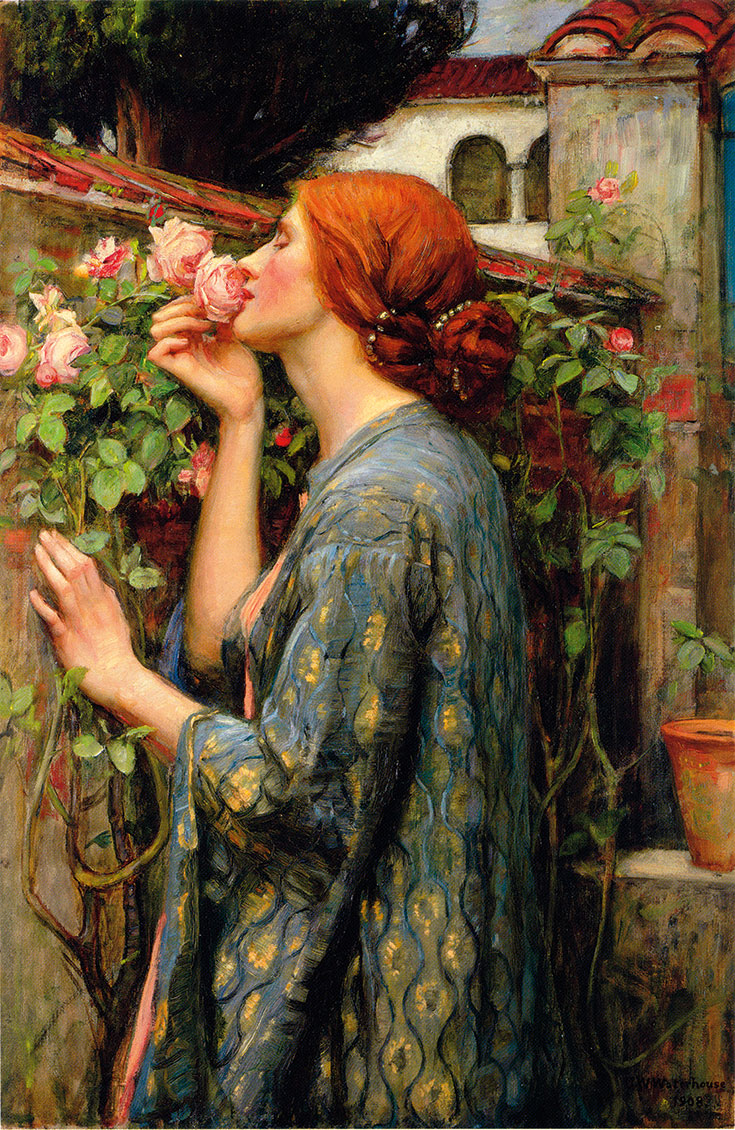 Art by John William Waterhouse, “The Soul of the Rose,” 1903

The last time I had used my time machine was one year ago, on some Tuesday morning in early March. My husband and I often shared the drive to work, and it was one of my favorite hours of the day. He’d dream about free highways and self-driving electric cars. I’d fret about the kids going to bed too late. Sometimes, he’d watch me in his rear-view mirror as I smeared color on my lips. Finally, I’d pull out my time machine, pop open its coral lid, and bring it to my neck.

One spritz on the left.

One spritz on the right.

Suddenly, the air around me would bloom with notes of jasmine and gardenia, and in a Proustian instant, I would be transported across decades and continents.

And there I am, age fifteen, lounging on a Hawaiian beach. My bronzed feet are sticking out from the white sand my younger brother is piling on me. My father is in the water, lecturing a family of tiny fish assembled around his giant legs. My mother is next to me, with a towel over her shoulders, thumbing through the magazine she bought at the airport. Quivers of ukulele merge with the purr of the waves. The air smells of delicate flowers, just like the ones in my time machine.

Neurobiologically, smell and memory are a well-traveled road. Which means that in some post-pandemic future, thanks to our olfactory-hippocampus superhighways, a whiff of alcohol sanitizers could send us back here. Again.

“What do you think?” My husband’s voice dispelled my mirage of perfect happiness on that Tuesday.

“About why I have this weird feeling that I can’t get enough air?” he grimaced, rubbing his hand on his chest.

But he had his own hypothesis.

“It’s your perfume!” he blurted, opening the windows around me. “You can’t spray that thing in the car anymore. It gives me asthma.”

There was not a trace of my perfume left in the car when we saw each other again. But he still could not breathe. On our way home, we stopped at the ER. He had no fever, so they sent us home, where we pulled the kids out of school and locked our doors. A few days later, frail and shaking, we woke up to a new world of pandemic.

A year on, it’s still the same new world outside our windows.

I bring the silver tip of my time machine to my neck.

One spritz on the left.

One spritz on the right.

And there I go again, tumbling through time and space.

But instead of lying next to my parents on a Hawaiian beach, I am standing in front of my Tuesday morning Cultural Psychology class. We are discussing “untranslatables”—words from different languages with no exact equivalents in English.

The magic of odor-induced time travel comes down to evolution. According to recent research, as our sensory apparatus rerouted to accommodate our growing brains, olfaction appears to have escaped the great rearrangement.

As a result, our sense of smell—unlike the rest of our senses—maintained a direct access to the hippocampus, the memory seat of the brain. Neurobiologically, smell and memory are a well-traveled road. Which means that in some post-pandemic future, thanks to our olfactory-hippocampal superhighways, a whiff of alcohol sanitizers could send us back here. Again.

Which moments, from a year of loss, would you wish to revisit?

Given the choice, I’d plot my time–space coordinates to when my grandmother’s words would finally reach me from across the planet.

“Don’t let your heart get narrow,” Grandmother would conclude our Zoom conversations about war and love, food and grief, everything and nothing. “Make a ring from my words and hang them on your ears,” her halo of white hair nodding on my screen. “Keep your heart wide.”

Grandmother, who in her nine decades had become a reluctant expert in loss, was not specific on the how of her insistent counsel. Apparently, I had to come to it myself.

It wasn’t difficult to keep things wide and spacious when skies were Hawaiian blue. Human hearts opened to joy.
Like heliotropic plants following the sun, they turned toward light.

But when the skies darkened and gales howled, hearts preferred to stay unabashedly narrow, with their locks
intact and guards at the ready.

Last year, the gales didn’t stop. I made peace with the increasingly fragile disarmament treaty I had with my own heart and went for a walk.

In the stretch of woods behind our house, the air smelled of fresh rain. The trees, with their straight backs and curved limbs, were reaching toward the clouds. Some of their trunks looked like the legs of elephants, ancient and stable. Others looked like young storks, nimble and restless, ready to flee with the first kiss of wind. The red-breasted robins had volumes to sing about. The woodpecker didn’t bother with their spring tales.

He had bark to drum on, lunch to secure. Life spewed forth from the pores of the forest floor. My eyes stumbled on color. Purple crocuses, lime moss, white snowdrops, yellow daffodils had overpowered the thawing carpet of dead leaves to announce the change of seasons.

A child giggled. A young labradoodle, blissful for no reason, ran up to me, his caramel-colored ears flapping all around him. He had the same trusting brown eyes as the dog we had just lost.

He bumped his wet nose against my hand, just as Teddy liked to do. He must have smelled the treats that were still in my winter coat pockets. Even his isn’t-this-day-marvelous bark sounded familiar. I swallowed through my smile and wondered if it was possible to love someone at first and last sight. Yes, I decided.

As I watched him bolt toward his owner, the “untranslatables” from my classroom board suddenly swam into the tasty forest air. There it was, the Greek word charmolypi that married happiness and sorrow; there it was, the Japanese mono no aware that alluded to the pathos of impermanence; there it was, the Latin memento mori, the reminder of death and hence, the reminder that as long as breath danced in and out of your lungs as you went about your Tuesday mornings, leaving your footprints on Earth’s four-billion-year-old skin, you were one with the miracle of life. A precious and rare life. And while it is nothing short of miraculous that a network of 86 billion neurons could send us flying to the past on a whiff of a scent, perhaps the greatest gift was in staying put with the fleeting moments in real time.

Because it’s here where we discovered that even the most imperfect of years teemed with micro-bursts of eucatastrophe (English: a sudden happy resolution of events).

Even the queens of the heliotropic flora know how to stay put. At each dusk, mature sunflowers saluted the sun’s
first rays, and kept their majestic heads facing east, once and for all. It’s as if a childhood of tracking the rise and fall of light had them convinced that the sun was always there, whether they saw it or not.

There is a ransom life demands for the proof that the good we seek, just like the sun, is all around us.

The same humble ransom that helped Grandmother survive her gales of unspeakable grief.

The heart, again and again, was to be beckoned to open.

If not as wide as the world itself, then wide enough for any wonders strolling idly, looking for things to do, to slip quietly in.

Born in Armenia and raised in Japan, Marianna Pogosyan currently lives in the Netherlands, where she is a lecturer in cultural psychology. She is a consultant to international executives and their families on psychological adaptation to life far from home.